I'll take a short break from this box for a bit after this post for either a trade post or some repack stuff.

Anyhow, the title of this post comes from the fact that while most of the 900 or so miscellaneous cards will be sent to the #supertraders, there were a handful I'll be keeping. And those are the ones in this post.

The kings of this portion of the box, at least in terms of volume, were Ken Griffey Jr and Frank Thomas. I opted to keep one of each for the ol' random baseball binder, and settled on these two. 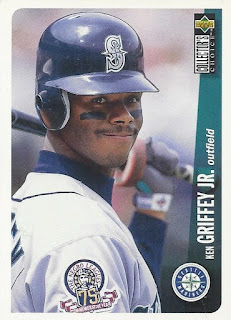 This one I kept because it was considered a promotional sample, as per the back of the card, but the front did feature a beautiful look at a patch that saluted the 75th anniversary of the Negro Leagues. 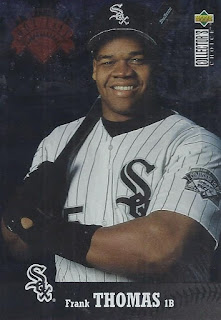 As for the Frank Thomas, it was really was just a pick more or less at random. If I had to say why I liked it, it might just be I liked the chrome-ish design of this. 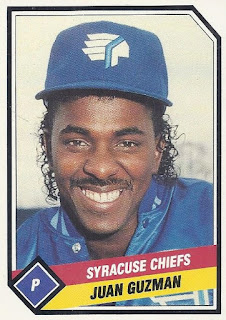 This could be the only non-set Blue Jays card I kept. Guzman sure rocked the Jheri curl back in the day. 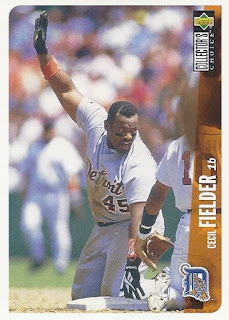 Another random card, this one picked just because I love that a card of Cecil Fielder features more of a base-running photo as opposed to a slugging photo. 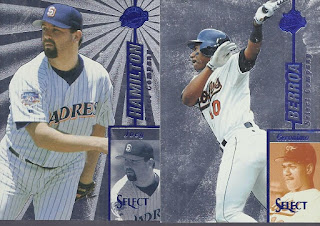 Shiny! These are Select Company parallels. 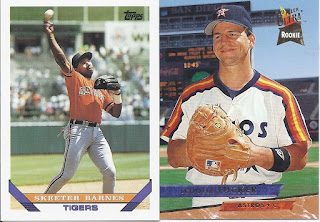 A Scooter! A Skeeter! Are you humming the Muppet Babies theme now? If not...

Now here is a really random grouping of MLB Canadians. 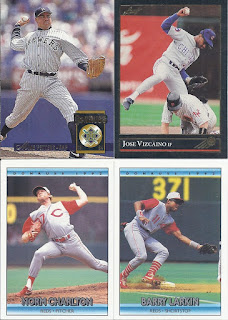 This will be the last grouping of cards from different sets, featuring some throwback uniforms. The Fetters may have the best photo of the bunch, but I do like how the Giants one squeezed its way onto another team's card to make it a keeper. 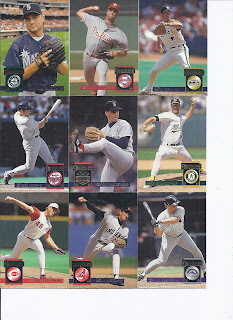 For 1994 Donruss, I went for somewhat of a different theme. An album page worth of players that I'd never heard of before. 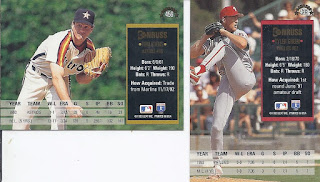 And looking at the backs of the cards, with both horizontal and vertical orientation on the base cards, means that this must have been really annoying to collate. 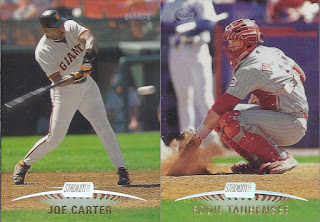 Not too much from the Stadium Club cards, which were the newest among the miscellaneous cards. I did add my first Joe Carter card where he's on the Giants, and an always welcome baseball addition to my masks binder. 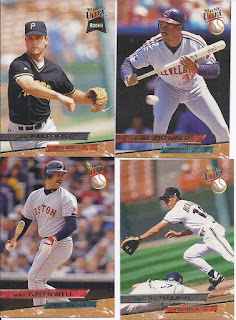 Off to '93 Ultra with these 4 cards. You can't really pass on a rookie card of a knuckleballer when it is presented to you. From there, you get a really strange bunting photo (but maybe not even the strangest in this post) when the ball looks to be sailing past Thomas Howard. Mike Greenwell appears to be none-too-happy with whatever call the umpire made, and the theme here of unflattering photos continues with Mike Benjamin as not only is Craig Biggio safe, but it looks like he's going to have to make a good catch in order to prevent the ball from heading to the outfield. 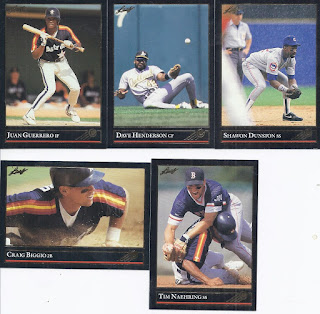 I'd take Thomas Howard's bunting style over Juan Guerrero's. From there, a nice sliding catch card for Henderson. I'd pulled the base version of the Dunston before from a repack, and love the pouring rain in the photo. I guess that completes the rainbow for this card. Two cards in this post featuring Craig Biggio sliding. At least he's the star of this one. One of his teammates tries to be the star of the Naehring card as well. 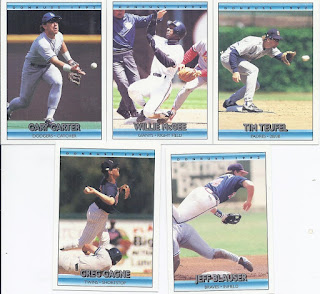 Finally, some 1992 Donruss ends it. Gary Carter might be listed as a catcher, but he's not wearing the catcher's gear while making a defensive play. That's something you don't see much of. I like the crowded nature of the McGee card and the ivy background on Teufel. The final cards of the post feature a pair of spring training turning two plays, complete with a pair of hard slides into second.

Quite the variety! But the #supertraders need not fret too much, as there are still a lot of cards where these came from.
Posted by buckstorecards at 07:22