4 more packs. Of which random.org coughs up these:

That means these will be the packs posted today. 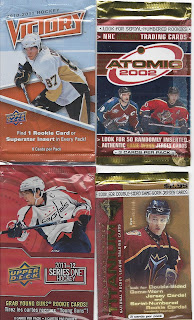 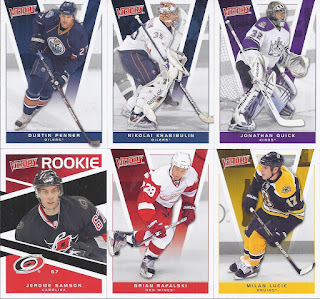 And this is not the most interesting way to start off the post. Both mask cards are dupes for that collection, and the rookie card is of someone who spent last season overseas. I guess the Lucic is the best one here, but that's not exactly a major win. 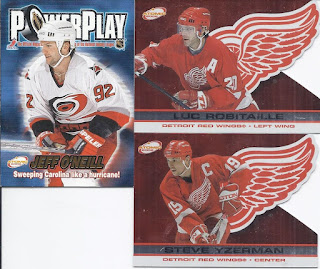 So much for variety, as two of the teams from the first pack repeat. But I love the die-cut base in this, even though set-building pack searchers could have used it to determine which team(s) were in the pack. Although I won't complain about the content in terms of players.

More Wings content in the third pack, but I finally land a sure keeper with Ron Tugnutt bound for the mask binder. 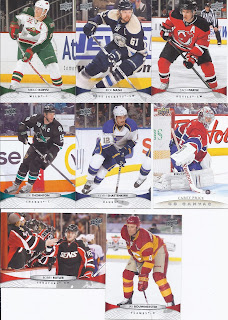 And flagship wraps up this post. While I was unable to grab a Young Guns card out of it, landing a nice canvas card instead. While there are some good YG cards available (Landeskog, Nugent-Hopkins, Couturier), I'm probably happier with the Price as opposed to a prospect that might not even be playing on this continent any more. The Bobby Butler is one of my favourite base photos among the Sens cards (despite a uniform better left forgotten), and beside is another favourite photo with a Heritage Classic jersey, despite the fact I have pulled several copies of this card.

And the last packs go later. Strangely, the two packs with the hits will wait until the end. But, that is the way random.org picked them.
Posted by buckstorecards at 03:02