2016 Adventures in Repacks: Part 14 - When The Expo Met The Dollar Store

And another Expo is in the books for me, and the goodies will be shown off here over the next little while.

When walking around, I noticed that Presstine Marketing had a booth there. You'd know them as the company that supplies Dollarama with their repacks. And they had something that I had yet to see at the Dollarama: 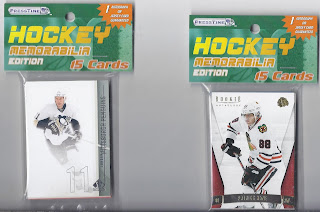 They're a little more expensive that their standard offerings, but you are guaranteed a hit per repack. I opted to risk $3 on each of them. 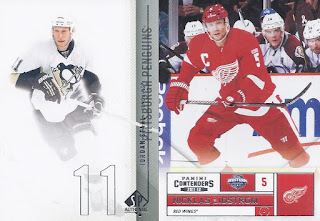 The visible cards the first. Not much different than you'd see in the standard $1 hangers. 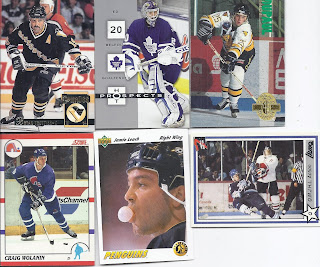 And here's a sampling of the hidden cards. There's a few nice cards among these (and yes, there was the obligatory 1990 Bowman). Ed Belfour can go in the mask binder. Wolanin in the Rangers alum binder. And you have Jamie Leach blowing a bubble. But, my fave in this bunch is easily the Cosmo Dupaul. Not only does he have an awesome name, he was a draft pick of the Senators, and was listed on the back as such. But even if he was undrafted, the guy is named Cosmo! 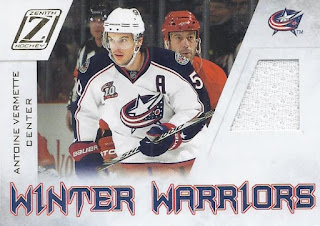 And the hit. Not the most spectacular, but still a hit. 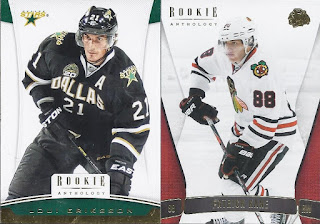 The visible cards in repack #2.

The middle cards weren't as interesting as in the first. But I still got a Utica Devils jersey making an appearance. And I did feel like showing off the 1994 Donruss card, since the all silver portion is the only part that shows the player's name, and it is really tough to see unless the angle is right. For those that don't want to strain their eyes, the card is of German Titov. 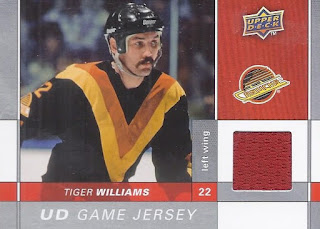 But the hit was better. It might be event worn, but it is a swatch from the PIM King! That's a nice little keeper.

And there you have proof I can't escape repack products!
Posted by buckstorecards at 17:25