At the Fall Expo, I picked up a cheap box of 2008-09 Victory. As of now, I'm one SP'd rookie card away from finishing off the set. Seems like a great time to try for another one. 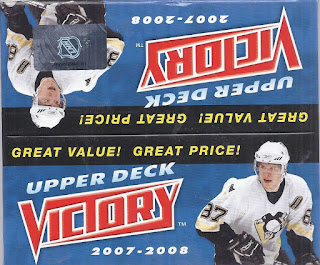 Let's go back a year this time. 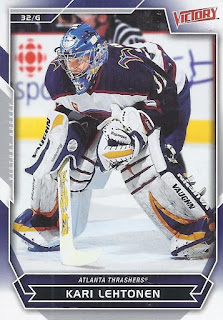 Base Cards: 174/200 (no dupes). I like this year's design more than most, with the backgrounds visible, and the colourful borders making for easy set collation, and a nice look when they're together in a box. The photos are really cropped tightly, but it looks good in instances like this, where the goaltender is crouched. 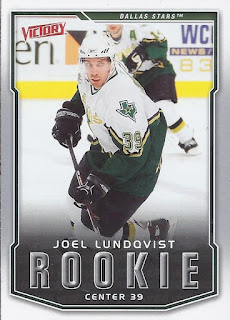 SP Rookies: 18/45- What the box advertised, I got, with these falling every other pack. Joel is Henrik's twin brother. He did get 3 seasons worth of NHL action in Dallas, so he's not quite a Keith Gretzky type. 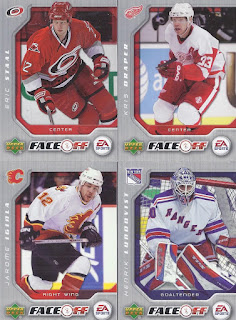 EA Faceoff: 4/4 - I'm not too crazy about advertising cards taking the place of base cards in a set, but at least these have players on them. 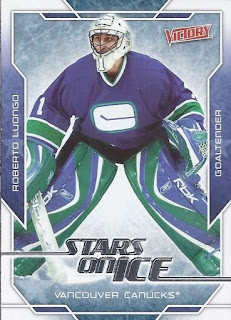 Stars On Ice: 9/50 - Inserts should not be blander than the base cards. 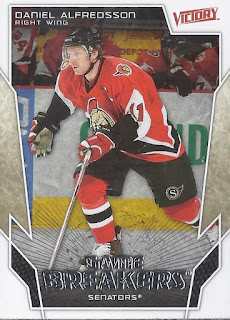 Game Breakers: 9/50 - At least they seem to have done something with these, even if they are very similar to the base cards. 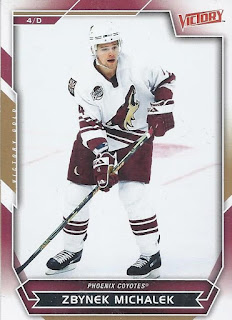 Gold Parallel Base: 1 - These fall at a rate of one per box. It isn't the most exciting player to get the parallel of, but at least he's still in the league, and is now on his 3rd go around with the Coyotes. 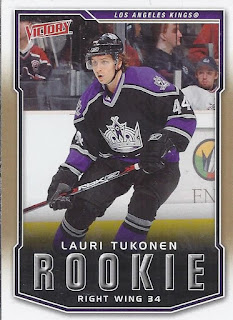 Gold Parallel Rookie: 1 - These parallels are a slightly tougher pull, at about 1 or 2 per case. I hadn't heard of this guy, and since he has only 5 NHL games to his credit, that's probably why. Still, it is always nice to get a tough pull of a card from a lower end product.

After combining these with the cards I already have, I'm at 184 base cards, and 24 of the 45 rookies, with the major names being Ryan Callahan, Jack Johnson and Rich Peverley. So, this base shouldn't be too tough to reach. I'll probably update my set want lists on the side over the next few days.

Posted by buckstorecards at 13:27