And these changes are not really for the better, as some of the Surprise Bag inner repacks have dropped a card from their content. That doesn't mean I won't be adding them to my basket their as frequently, though. Just that some of the team dumps I do on collectors on my trade list might be a tad thinner than usual. 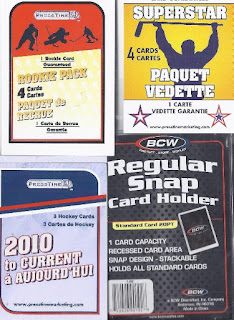 For those familiar with these from previous posts, the superstar pack is now 4 cards, and the 2010s pack is now 3 cards. The snap card holder is new to me, and since I've severely lagged on picking up a magnetic for the Larry Bird auto, it now has a home in this. 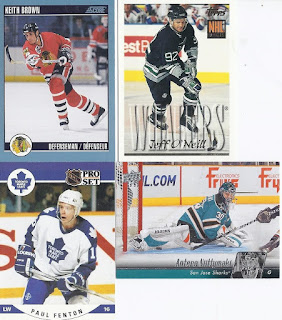 Starting with the rookie pack. I still like finding cards of defunct teams lurking in these, so it is a decent one for me with the Jeff O'Neill. A quick look at Shoebox Legends' zistle wantlist shows it isn't a need, so this one's a keeper for me! 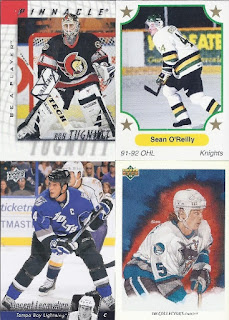 The Superstar pack hopefully considers that Vincent Lecavalier is the superstar contained within. I'm just happy to add a new card to my drawn cards mini collection with the Wilkinson, and a new Sens card with the Tugnutt. 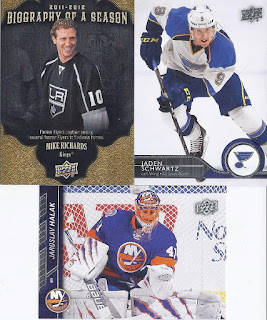 I guess getting one of the three cards in the 2010s pack as a keeper is a good average, with yet another Mike Richards on its way to the Rangers alum binder. 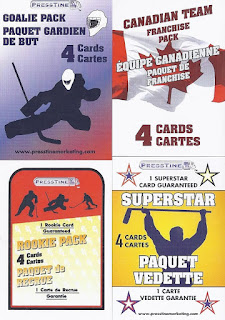 At least the goalie pack remains the same with 4 cards. The Canadian Team Franchise pack is a new thing, though. 3 of 4 cards heading for the mask binder is a good average. Osgood is likely Michigan-bound in a future Too Many Verlanders/Manninghams trade. 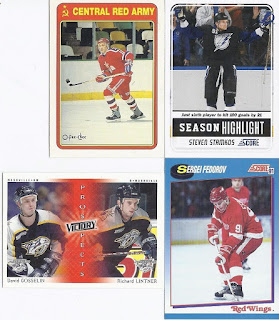 The Rookie card might not be of some mainstream names, but it is at least an interesting card. 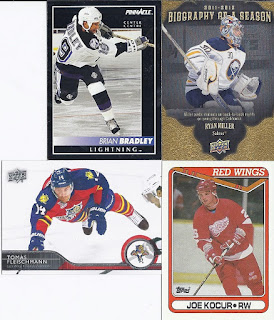 And the promised Superstar is a mask binder certainty. 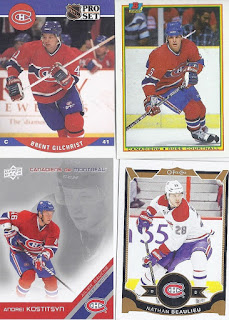 Since the previous franchise packs promised either a Canadian team or Original 6 team, this was really indistinguishable from its previous version. I think every one of the 2011 Montreal history cards I have were from these type of repacks. And there's my second card from this season's releases.

I could complain about one fewer card in some of the repacked stuff, but I don't think that will change my purchase plans that much.
Posted by buckstorecards at 09:39