With last night's bizarre dollar store/Expo cross-over out of the way, it is now time to dig into some of my additions to my collection. While I won't bore you with posting all the set builders I knocked off my 2016 want lists (Damn you Mark Teixeira!), I will probably spend the next while posting goodies from the show.

Of course, since I have a pile of stuff to get through, I'm starting with a single card. 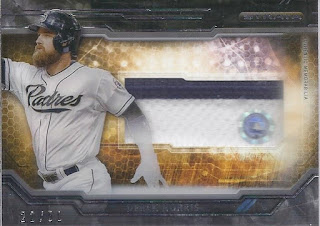 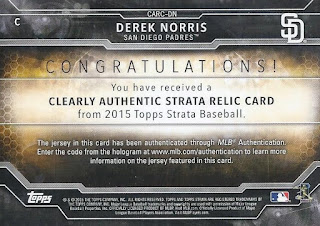 When I learned Derek Norris was on the Strata checklist, I had to go looking for one of his cards. I was able to land one of the numbered parallels from the set, and did so for significantly cheaper than even the base version of this is going for at COMC.

The big draw in the Strata stuff in this season's release has the MLB authentication sticker on it. That means I can head to MLB Authentication, enter 138467 JB, and learn that the jersey is from this game:

I'm guessing this was the most interesting game of his career, at least in terms of peaks and valleys.

In his first four at-bats, he earned a golden sombrero.

For his fifth, he hit a walk-off grand slam.
And if that day doesn't qualify as the ultimate outhouse to penthouse moment, I don't know what will. He's the first player to get the sombrero and hit a walk-off slam to win it.

As a bonus, that's also the moment featured on his Superstar Celebrations card that I pulled from Opening Day a few weeks back. 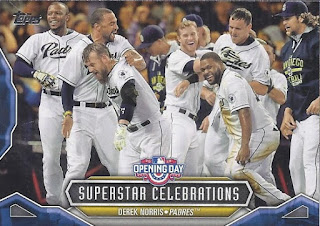 That makes this an even more interesting 2/14 addition. The celebrations card does not mention the sombrero.

Plus, they washed the Powerade off before making the relic card. Bonus!
Posted by buckstorecards at 09:01