I always seem to end up shelling out for one costlier box at the Expo. 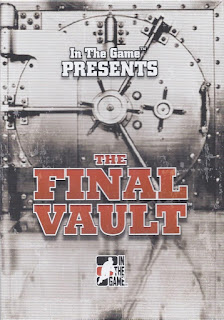 I was debating between this buyback-ish product, and the new Fleer Showcase. The latter had really been boom or bust from what I've seen, so I went for this, thinking I'd at least land some keepers. The box promises 1 Masked Men card, 4 autographs and 5 relics. Let's go in the order they were in the box. 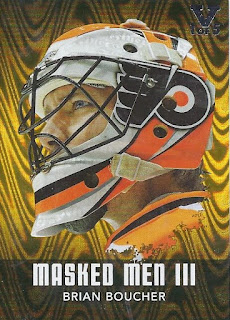 And here's the masked men card. A bland one, but still going into the masks binder. 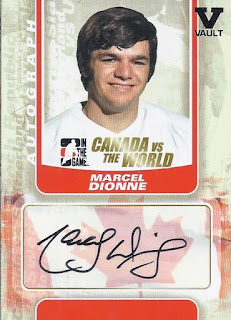 A nice start to the autographs portion of the box. A HOFer and one of the leading scorers in league history. Definitely a keeper as the first hit. 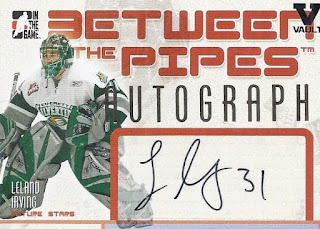 Not the biggest name out next. Leland had spent a little time with the Flames, but went overseas for two seasons before returning this year to play with the Wild's AHL affiliate. Still, a mask binder addition. 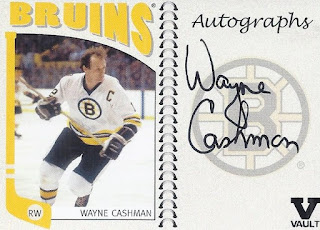 Next up is a surefire addition to my penmanship collection. Every letter is legible and it is a Bruins card. 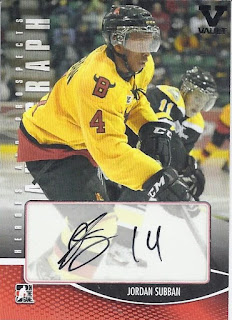 And to wrap up the autos, the third Subban brother. He was a 4th round pick of the Canucks, and a teammate with brother Malcolm while in Belleville. He spent this past season in the AHL.

Really only one dud card overall in this batch with the Irving, and even that will find a home. Relic time! 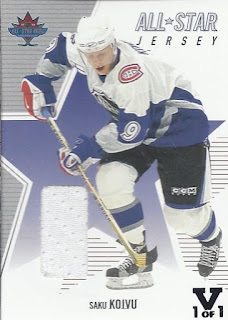 Not the most spectacular start to this, but at least the back dates this to the 1998 All-Star Game. This might be stamped 1 of 1, but the numbering isn't exactly that.


Black 1/1 Foil Stamp means that there are at least six cards in the product. 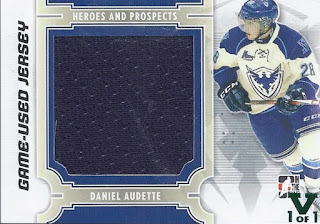 Green 1/1 Foil Stamp means that there are at least three cards in the product.

My second hit doesn't even have a wikipedia page of his own. Daniel was a 5th round pick of  Canadiens and is the son of former NHLer Donald Audette. He just wrapped up his QMJHL career and is now with the Habs' AHL affiliate in St. John's. 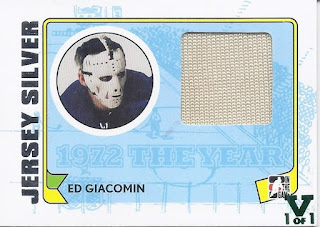 Now that's more like it. Obviously a vintage swatch, and one of a Hall of Famer. 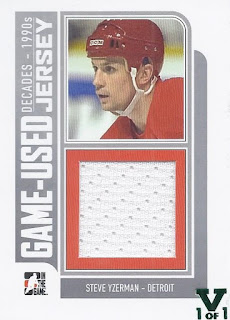 Back to back HOF relics. 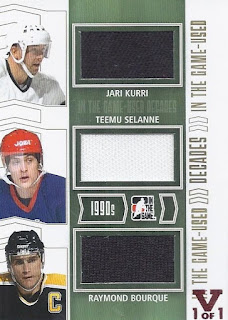 And the Hall of Fame run continues with 2/3 on this card (and Teemu will be getting in as soon as he's eligible). Other than these apparently being 90s swatches, I can't really make a connection between the three players on this card. They were never teammates.  They're not countrymen. They don't play the same position. Either way, still three major names on the card is a nice thing.


Red 1/1 Foil Stamp means that there is at least one card in the product.

And since I busted the box at the Expo, I got a bonus hit. 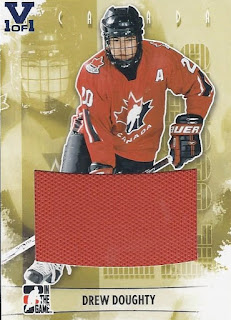 How very patriotic. I really like when Team Canada cards have nice bright red swatches on them.


Blue 1/1 Foil Stamp means that there are at least two cards in the product.

And there you have it. Only a couple duds in the group, and since two of them are prospect types who have really just started in the AHL, that's a nice ratio.

And at least I landed more keepers than I'd likely get from the Showcase box.
Posted by buckstorecards at 07:39