It is time to take a break and bust my way through another one of those 16 pack repacks from Walmart. These actually worked out pretty well, as I landed two hits in the packs and some nice PC cards. Here are the 16 packs within the box:

9 different years worth of product should make for a fun break. As I did the first time, I'm putting the packs in chronological order, and selecting which packs through random.org picking the numbers.

And this time, random.org selected: 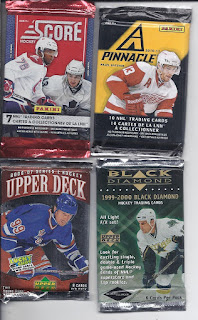 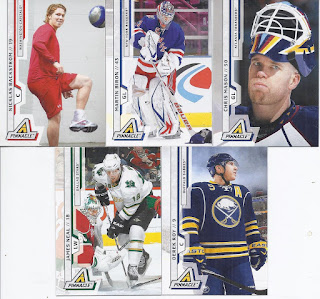 Pinnacle really was that in terms of interesting photographs. I really like that new Derek Roy for my Rangers alum collection, complete with the smoky background. A pair of mask cards are there as well, although Mason is a dupe. James Neal has a nice look at a scramble by the net on his card, but the big vertical winner for a base card was Backstrom playing with a soccer ball before a game. 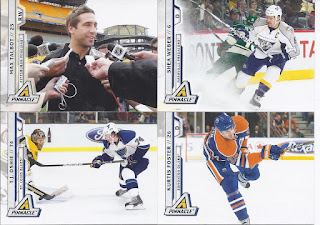 The horizontal ones weren't as nice, but I do like the outdoor game preview shot on the Talbot, as there really can't be enough cards with photos from the outdoor games. And someone out there will appreciate a new Oshie.

But the big winner in the pack was this: 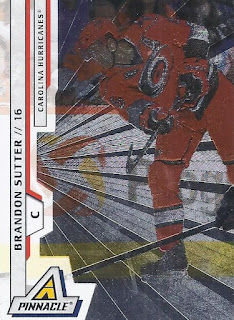 A shiny Rink Collection parallel of 2/14 baby Brandon Sutter! WOO-HOO! There is nothing better than pulling something for a PC from a pack, especially when it is a nice parallel or insert. 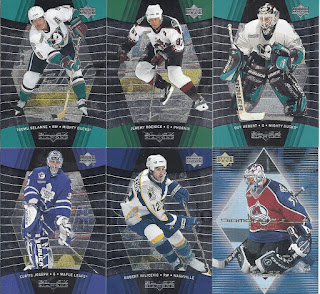 A trio of cards for the mask binder highlight the pack of Black Diamond. The Diamond Skills insert falls at a rate of 1:24 packs, so at least I landed a one-per-box card. 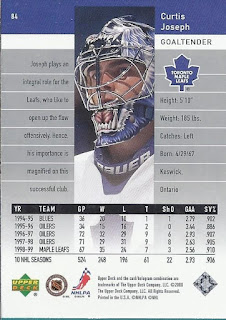 The Cujo might go into the binder backwards, though, since the photo on the back is far better for the collection's purpose. 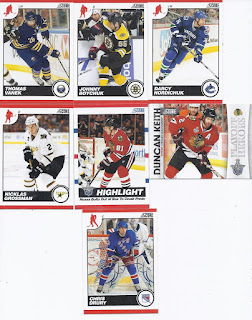 The 2010 Score pack wasn't the most exciting, but I do like the Boychuk photo. And there's a nice insert card for my next package to 2*3 Heroes. The Drury was the glossy parallel in the pack. 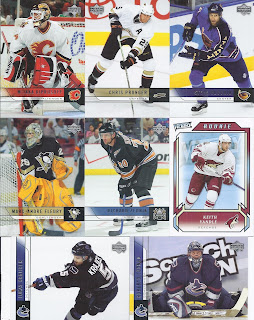 Finally, 2006 UD. While I didn't get a Young Guns card, I did land an of a rookie who is still active in the NHL. That's always a positive. As is three more mask cards. While there were no spectacular photos in this group, the Luongo is still a nice one.

4 more packs next time!
Posted by buckstorecards at 09:01