I'm starting to reach the end of the Expo singles I've picked up. The only ones left that I can group together are the Senators cards, so I'll show them off today. 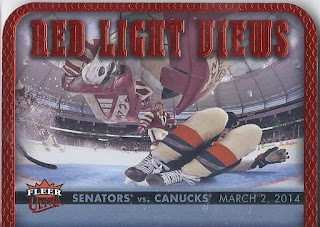 I didn't know that this insert series existed until I grabbed one from a quarter bin several months back. Learning that the Senators had an insert in there had this one on my "Top 20 cards to find at the Expo" list.  Some were general like "Norman Powell hit", and some were specific, but I was happy with my .750 hit rate from the Expo. Back to the card, I like that it is an interesting photo beyond the generic "goalie's back" photo, and that it shows a different view of a building I'd been in several times for Grey Cups. 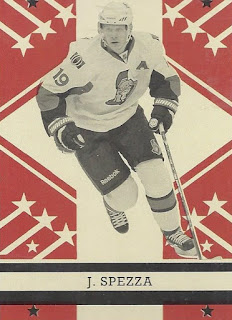 Spezza might not be a Senator anymore, but that doesn't mean I still can't enjoy adding this nice retro card of his into his PC. 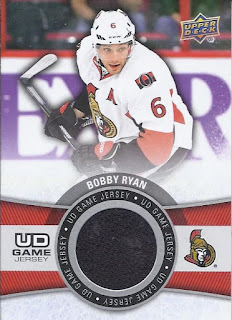 These particular inserts from Series 1 have fallen to incredibly cheap levels (as with pretty much anything from S1 that doesn't feature Connor McDavid), making it an easy decision to add this Bobby Ryan to my collection. I could even complete the relic rainbow by adding the red and white versions for a little more than a dollar each at COMC. I won't though. Yet. 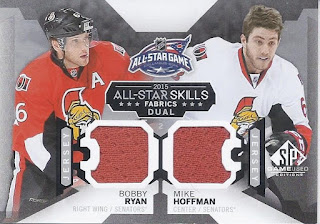 More Bobby Ryan here as I add by first Mike Hoffman hit to my collection. Hoffman was a 5th round draft pick that toiled in the minors for a bit, only earning a few Panini rookie cards, and no hits until relics started showing up this season. His only Upper Deck card prior to 2015 was a base card in their AHL set. Mike is also a Kitchener Rangers alum, having spent 6 games there before being cut and making his name in the QMJHL. His cards still count in that collection as well. 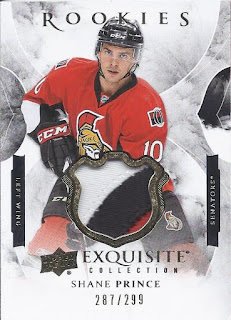 And the final of the hits is a patch from this year's Exquisite (which was a one card box-topper in Black Diamond). Shane's no longer with the team, having been traded to the Islanders at the deadline this year. But, this can also be a Rangers alumni hit, since he spent time here as well.
Posted by buckstorecards at 07:39