I've been planning this since at least the late summer. Maybe now it is finally time to get down to doing this. The only qualifications to make this list are:

1) The card is currently in my possession.
2) The featured player(s) on the card are in an Ottawa uniform or listed as an Ottawa Senator
3) Cut-off set is this year's Upper Deck flagship release

That's it. As can be expected with some of my other personal collections, Daniel Alfredsson and mask card will be all over this list.

And away we go. 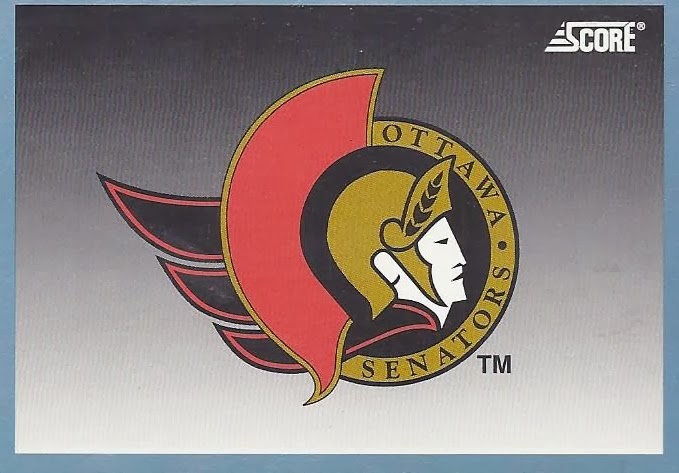 The Sens made a couple early appearances on cardboard that predated their on-ice re-debut. O-Pee-Chee featured a mock-up of the Senators jersey in their 1991 release. There were some "now with" cards in 1992, as well as posed shots of the expansion drafted players. Nice, but I'm only going to have too manye staged shots in my top 50. This one is a simple logo, but on the back: 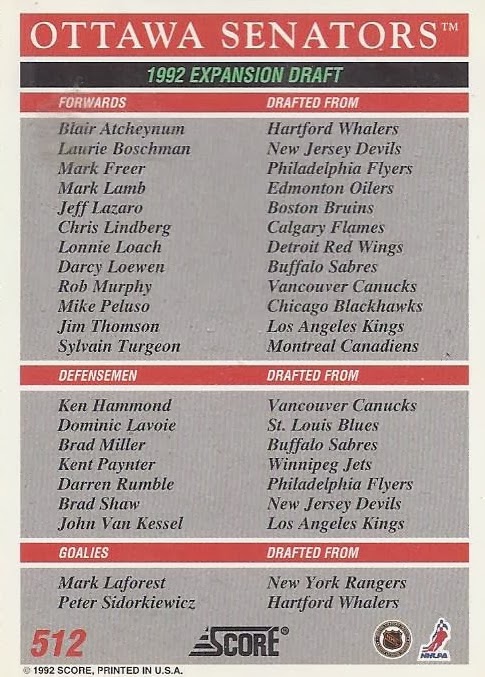 A list of their expansion draft picks. It's a rogue's gallery, for sure. John Van Kessel? Kent Paynter? Ouch. There's a reason they won one road game that season. 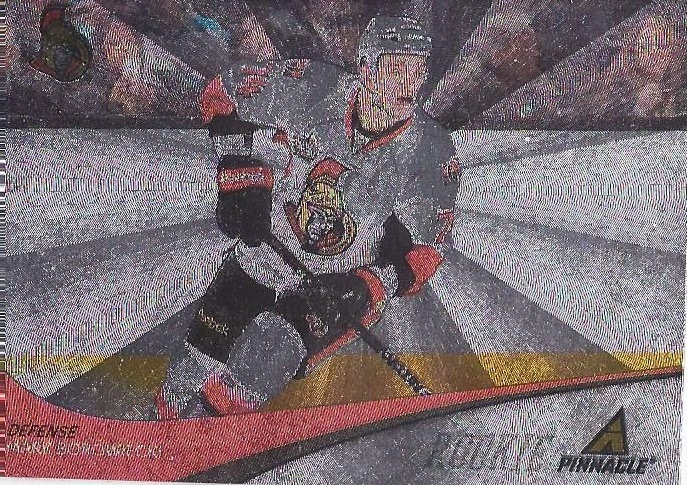 I love shiny cards. There are going to be a few of them in this portion of my top 50. This one is a lot more legible in person that in this scan. In fact, the name is even legible from any angle in hand. He's still in the system, always a bonus. In fact, this one might have been higher if it scanned better. 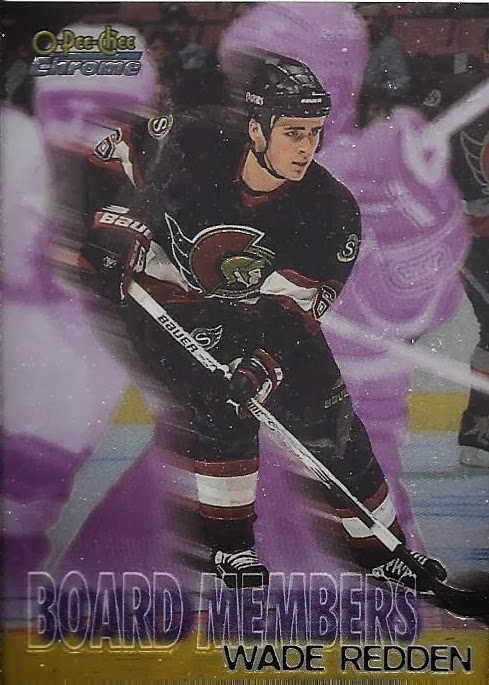 It's another shiny card, this one from a subset that saluted some of the better defensemen in the league at the time. The background of someone being rocked along the boards is spectacular. If only Ottawa had elected to shell out the big bucks to keep Zdeno Chara as opposed to Wade. 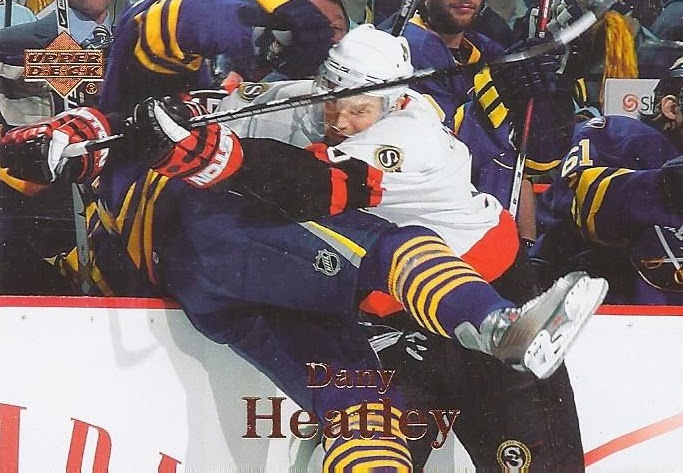 This is among my favourite photographs in my Senators collection. There's probably about 15 or so that will be in this list solely for the picture chosen. This one should be higher, but considering the circumstances that lead to Dany's trade from here, it's going to be lower than it should be. 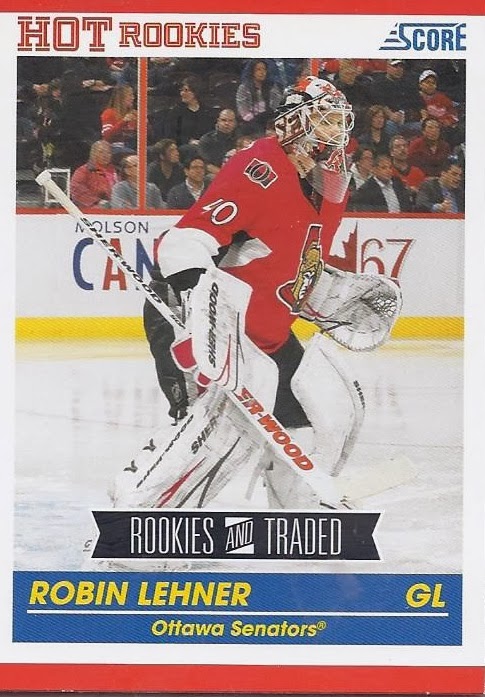 The first one to make it into my top 50 based solely on the mask. You can see the one-time alternate Sens jersey patch on the side of the mask. The back also gives the factoid that Robin was the youngest ever starting netminder for the Senators. 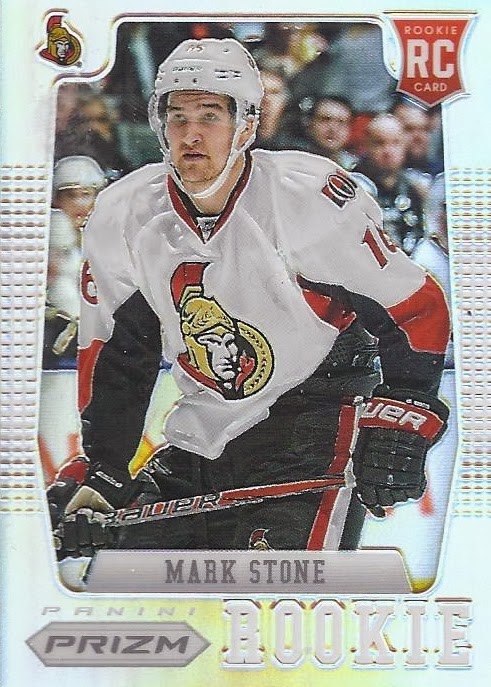 I promise. This is the last one in my top 50 solely for shininess reasons. 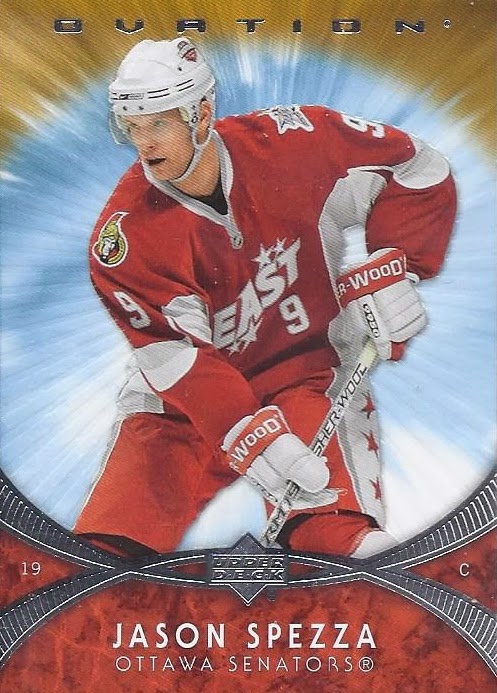 This is one of my odder choices for the list, but it is the uniqueness of it that made me add it. It is here because it is the only one where the player isn't pictured wearing an Ottawa Senators jersey. He's wearing an all-star jersey here, but the Senators logo still makes an appearance on the shoulder patch. All-Star jerseys have been making appearances in base cards for UD's Artifacts set over the past few years. Still retaining the Senators colours for the background is another bonus. 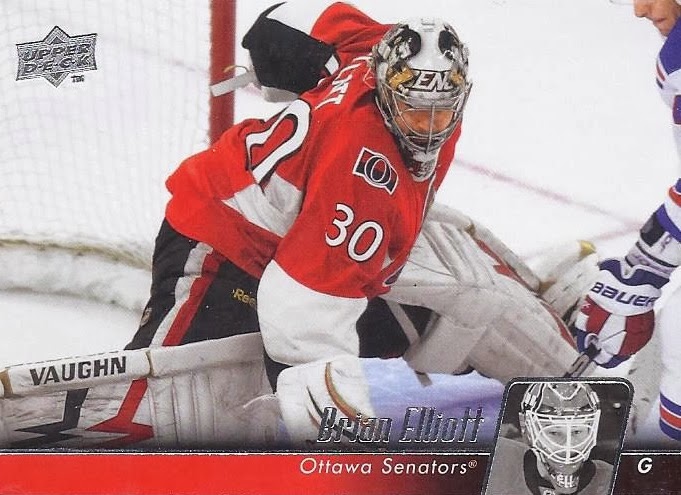 A classic photo of a save, combined with of Brian's many Casey Jones appearances. What's not to like? 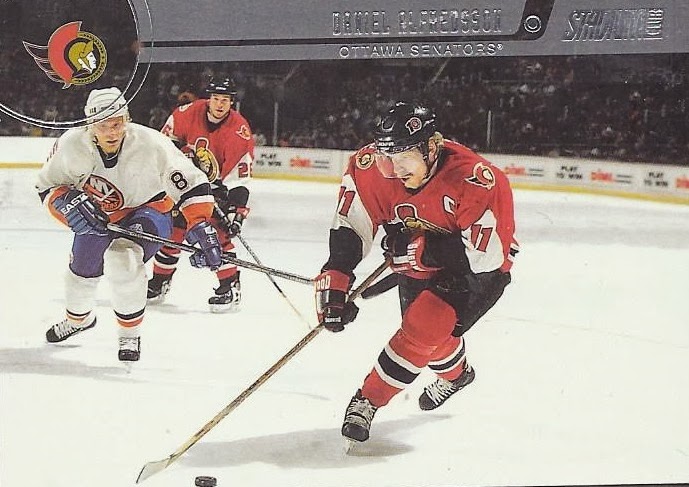 It took all the way to #42 for Alfie to make an appearance? There's lots more of Daniel to come as I work my way up to the top. This one's here for the choice of the photo, which features a look at the huge ice surface behind him as he's almost up along the end boards for this shot, but is still focusing on the puck despite the cramped quarters, and an Islander zoning in on him. Full bleed on the bottom 90 percent of the card couldn't have worked out better. This card is also thick, and is part of a decoy card subset. Hey, it's a better idea than just a plain cardboard dummy. 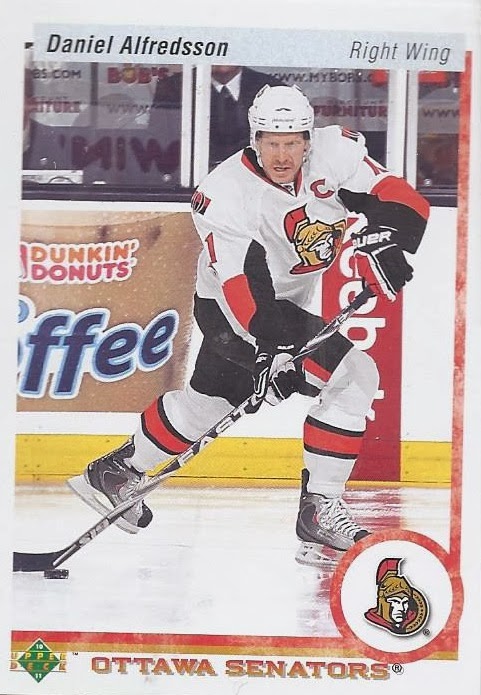 And to wrap up the lower 20 percent of the to 50, here's a retro-ish card. I really like that "what if" ness of this. Since the Senators weren't around for the original release of this set, this gives me the chance to see what a base card would look like. This might actually have been higher, if not for the paper thin card stock used on the card.

10 down. 40 to go. It was pretty easy working out which card would be in my top 50. TRying to place them in order is a lot tougher.
Posted by buckstorecards at 09:42