And now, the repack's top half.

I've pulled a bunch of those white bordered rookies from these repacks - might as well add in some orange. This is the first time I've seen anything from last year's products show up in one of these, and it is interesting that they all came from the same team. The only reason I even remember Iuzzolino is because of NBA Jam.

The Harper and Williams both come from some McDonald's set. Were these used stateside while we got hockey up here? I thought the Donyell Marshall was an insert card until I got a good look at it. It's a base card, and easily my favourite photo in this half.

Tyrone? Tyrone? At least it says Blue on the back of it. My first HOFer on this side with the Wilkens. And he's a HOFer * 2, being in for both playing and coaching. The Dino/Acie combo card indicate the start of the really bad times in Boston. With the blonde hair, we can see the development of Rodman's perpetual 'Please pay attention to me' phase. Also, the Kings with names on the bottom of their uniforms? There's a trend I don't remember, and that's a good thing.

And we've got a 1 in 4 repack hit! The first one was a Greivis Vasquez /499. This one is /699, and I'll give this the nod in hit wars since this one features a coloured swatch as opposed to the plain white on the Vasquez. Despite one being a future Raptor. Among the rest, there's a second appearance of a HOFer with Petrovic. But, you've also got two of the ugliest uniforms featured as well with the Blaylock and Gilliam. Baby blue with a fading. What were they going for? 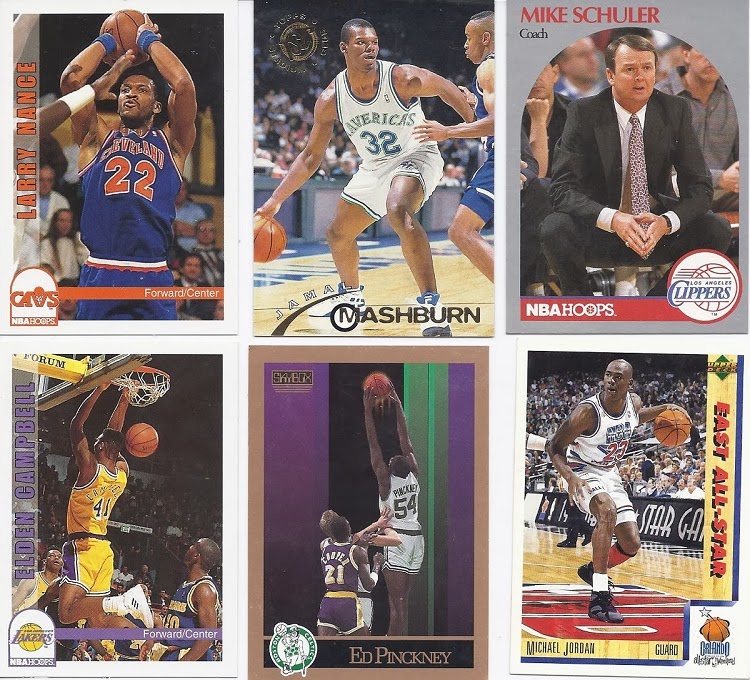 But to wrap things up with a Michael Jordan is always nice. As a bonus, it's from an Italian set. I always seem to find at least one of these per repack. It's nice to pull one of a marquee player.

Posted by buckstorecards at 14:30