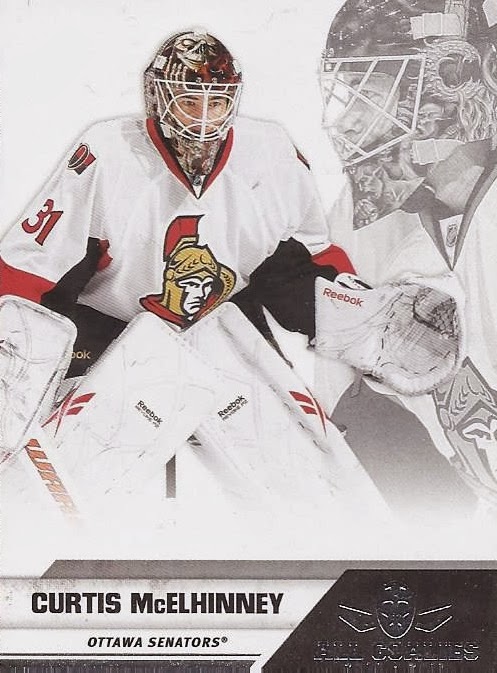 Another member of the "He played here?" club. With the bonus of a great mask that hearkens back to the standard "heavy metal album cover". 2010 was a busy year in net for the Sens, with luminaries such as Mike Brodeur also getting a shot prior to Craig Anderson's arrival. 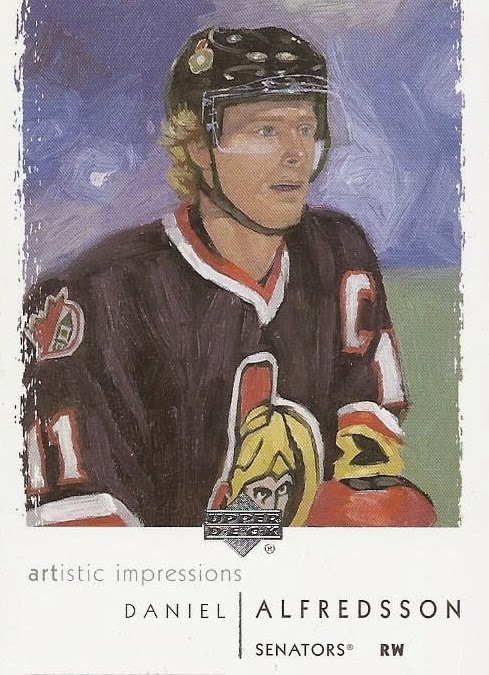 You just knew with me there would be a drawn card or two in the mix. In this case, this is the first of two. 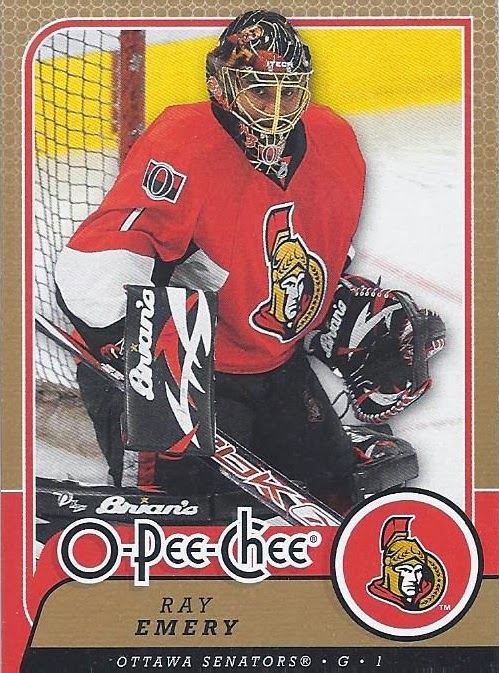 I really wanted to get one of Ray Emery's boxing themed masks in the top 50, so mid-range seemed like a good place to have it end up. I just wish there was a good one of his time with the controversial Mike Tyson mask. 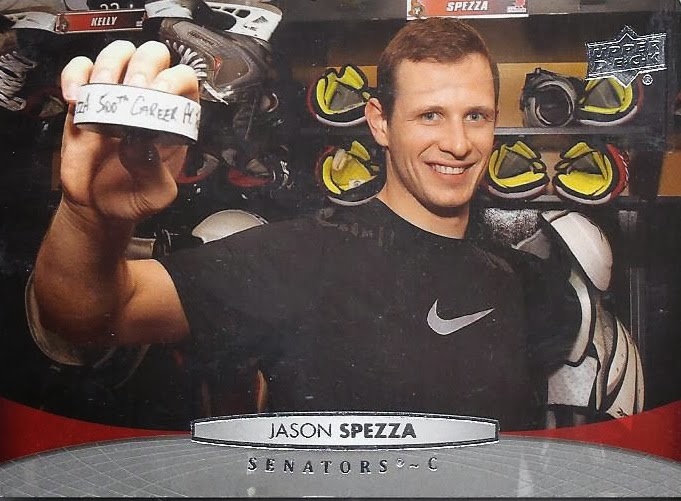 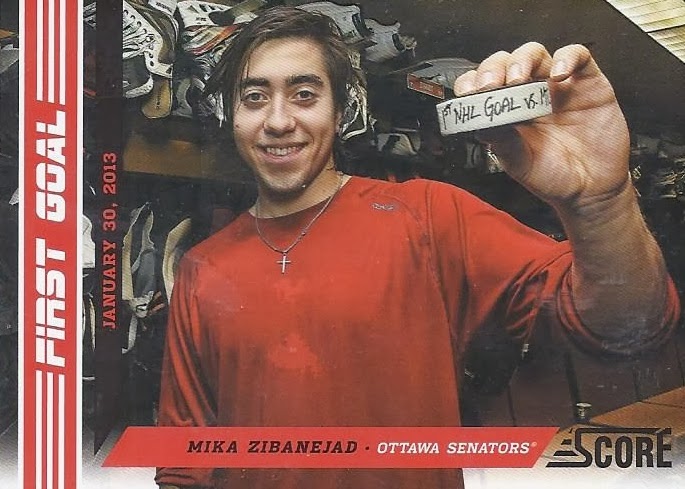 Another combo theme. This time, here are a pair of players posing with their milestone puck. 500th point is pretty impressive, but the first goal puck is more important in any players career. I give that one the nod over Spezza. 3rd appearance from the 2011 UD base set as well. There were also three more cards (Erik Karlsson, Zenon Konopka and Craig Anderson) that came close to making it as well. That's a strong base set for any team. 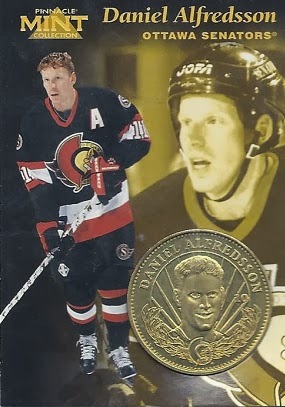 Why, yes, this is a total gimmick.  Your point? 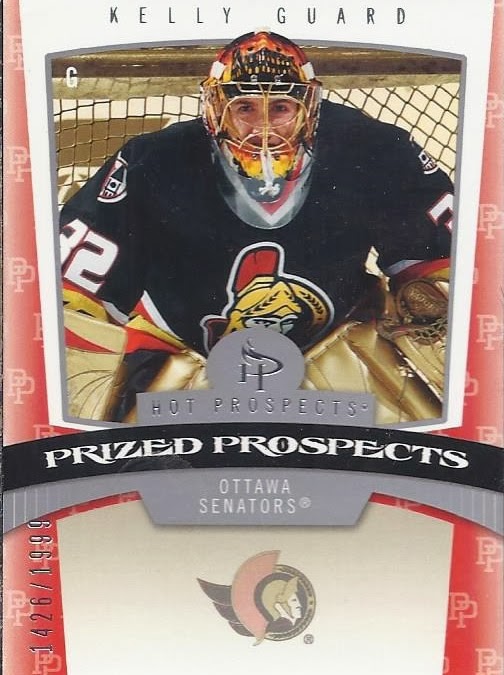 It's not the best mask photo in my collection, but it is still here for a reason. Kelly Guard, and it is based solely on the fact he was a goalie, might be my favourite name in the franchise's history. 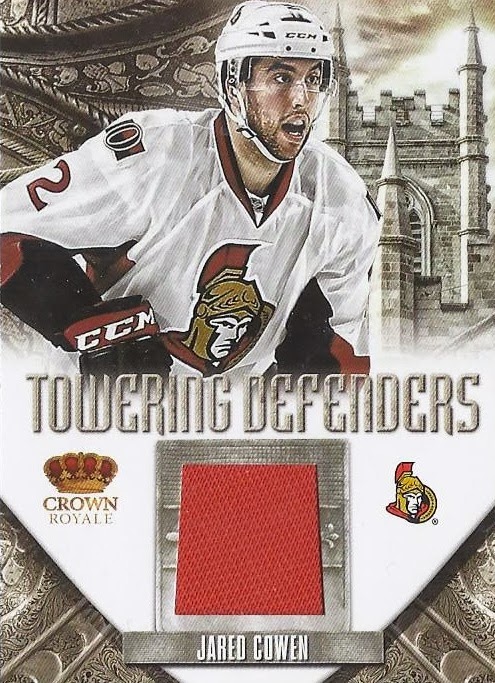 I loved the concept for this subset. A subset based solely on height. The castle gimmick would have worked even better if this had ended up in Crown Royale as opposed to Anthology. It's a nice bright red swatch as well. 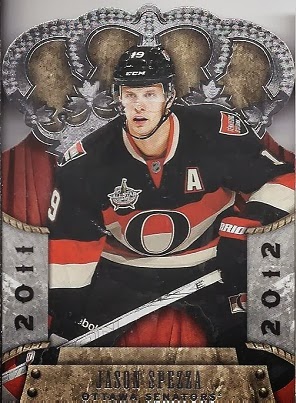 I love the current Sens Heritage/throwback/alternate jerseys. It looks great with a design that calls back to not only the original Ottawa Senators, but the continued history of the stripe with the OHL's 67's. It's a spectacular old school look, without some of the blinding quality that Montreal used with some of theirs. 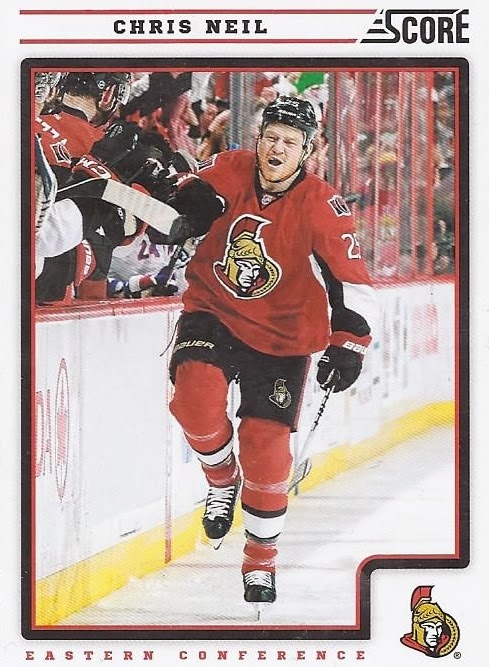 And this one wraps up with the 3rd celebration shot in my top 50. Why does this one move above the others? It's Chris Neil, team enforcer, in all his toothless glory, celebrating a goal. It's the kind of card to make you say "That's hockey. Summed up in a single, solitary photo."

60 percent of the way there!
Posted by buckstorecards at 07:47