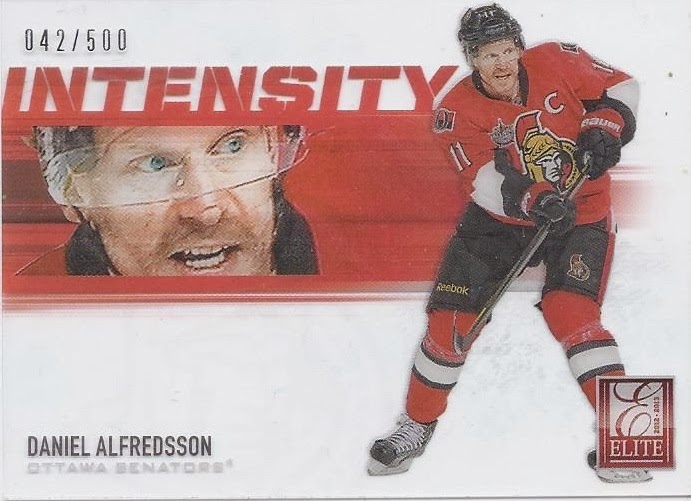 Alfie has been all over this top 50, and he's going to be all over this top 10 as well. Leading off if is this insert from Rookie Anthology/Elite last year. It can't be seen from the scan, but the majority of this card is clear/acetate. Any white spot that isn't on the uniform or Elite logo is clear. The back of the card has a write-up about Daniel's long serving captaincy. It's written behind the red bar. 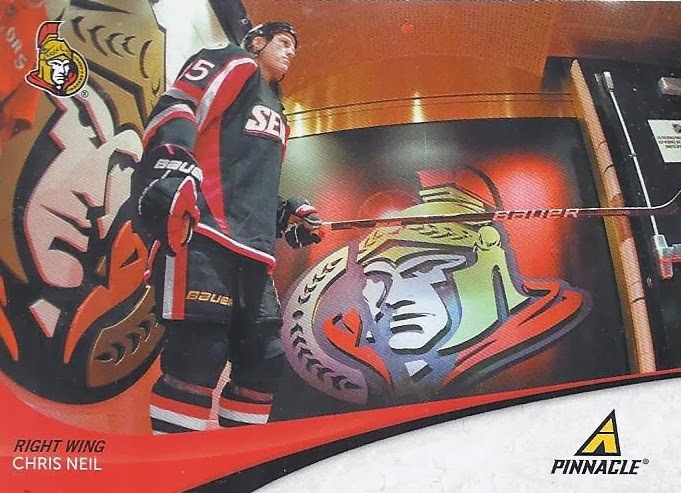 For pure photography, Pinnacle might be my favourite set in hockey. This is the third card from this particular set to make it in my top 50. It's interesting that with there being 3 Senators logos visible on this card, that none is on the player. 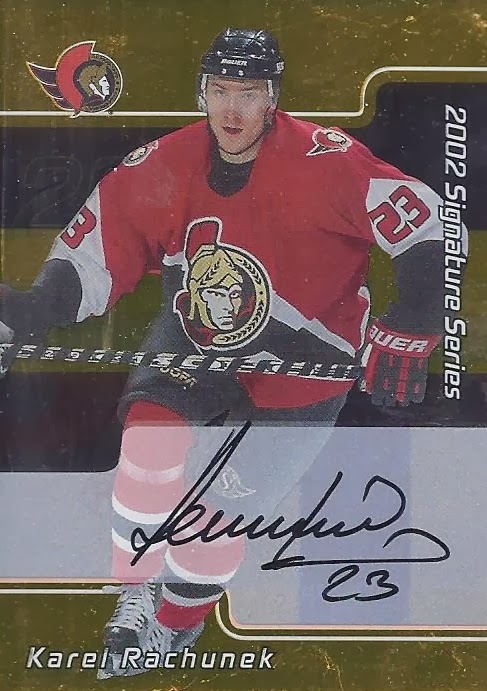 This is the most emotional cards on my top 50 list. Karel was one of the players killed in the Lokomotiv Yaroslavl plane crash. 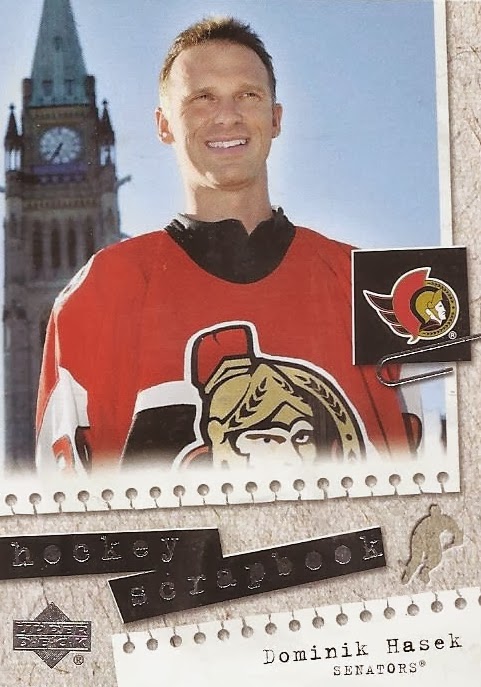 I've mentioned my love for cards that work the geography of the city into the design. Now, mostly those are done with a postcard-like background. Here, we have a photo that seems touristy: posing in from of the Peace Tower/Parliament buildings. 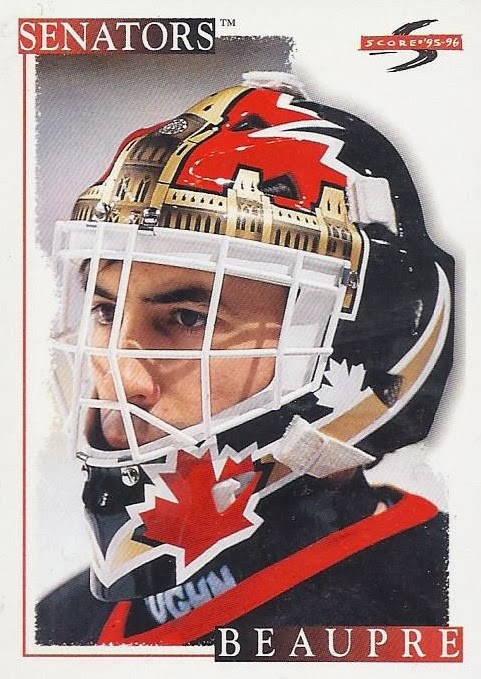 Going into this I would probably have thought that my highest ranking masks card would be Patrick Lalime's Marvin the Martian mask. That mask didn't even make any place in top 50. And #1 is the simple patriotic entry from Don Beaupre. Bright red Maple Leaves in the background of Parliament. It's a mask that really summarizes Ottawa in its design. A rare appearance on a hockey card of a fight. Well, the build to a fight at least. And it wasn't a bad one at all. 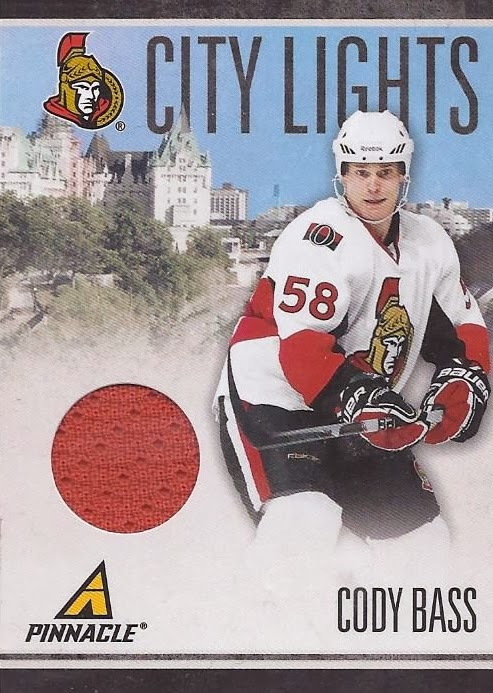 By far my most obscure player on my top 50. Cody played in just over 30 games in Ottawa. But, this one makes my list for yet another way to work the cityscape of the Capital Region into its design. This time, we get a view from one of the bridges across the Ottawa River. The back of the card includes no information about the player, but instead a fact about the city. In this case, the Rideau Canal's annual time as a skating rink. 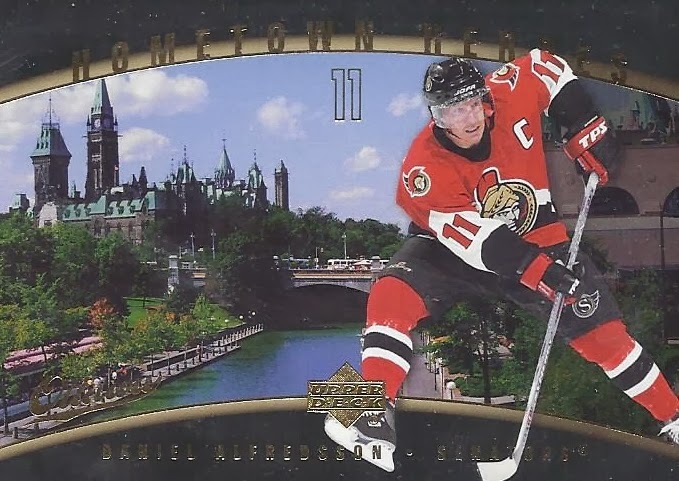 Now this is the most magnificent display of Ottawa's beauty on a card. A beautiful shot or Parliament Hill from along the Rideau Canal, with it being just a hint of early fall due to changing leaves alongside the paths. 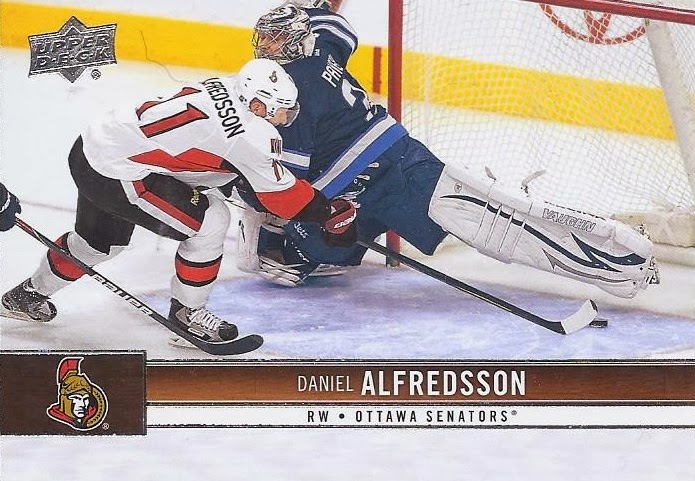 A magnificent action shot for Daniel's final Sens base card from Upper Deck. When I first came across this, I looked up the game it was from, and Daniel popped a pair of goals in that game. When a picture makes you want to do that level of research, it's awesome. While I'm sure Daniel will make more appearances in legends checklists, this was quite a final card to go out on from flagship. 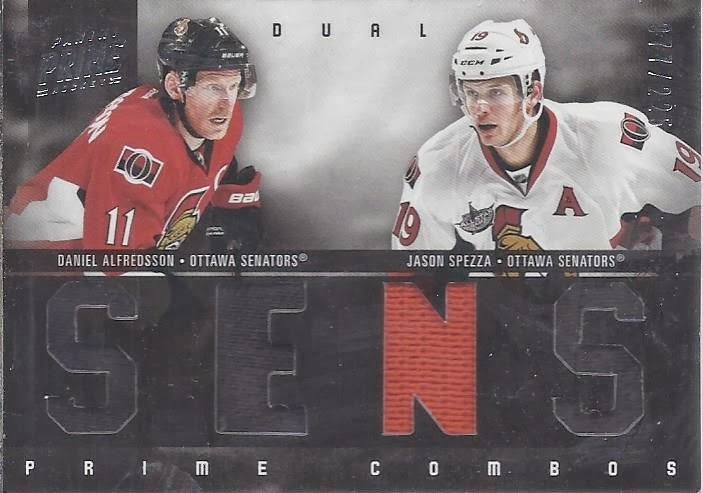 Probably the two most memorable Ottawa Senators (at least for positive reasons) together on the same relic card. Die-cut with the team nickname, and no boring plain white swatches among them. The player choice is perfect and everything about this card can be used to show off about a decade plus of team's relatively short expansion history. If I were to pick a single card in my collection to define a franchise, this one would be it.