Working my way up the top 50 with my second posting. There's themes in this post. Several of them in fact. It's a case of "I placed two of these cards in my top 50. They should probably be placed together". 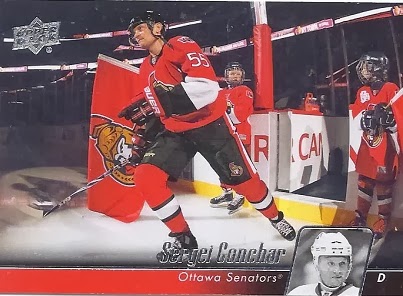 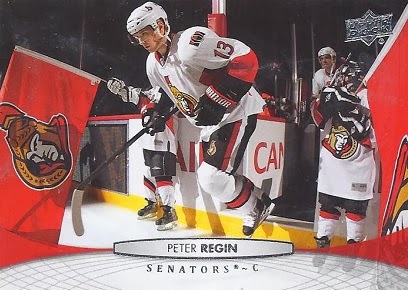 Making the entrance with children holding the team flags. It  doesn't matter the team, it makes for an incredible image for a card. The only way a pre-game ceremony photo would have been better if the player was standing for the anthem framed perfectly with Lyndon Slewidge in the background. I give the Regin card the slight nod over the Gonchar since the lower angle allows the lights around the arena not to be visible in the background. It creates a darker, old school feel for Regin's entrance. 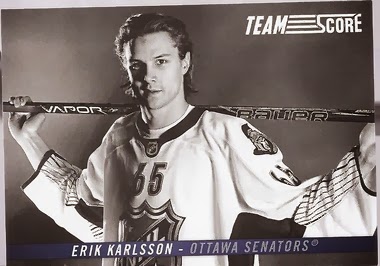 Erik Karlsson has only had a short career, relatively speaking. Still, it is disappointing that he has such a bland cardboard résumé to his name. Lots of skating. Lots of shooting and passing. But this spectacular card is the exception. I've only got a couple posed photos on here, and this one had to be one of them. A great black and white subset with every pose being the same style. It's also the second appearance of a card without a Sens jersey, but the logo is still there. 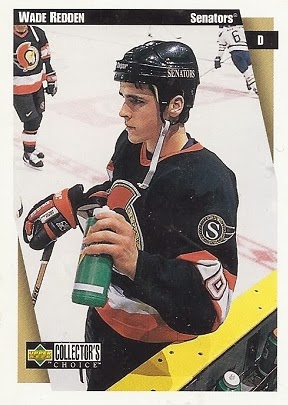 This top 50 needs a couple casual cards, so here's one of them. Collector's Choice didn't just have quirky baseball cards. They also had quirky hockey cards. 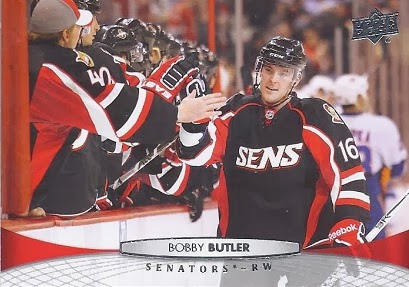 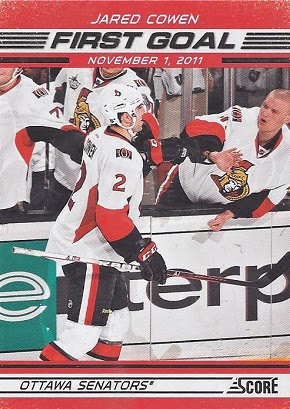 A second theme I liked was that of goal celebrations. These comprise 2/3 of the cards to make my top 50 list. And they're both cards from the same base set, or overall set of a card I posted earlier. I love the photo on the Butler one more, with the perfect view of the congratulatory post-goal line. However, since there seems to be a date associated with the second one, so I give it the nod in this battle. It was a road game, and the Senators were wearing their road whites, so it's likely legit. 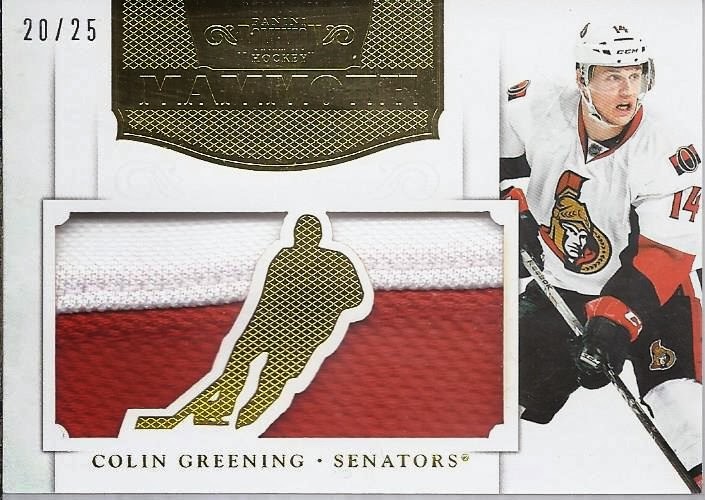 My first relic card in this list. There's more to come. It's not here for the design, but the fact that this is a nice, large, two-colour swatch, with a significant seam. 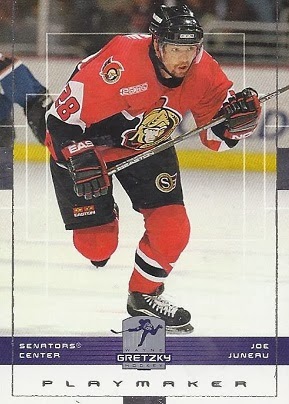 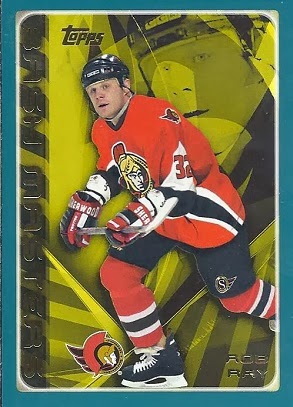 One of my favourite things about attempting to acquire at least one card of each player that suited up for the Senators was the "Oh yeah. He was a Senator for a bit" moments. Pavol Demitra. Mike Comrie. Mike Commodore. Matt Cullen. At least those guys I remembered. I'd completely blanked on Juneau and Ray's time in Ottawa. It's especially nice to add a card of a player for whom there weren't a lot of cards from their time here. Mike Commodore only has hits. Cullen's only card had him pictured with Ottawa, but listed as with the Wild. I give the nod to Ray, since there were fewer cards of his in Sens colours. 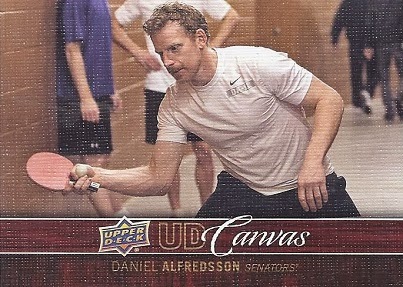 It's Alfie playing ping-pong before a game. What more do you need?

That's 20 of them. Less themes next time. More Alfie!
Posted by buckstorecards at 08:08