I took advantage of the $1 per 1000 point opportunity to add a few cards that were kinda out of my price range. In fact, when I combined my recent data entry mania, combined it with daily bonuses, I added the single most expensive card I have ever bought to my collection.

Yes. Earlier today, I moved a card that sold for $69.99 off of my watch list and into my cart, and then into my inventory.  All paid for with not a single cent out of my account - all via COMC credit. It really has the chance to be a centerpiece of not one, but two of my PCs. But I think this one might just stay out of the binders.

Who knew there would be a benefit to my temp calls being a little slow throughout the past month or so? And the scads of data entry I have done over the past while?

But, prior to the purchase of that card earlier today, my second most expensive single card purchase was done, also with COMC credit. 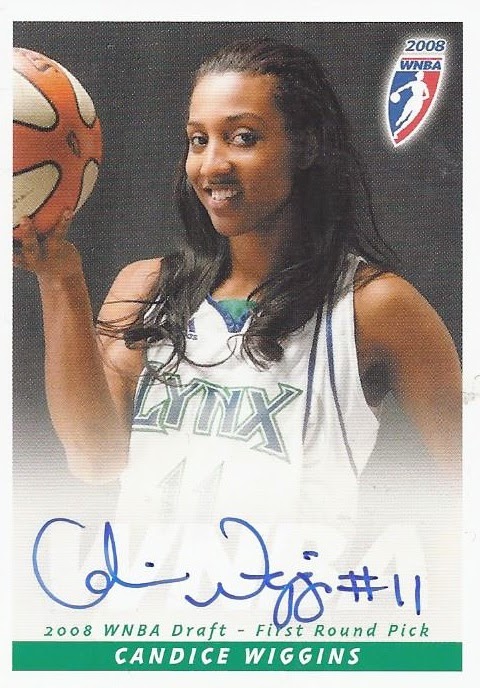 I did mention that WNBA stuff seemed to go for way more than you'd think.  This one came in at $23.75, and will likely be the most expensive card in the 2/14 binder for a long while. So, this autographed rookie card of Candice Wiggins (daughter of an ex-MLBer, the late Alan Wiggins) was sitting there for a hefty sum. Now, there were base cards available for cheaper, but when a $25 bonus dropped into my account as a daily bonus, I figured "Why not?", and picked this one up.

This card is  my first WNBA hit, and my second hit of for a female member of the binder, joining lady wrestler Ayako Hamada.
Posted by buckstorecards at 17:20