Usually, I'm the one doing the contacting on zistle to make a trade. This time, someone contacted me. Amazingly, I actually had all but one of the requested cards available. I threw in a few more to make up for my poor organizing skills, and the trade was born.

And it was a pretty good sized one, where I added a lot to my various PCs. 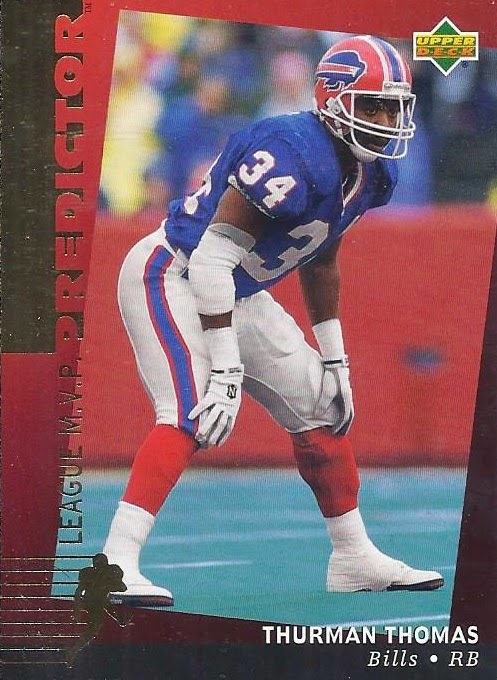 But, my beloved Bills only for one card. It being this Predictor card of Thurman Thomas, complete with pring so fine on the back I'd screw my eyesight up even worse than it already is trying to read it. But, this leads into hockey most of the way home. 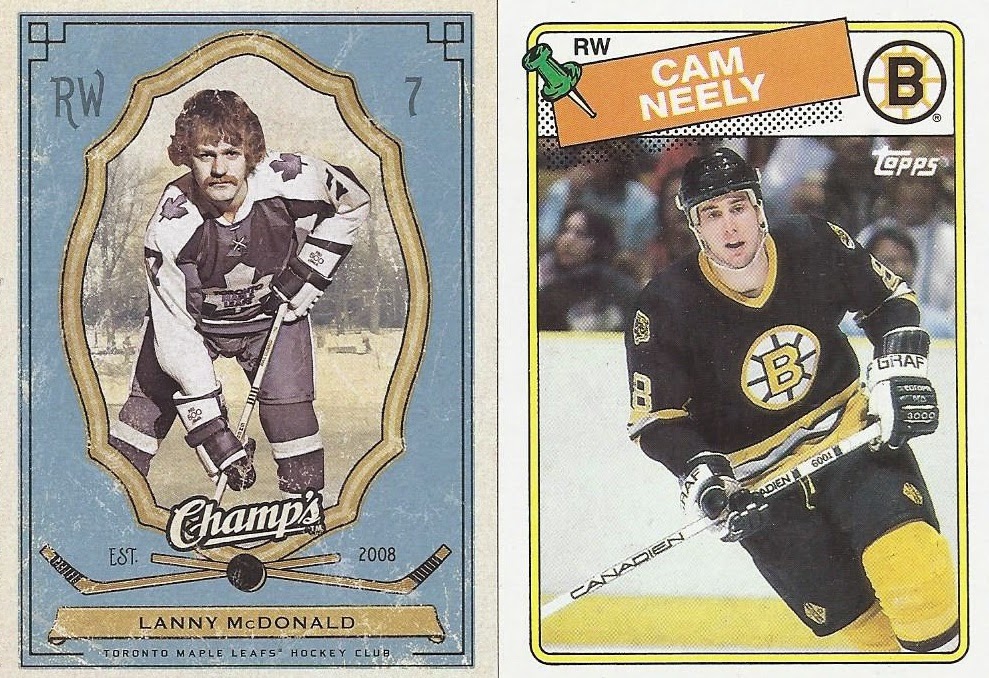 Up next, a pair of cards for my various PCs, and hitting two of my favourite designs. I've professed my love for Champ's before and its hockey salute to Ginter. I'm not sure I've done so for the push pin design, but if I haven't, I should have. 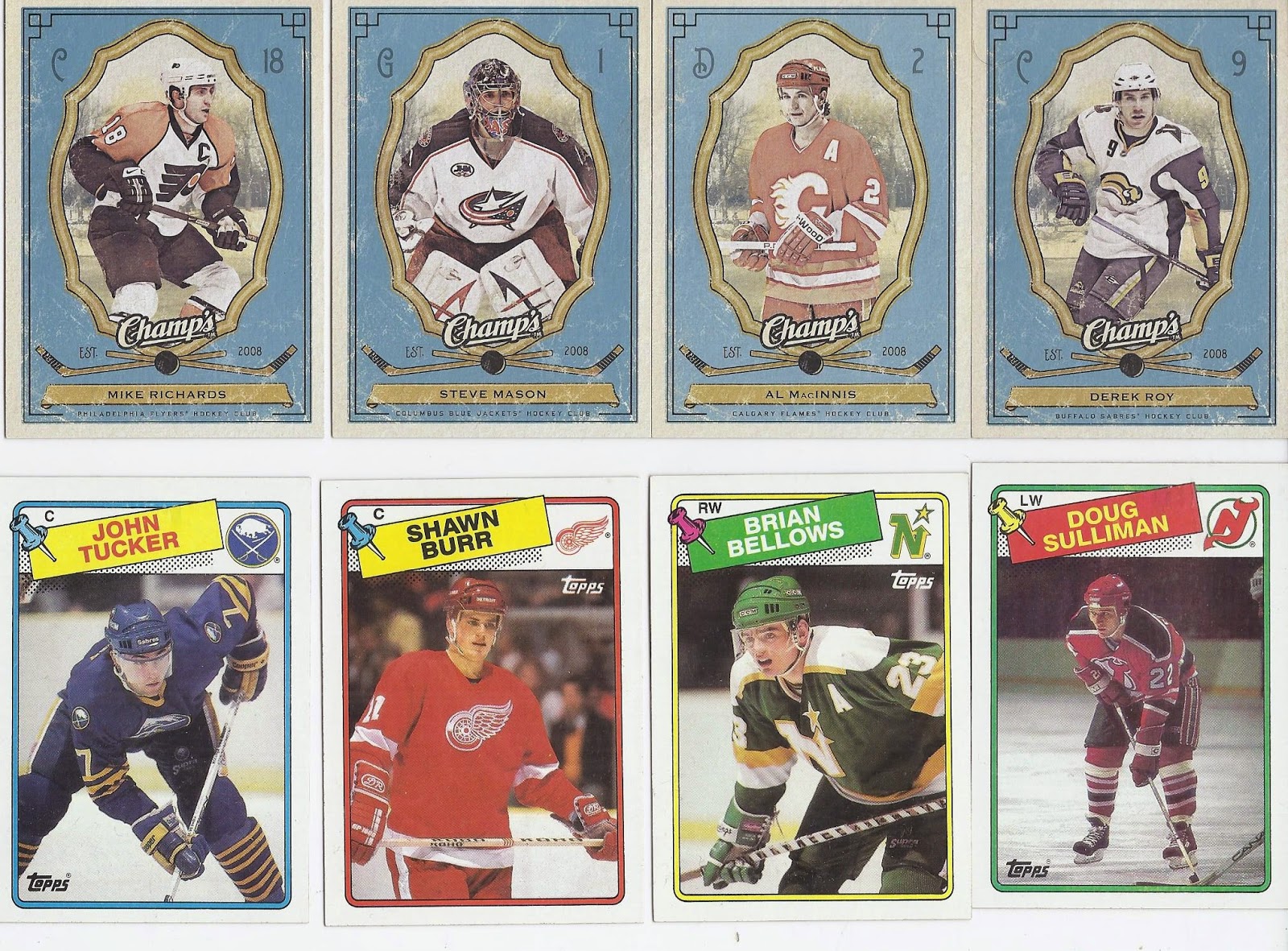 An interesting thing about this trade is that despite the package heading to Florida, OrlandoBolts was from Guelph, Ontario. That's just down the road from me in Kitchener. The Guelph Storm are probably the top rivals of the Rangers, depending on how the London Knights are doing relative to the other teams. That leads into Part 1 of the Rangers alumni in this trade, featuring more from Champ's and 1988-89. 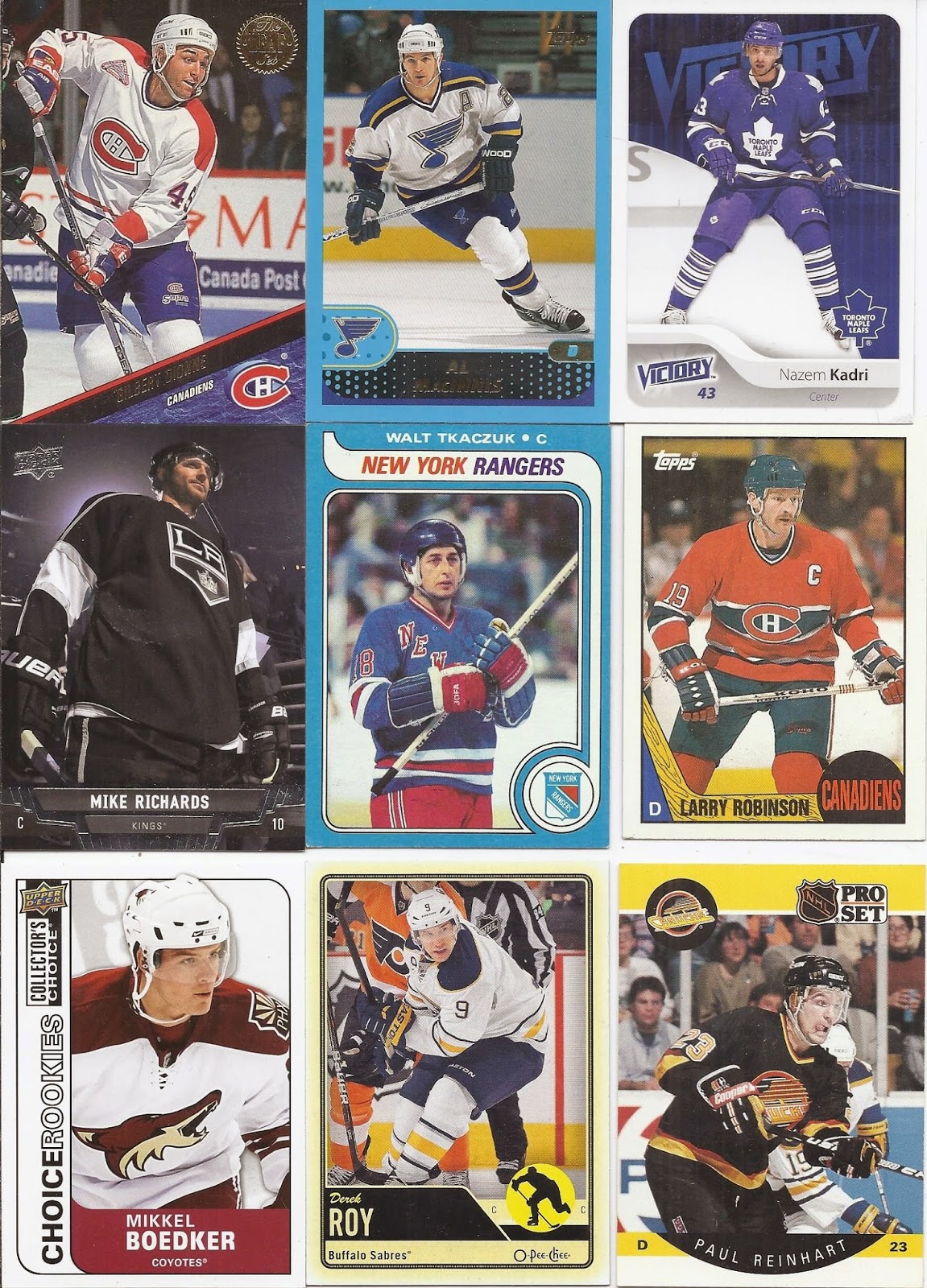 And here are some more, from a variety of sets. The big winner here is the Tkaczuk in the middle, since you really can't go wrong with anything 79-80 related. 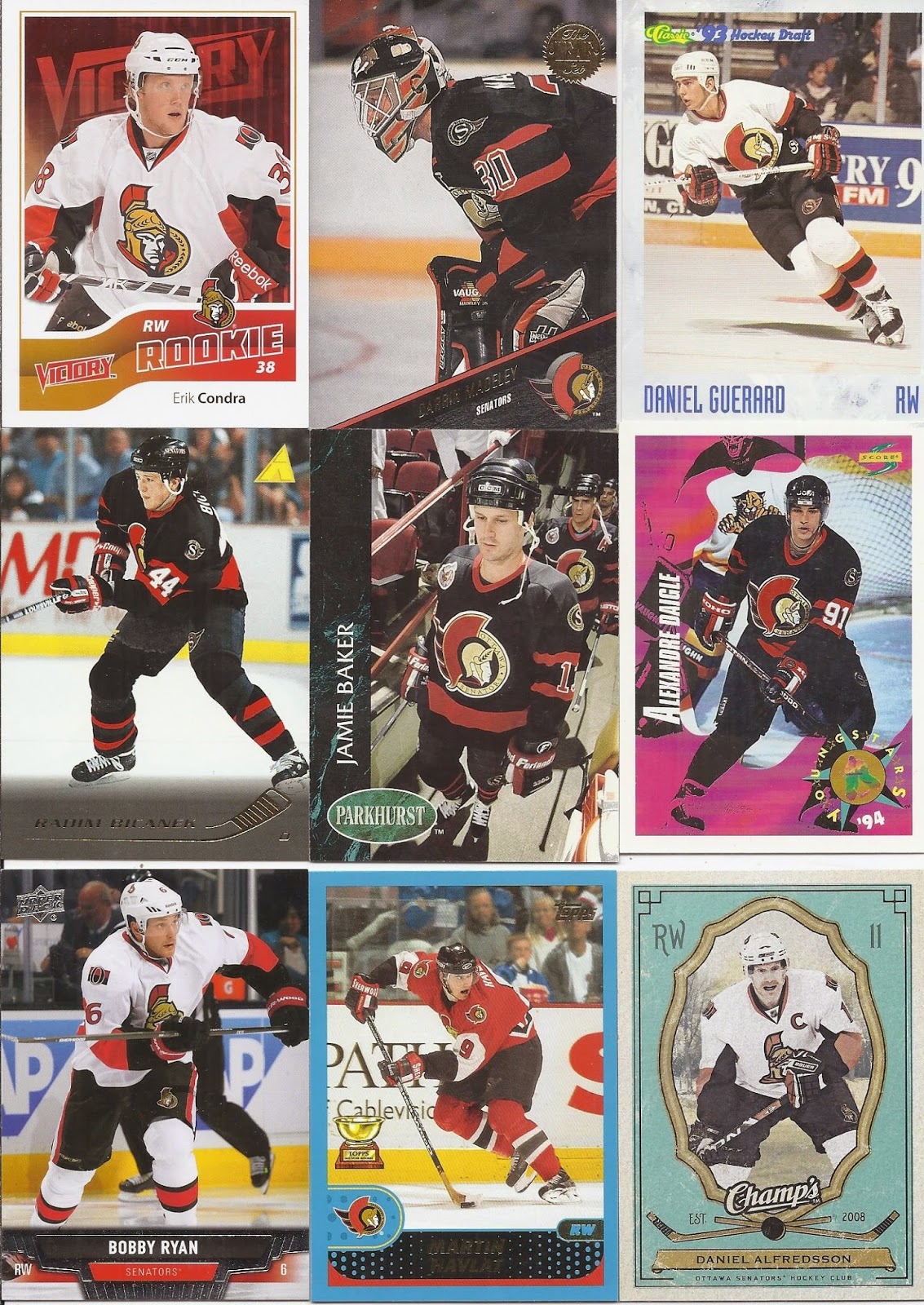 There was also a nice variety of Senators cards. A notable here is Daniel Guerard, who makes his debut in my Senators collection. I'm betting that's a PEI Senators uniform, as he only played two games in Ottawa. Still, that's good enough to add to my boxes. I like the photo choice on the Baker. Unless that's against the Islanders, he's in his road blacks on his way to yet another loss. And there's the Rookie Cup! On a hockey card! WOO-HOO! 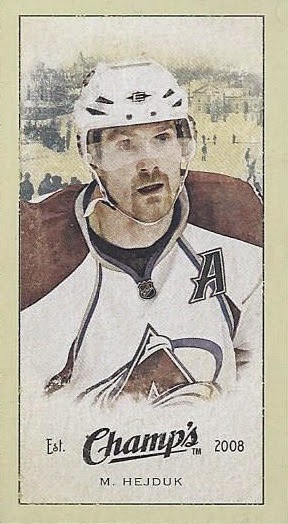 2/14 cards come in all shapes and sizes. Here's a new mini for the collection - and yet another Champ's card in the set. 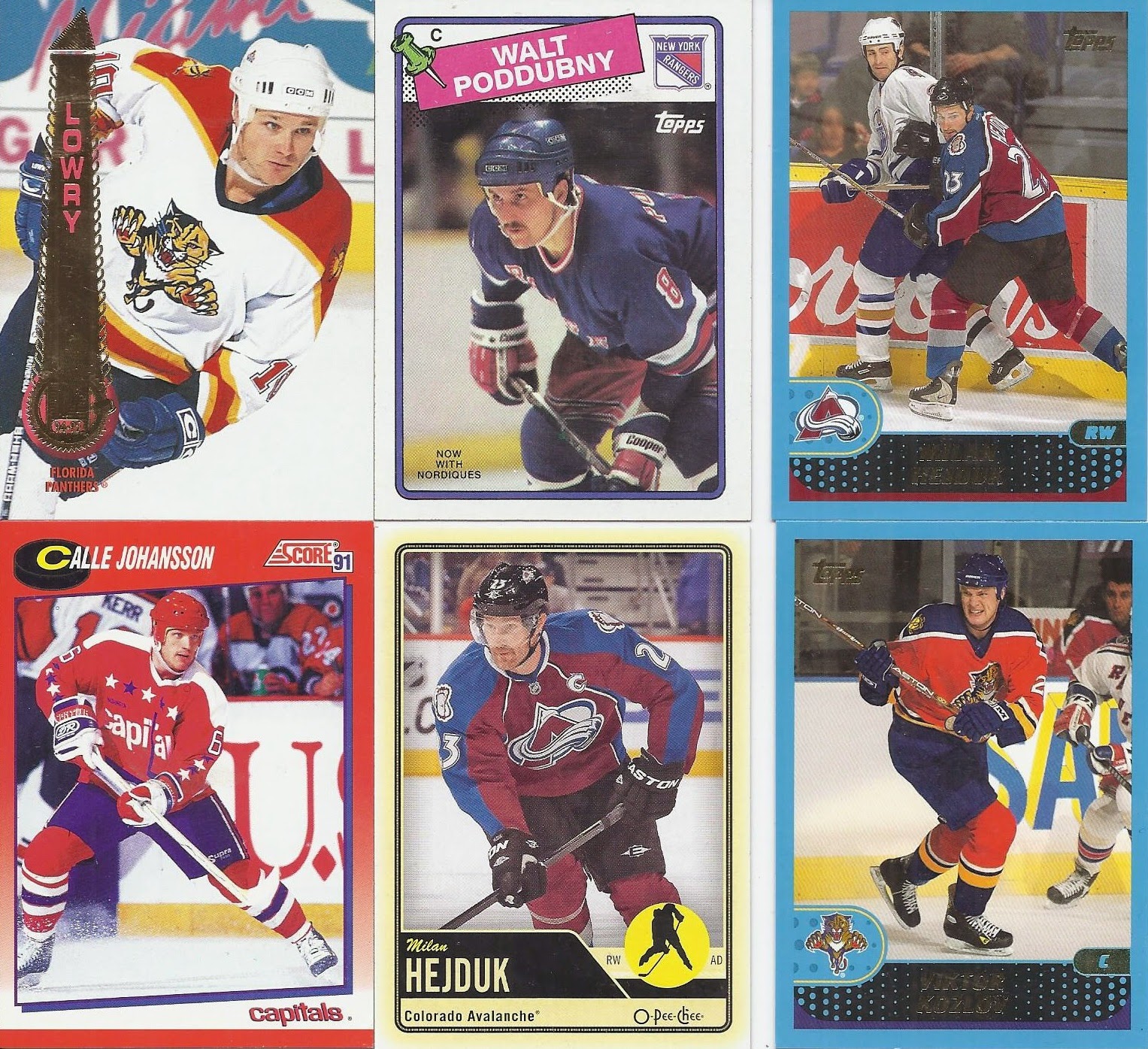 And to wrap things up, here's some more 2-14 babies. There might be a dupe or two in the whole lot, but I'm going to plow through these arrivals (and an even larger trade package) over the weekend to get things pared down. I'm thinking some of the 2001 Topps might be dupes, or merely the Topps cousins of the OPC version. These include my 81st card of Milan Hejduk, who regains over the overall lead by 1 card over Marian Gaborik.

Anyhow, thanks for the trade, and I might be sending a PWE your way sometime late this month with a Guelph Storm alumni or two inside.

Posted by buckstorecards at 12:15