Not Just Common to Me! Part 2 - Am I Not Stadium-y enough for the Stadium Club?

I hope I am stadium-y enough, since much of this bubble envelope consisted of a significant addition of card under the Stadium Club banner being moved into my misc. interesting photo binder. 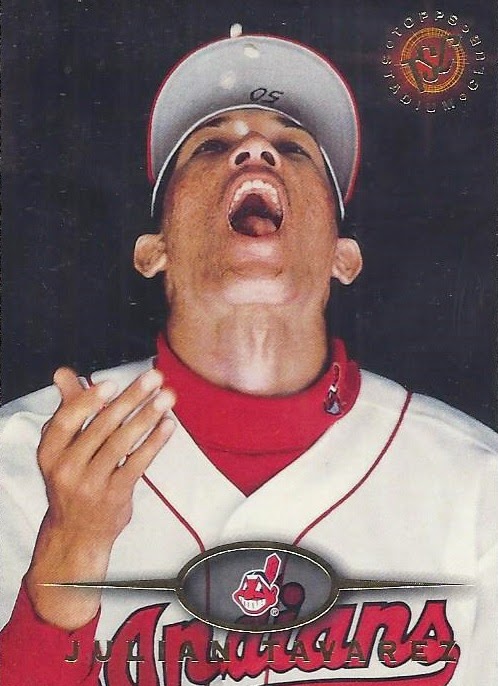 The earliest S. Club card in my envelope was this one from 1995. Just one, but is the only card in my collection featuring a player catching sunflower seeds in his mouth. At least I'm hoping that's what they are. 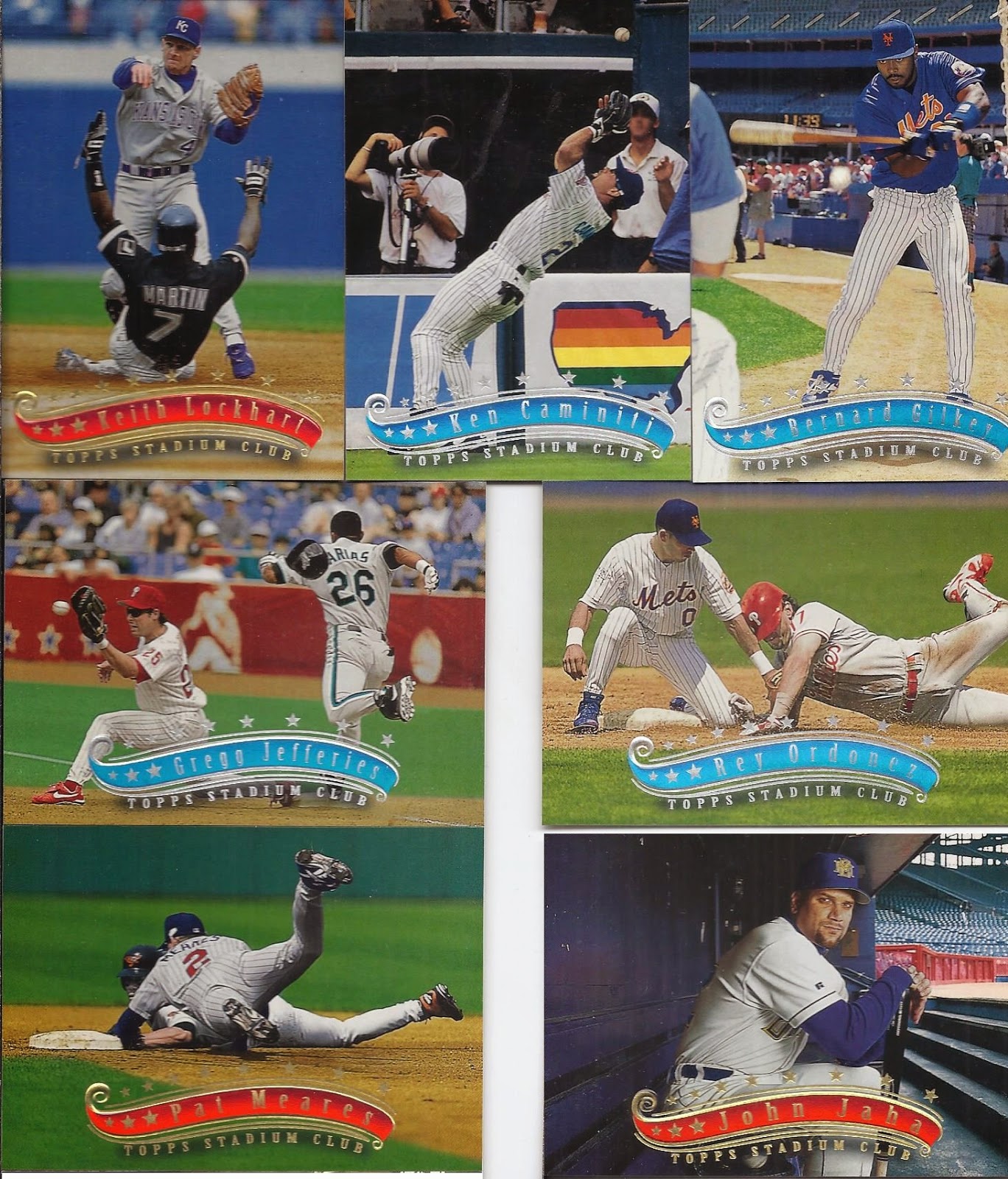 In terms of volume, the big addition was 1997 cards.  There's a couple of Mets cards in there, including a Gilkey that makes Shea Stadium a costar on the picture. The empty stadium is also the star on the Jaha. Thankfully, the photo on Keith Lockhart was snapped a split second after a moment that would have made the card much more than a double play shot to those who are juvenile. Actually, the bunt practice on the Gilkey is as offensive as these get, as the rest of these game-used are all defensive plays. 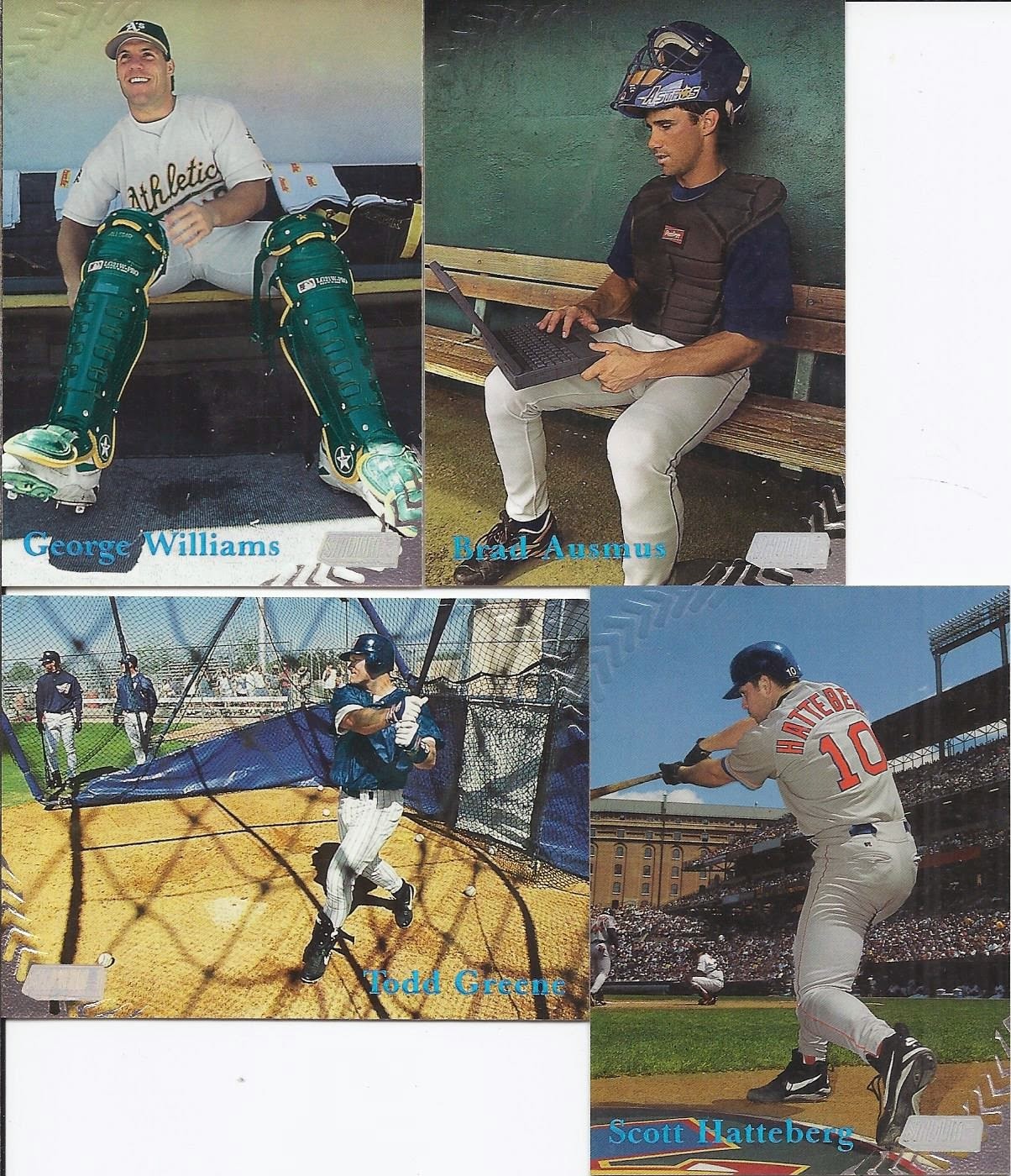 1998 cards were next, and there's at least one blog famous one there with the laptop photo. Plus, we've got a pitcher at the plate, someone donning the tools of ignorance and an appearance of the on-deck circle. But, despite the rare appearance of said circle, the stadium is once again the star of the card. 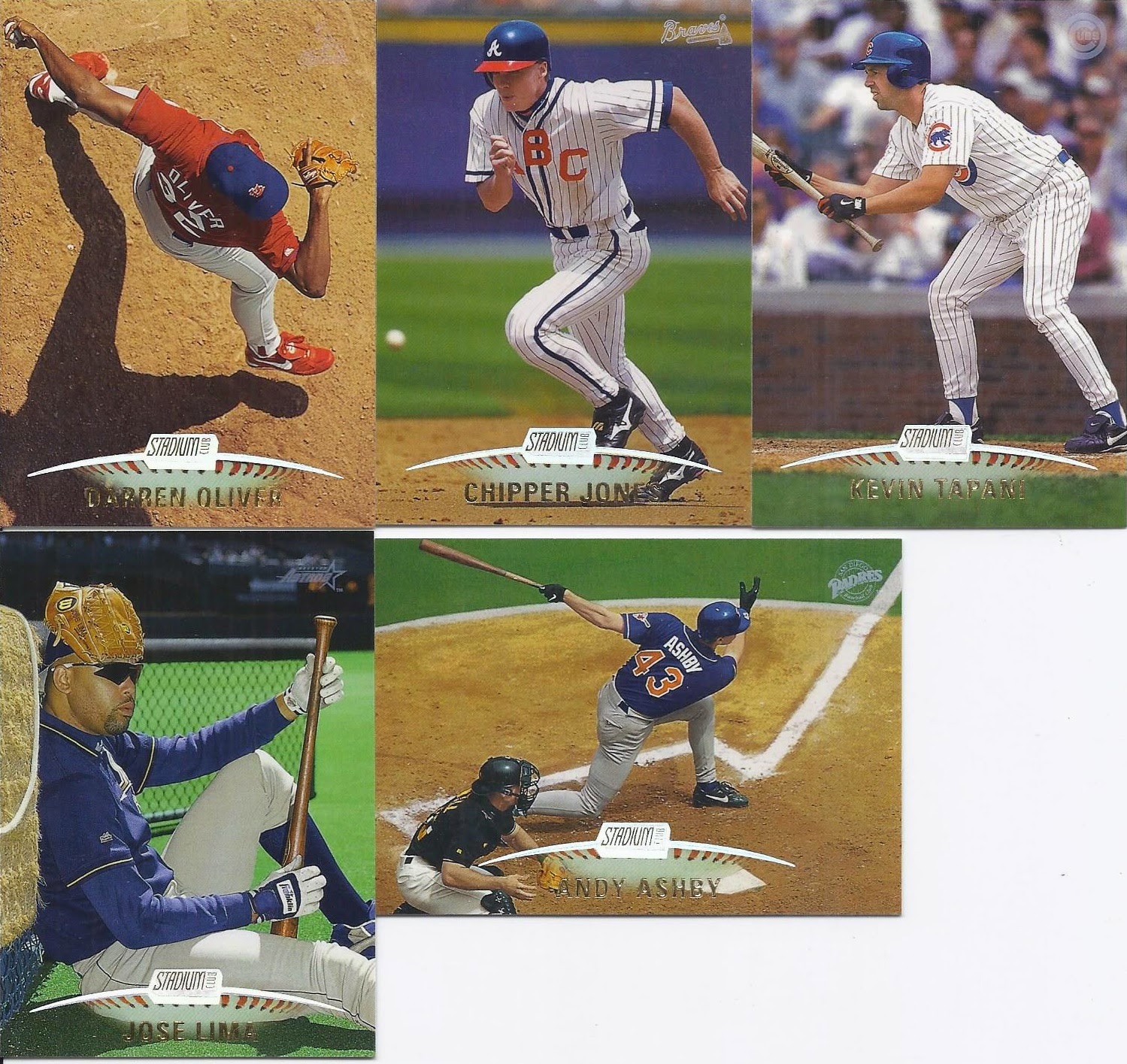 Another gorgeous overhead shot in this release as well, joining an Omar Daal with a similar photo from the same year's release. I wonder if they were snapped the same day. There's another entry in the great cardboard legacy of Jose Lima. A throwback uniform, and a pair of batting pitchers round out 1999. And that Ashby wild flail is exactly what I expect from a pitcher at bat. 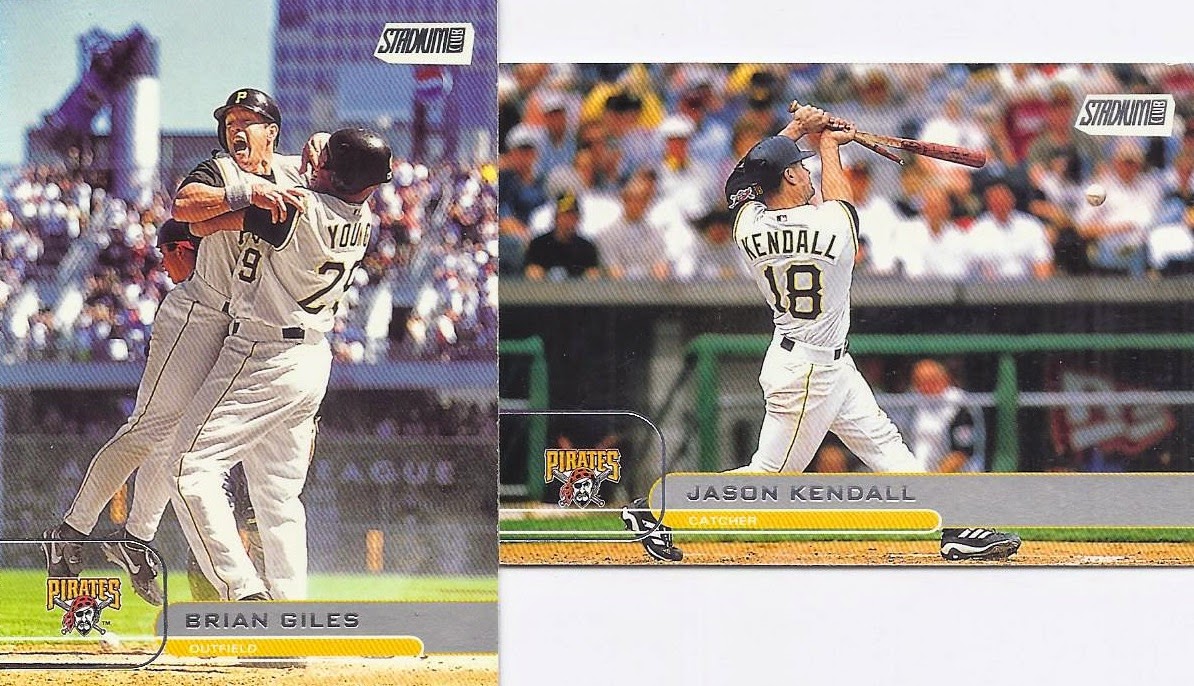 And here are a pair of Pirates cards from 2002. Looks like someone is going to get a memorable souvenir courtesy of Jason Kendall. 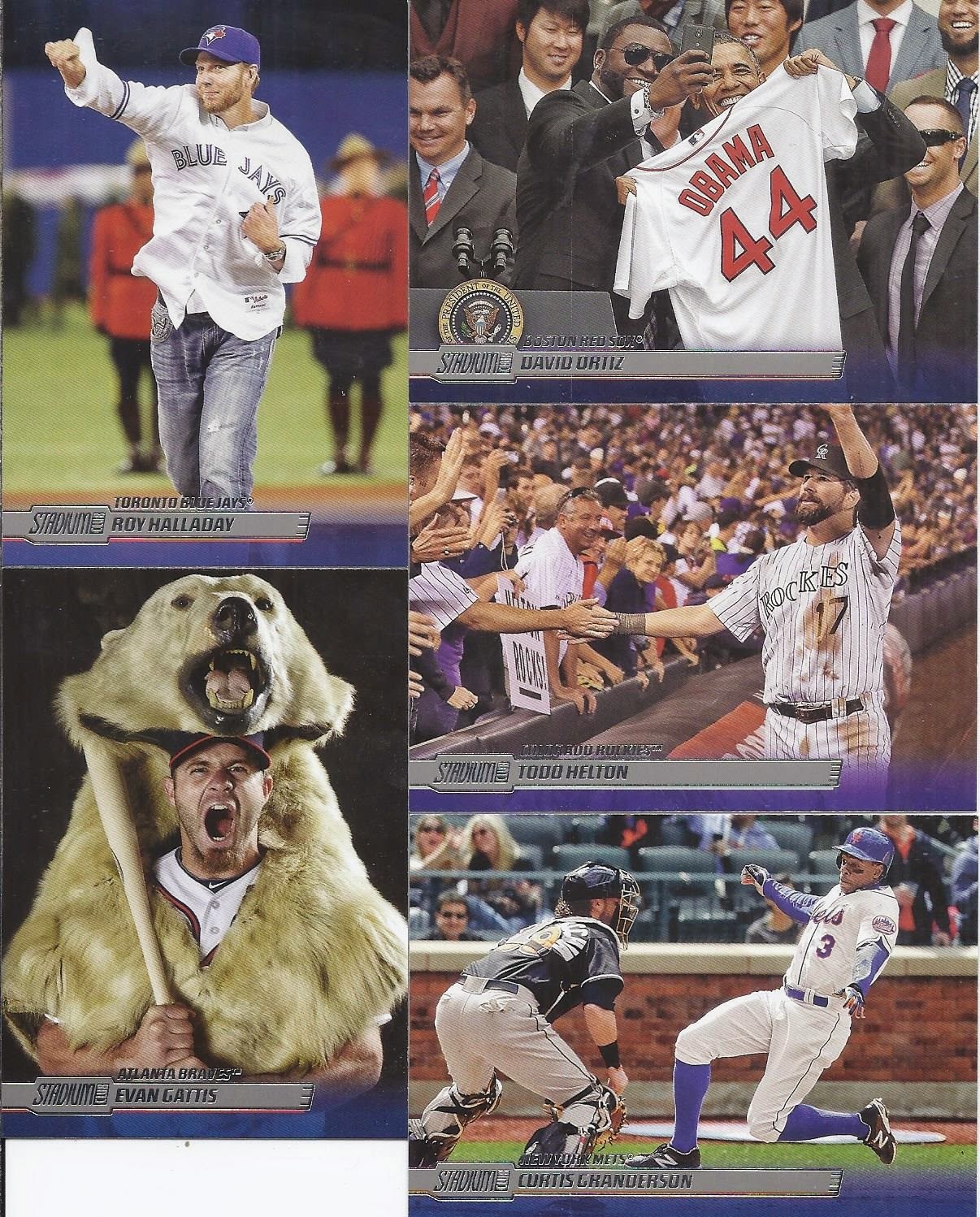 And finally, here are some of this year's Stadium Club cards. I think that might be Curtis Granderson's non-photoshopped Mets debut on cardboard. That Gattis speaks for itself as one of the stranger entries ever. The only way that the David Ortiz card could be better is if they used the actual selfie as the card. And to wrap things up with a couple cards that wrap things up, the farewells of Todd Helton and Roy Halladay. I'm not sure what game the Helton was from, but the Halladay was from where he tossed out the opening day pitch. Both are absolutely perfect choices for the last cards of a player's active career.

2 more posts to go to wrap up this envelope!
Posted by buckstorecards at 10:09