The good thing about having a couple boxes as the main purchases of the show is that it makes the recap easy. That and the decision not to post the set builder cards. 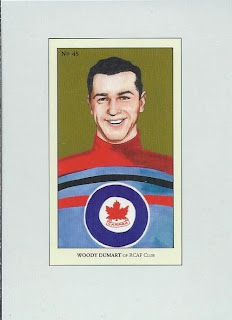 I guess this a suitable lead card for Remembrance Day. This is from 2010-11 ITG's insert set 100 Years of Collecting. It features players drawn into the way their uniforms would appear in the early days of hockey. Surprisingly, they didn't go for a Boston jersey with Kraut Liner Woody Dumart, but used the uniform of the Royal Canadian Air Force Flyers. Woody played for them before heading out to fight in WW2. A great way to work around their lack of license. 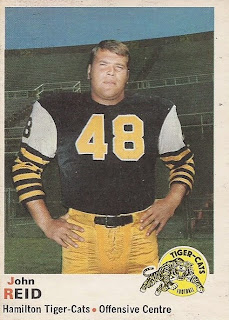 Random Canadian Football League card! Plus the greatness of a position that you never see (at least described as such) on football cards any more - Offensive Centre. 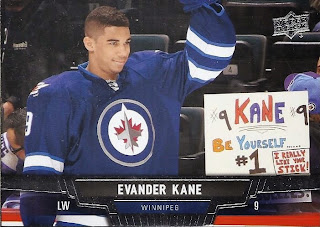 How did I not have this card from UD Series 1? If the sign were bigger, it would rival this Pinnacle card of Matthew Barnaby in terms of juxtaposition. 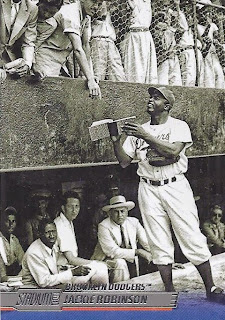 I don't know why this wasn't part of my recent run through at justcommons (I know, I'll post them soon!), but I remedied this at the Expo by adding this one. Sure, Jackie Robinson makes a lot of appearances in recent sets and insert sets, but here's one I don't recall seeing anywhere, and it brings back the concept of an autograph book, as opposed to signing a ball, card, bat, or whatever. 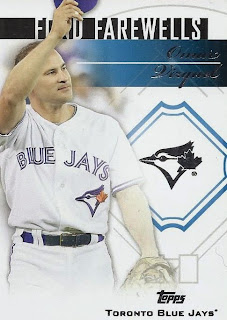 My most wanted Update insert card bites the dust as Omar Vizquel finally gets a Topps card in a Blue Jays uniform. 2 years too late, but better late than never. 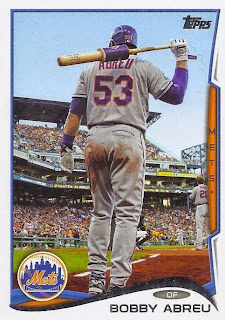 I'm not sure if this was #2 on my Update wantlist, but this SP variation of Abreu should have at least been up there. I'd rather it was Citifield looming on the photo, but (I think) PNC park is a worthwhile substitute. 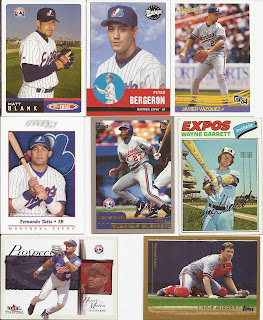 Expos Megamix! I think that is an interesting mix of cards for that binder. I can't believe I didn't have that Vladdy in either his binder or the Expos one. 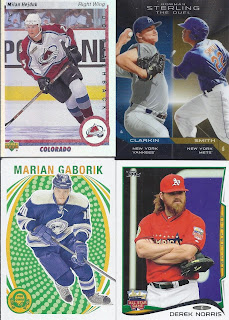 And miscellaneous additions to my 2-14 collection. The Hejduk is from a UD insert set in 2000. How can it be shinier and nowhere near as flimsy as UD's attempt to salute this set 10 years later? And yes, that Gaborik is really garish. That was not one of the finer OPC designs for that parallel set. That Clarkin/Smith card might be the only one ever where I'm more interested in the Yankee portion than the Mets portion.

And that's it for the non-set building singles. Tomorrow. Signatures and Swatches!
Posted by buckstorecards at 13:51