Since I went full bore into O-Pee-Chee for the set build this year, I opted to leave UD alone except for interesting singles, and perhaps a pack or two here and there.

I did some of each at the Expo, getting some packs and some singles. I'll start with the singles. 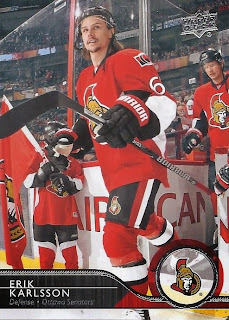 I might as well lead with one of the two Senators singles I got. A pair of these flagged entrances made my list of the top 50 Senators cards in my collection. I'm not as in love with this, since it isn't as beautiful a card with the vertical photo as opposed to the horizontal one. 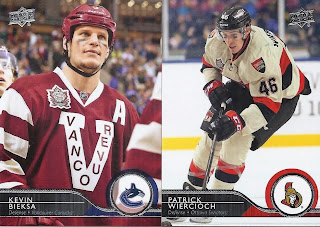 Here's the other Sens card, combined with a Kevin Bieksa from the same game. The Heritage Classic/Stadium Series/whatever it was called out in Vancouver. The Vancouver Millionaires jersey makes another appearance on cardboard, and I might like the white Sens Heritage uniform over the black one. Maybe. Although maybe it is just familiarity. 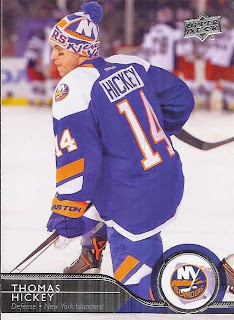 And here's one more from an outdoor game. Hockey cards with toques are always beatuiful. 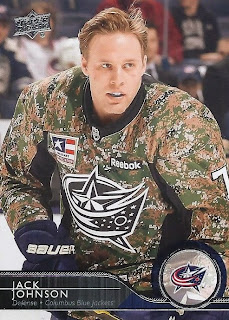 One more alternate jersey. Or a warm-up jersey. Of course, I'm an idiot for not picking up a second base card of this to send to TMM. 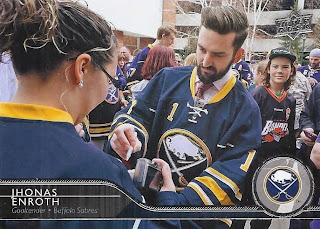 As interesting as this is as an autograph shot, this might be even better for the Buffalo Bandits jersey in the background. A lacrosse jersey on a hockey card. Again, something you don't see a lot of. Even in the background.

And I got a pack. 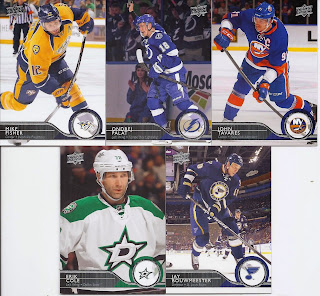 Only 5 cards in the pack, so that means I got a hit. There are a couple nice ones here, though. I love the lower angle shot on the Bouwmeester. The Palat is also interesting, since it looks to be a photo some moment in the youngster's short NHL career. Unfortunately, the short write-up on the back doesn't clue me in as to the source. 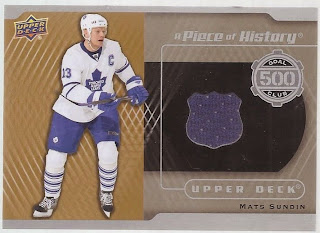 I'll admit I didn't think too much of it. It's a nice non-white swatch of a Hall of Famer . It wasn't until Tuesday that I actually looked at the back of the pack to see what rate these fall at.

I was under the assumption this was a standard jersey card that came at a rate of about 2 per box.

I was off by a little bit on that estimation.

Not really 2 per box. At that rate, that is far beyond a case hit. And then I looked at ebay.

Cue the spit take. I figure I can get half that for a card with a small ding on it.