A simple concept. Pick up two surprise boxes at Dollarama, and rank them on the contents contained within, adding points on a completely arbitrary basis.

I'll open with listing the contents of each:

Now that we have the line-ups, time to dig in to Box 1 with the Upper Deck pack.

The best you can hope for is to hit a card or two for your PC, and I hit two, adding a Paul Reinhart to my Rangers alum collection, and a Dave Lowry to my 2/14 collection. How did I not already have these cards in the first place? Either way, +3 for each of those, but I'll deduct one for that nightmare inducing Petri Skriko sketch. The rest of the pack were Ray Ferraro, Adam Oates, Rich Sutter, Brent Ashton, Mike Lalor, Pat Flatley, Don Barber, Kelly Kisio and Geoff Smith. 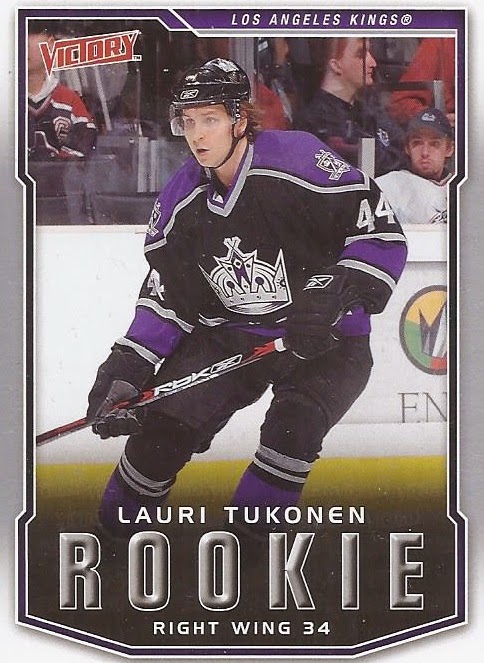 2007 Victory was pretty bland. Lauri Tukonen didn't seem to have any cards outside of 2007, so that's the sole highlight. +1, I guess for that somewhat oddity.

But for all the blandness with Victory, Choice actually hit some of my collections. Although I have that Darth Gerber card in my mask collection, I don't have it in my Senators collection. +1. The Gaborik is Gaborik-y enough to make the 2/14 collection, so that will match the Lowry with a +3, and there's the obligatory Wolverines alum to send off to TMM. +1. That's a parallel as well! 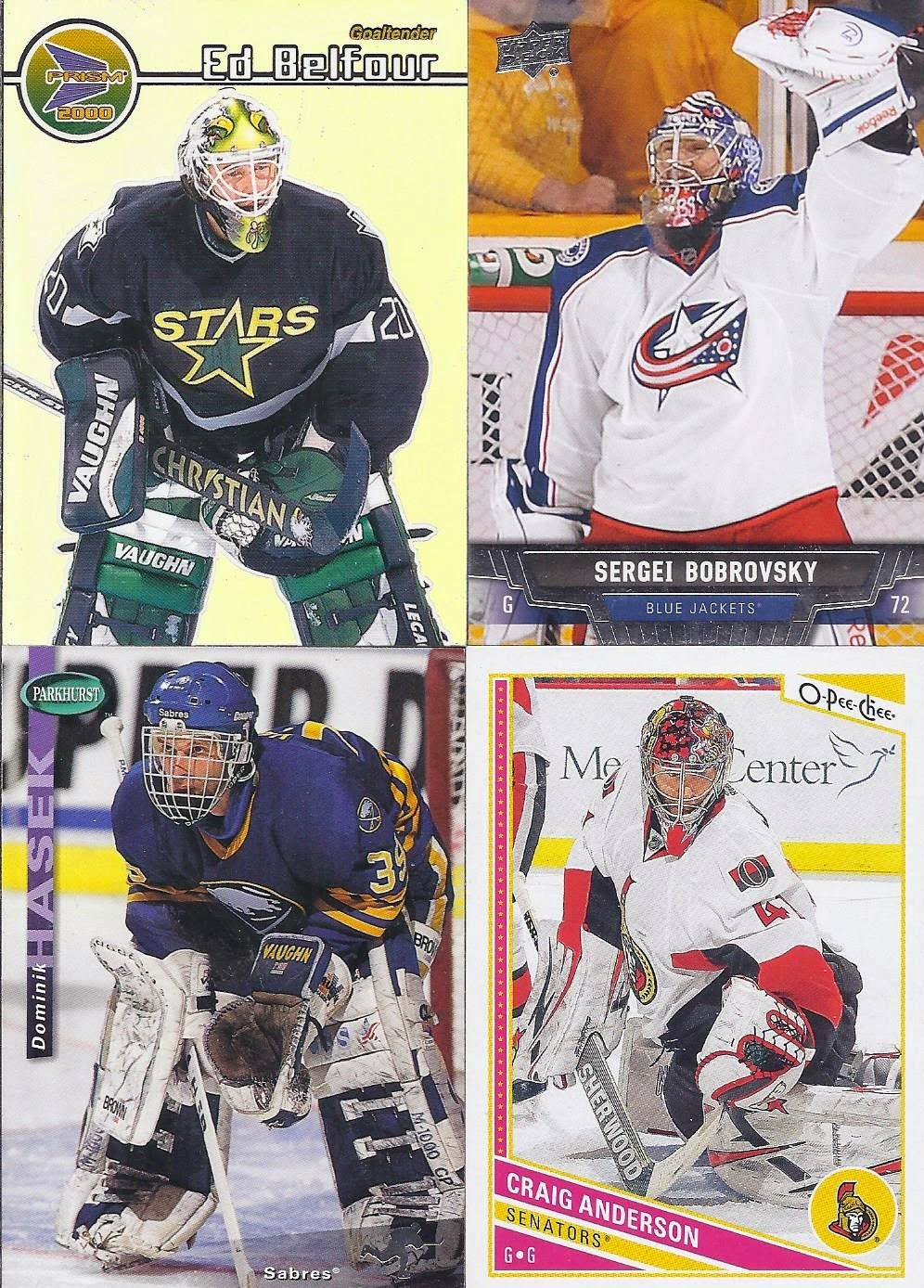 And the goalie pack guarantees some mask binder cards. Much like the Gerber, I think I've got that Anderson in there, but not in my Sens collection. +1. I'd give a positive to that Bobrovsky, but the mask does seem uncharacteristically blurry for a card from UD. The nice shiny Belfour makes up for that. +2 there. Sorry, Hasek, but you're odd man out here. 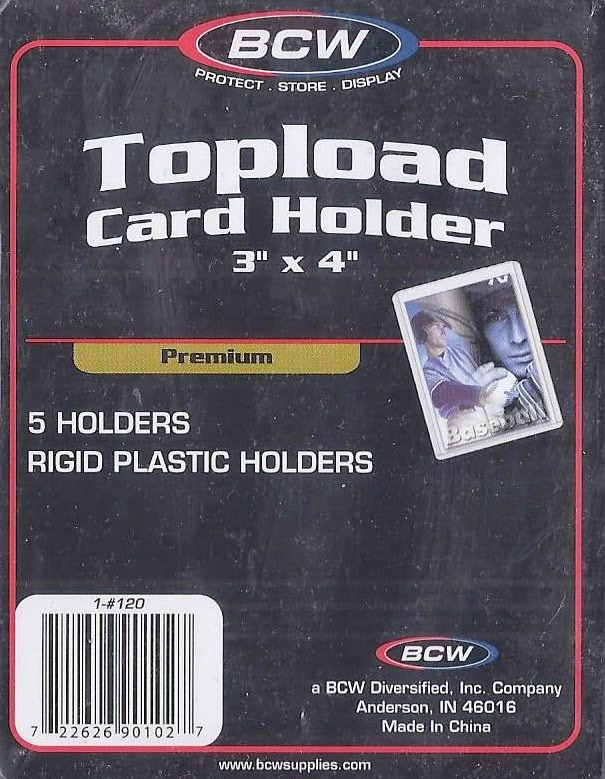 I'll start with giving a +1 to the top loaders. I always seem to need them when sending out cards, but can never find them. I'll probably misplace them between now and my next mailing. 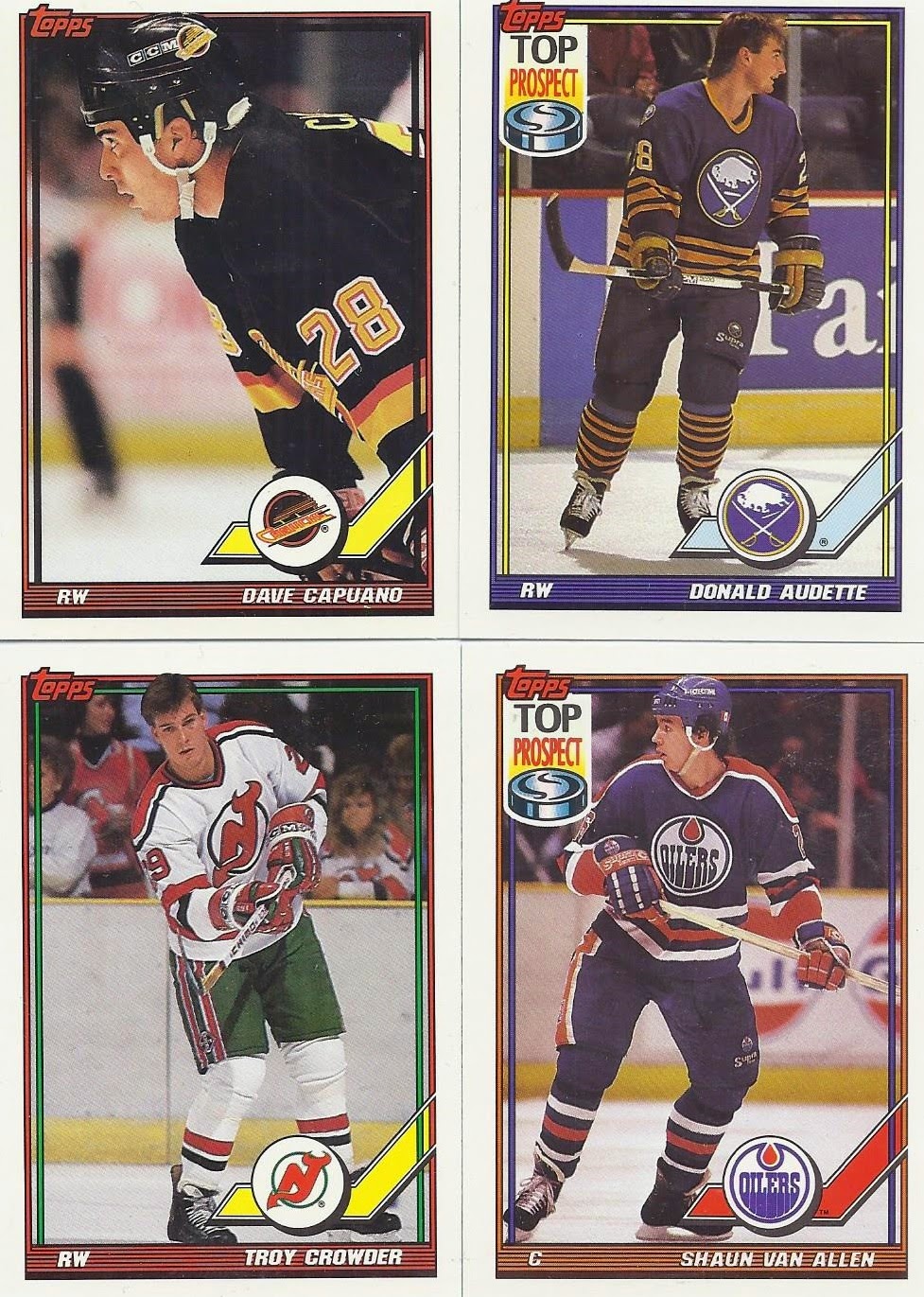 With junk wax era cards, you try something to make them more spectacular than they are. EG: Check out the massive 90's Jersey mall hair on the woman in the front row. If MTV started showing Jersey shore then, they'd need a vertical wide angle lens. Dave Capuano makes me think of the Kids in the Hall and the "Daves I Know" song. And justl ike with Dave Capusano, I hardly know him. And there's a couple of Top Prospect cards that had respectable 10+ year NHL careers. +1 for each of these. Rounding out this pack as Glenn Healy, Sylvain Lefebrve, Brad Marsh, Mark Janssens, Pat Elynuik, Brett Hull (Scoring leaders insert), Ulf Dahlen, Brian Glynn, Mike Tomlak, Ed Belfour and Adam Oates.

The 2007 Victory was more interesting here. A pair of J-SG cards for the mask binder (although the base card might be a double), and a retro jersey makes a Toronto Maple Leafs card bearable for this Sens fan. +2 for each mask card (more than the first box because I love the double duck design), and +1 for the throwback gives this a +5.

The Hall of Fame pack with a guaranteed HOFer actually gave me two. But, I'm certain I've get several of those. The Terreri is an interesting photo with the face full of snow, though. So, that's a +1 for here.

Box #1 wins easily, based on hitting 3 cards for my PCs with 2 new 2/14 cards and a Rangers alumni, but Box #2 was more consistent in building points. So, it was closer than the score makes it seam.
Posted by buckstorecards at 15:59