The two packs of Topps Update Jumbo I posted yesterday were nothing but dupes among the base. As a pick-me-up, I picked up some repacks. A hockey Surprise Box at a Dollarama and a 100 card basketball repack from Target. Sure, it might be junk wax from a set I never collected, but it should at least be fun to bust them.

For this morning, the hockey. 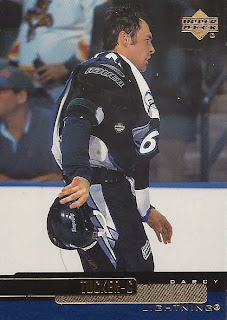 When I posted a Petr Svoboda card a couple weeks back, I was amazed that this was a card that actually featured a fight. This Darcy Tucker might not have featured a fight, but it certainly featured the aftermath of one.

Here's 3 new cards for the mask binder. I really should resume masked Mondays again. PErhaps in the new year once I'm done with my top 50 Senators cards. The rest of the pack included guys like Gilmour, Turgeon and Comrie. Yes, Mike's brother. No, Dennis @ TMM, he's not a Wolverines alum. 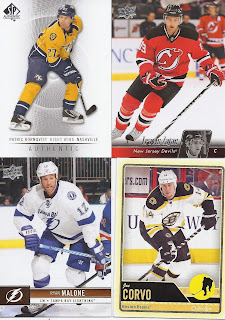 I guess the card of the former and future Ottawa Senator Joe Corvo is a highlight here. 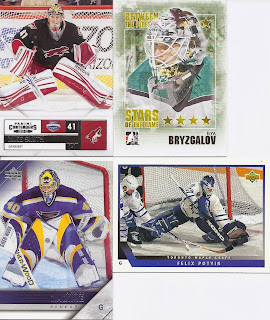 3 for 4 in new cards for the mask binder. It is a clean sweep for candidates, but I've already got several of the Lalime.

And to wrap it up, the HOFer pack. 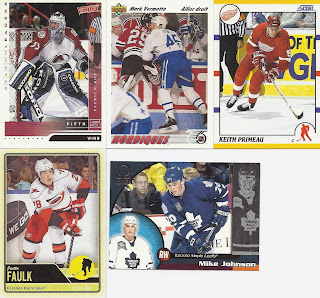 Nice Roy for the mask binder. I guess the French Vermette card is my other favourite.

Lots of binder stuff in this repack make this a definite winner.
Posted by buckstorecards at 06:09