Let's get to the rest of the non-CFL box. 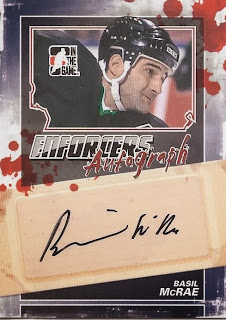 I added 3 autographs to my collection yesterday - this one was the only non Senator of the bunch. OK, so it isn't really primo penmanship on this signature, but I really do love the Enforcers set for adding some autographs of people we really don't see a lot of into the market. 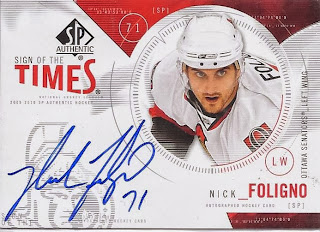 Here's the first auto, albeit of a former Sen. There were a couple of his in this $2 bin - I opted for the one with the largest on card signature. Size does matter - or at least influence my card buying decision. 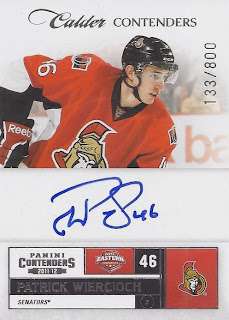 Hey! This guy is still a Sen! 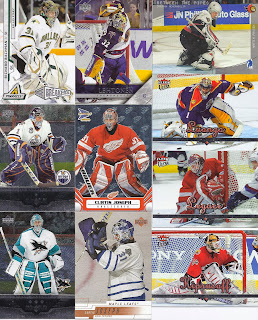 And to wrap it up, here's 9 new cards for the mask binder, plus a new cards for my Senators collection. The dime box highlight here is the triple diamond SP of Evgeni Nabokov. I'm disappointed there aren't any cards of Richard Bachman in this year's sets. I would love to see his "The Shining" mask preserved on cardboard. I've also got a couple of classic Cujos there, and the Panthers era Luongo mask isn't to shabby either.

That and yesterday is $15.00 worth of cards, minus a 4th relic I picked as trade bait. You'll have to wait for that to show up elsewhere.

Tomorrow,  obscurity will reign supreme as I post a bunch of CFL cards!

Posted by buckstorecards at 14:47