Iffy weather is going to postpone the mailout. They should all be in the mail tomorrow morning. Everything is in bubble envelopes and addressed.

Starting off, here come the autos! 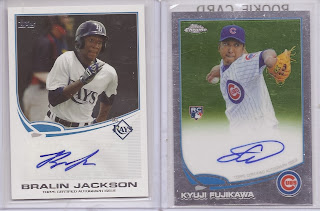 One for the randomed Rays spot, (congrats, Jess!) and one for the Cubs spot, who were not bought/randomed. As I mentioned earlier, I didn't want to end up with more than half of the hits, but that's what happened, as I got this Fujikawa, the Giles from the repack, and two more that will show up later.

I was going to offer the Giles as the randomed card, but I offered a choice between this one and the Giles to the randomized winner.

Spoiler alert. I put all the purchased teams in the randomizer whose teams didn't get an auto/relic/manu-patch, and it was the Orioles slot that came up on top after 3 randomizations, and a mis-click on my part. I dropped Ryan H a note, and he opted for the on-card Fujikawa.

The good thing is that the Orioles/Padres slot was one of two participants that didn't even get an X-Fractor for either their chosen or bonus team, so that was quite nice to have the hits spread around.

And now, for the base cards (such as they were for a hot box). 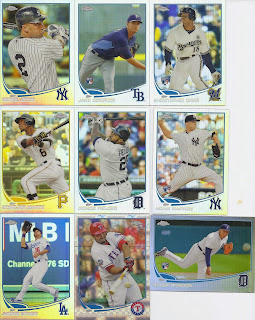 The second X-Fractor of the break. Nice that 10 of the 16 cards from this portion went out. 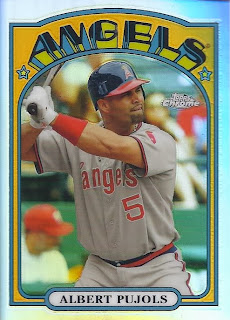 Unfortunately, this Pujols could have gone out, but the randomed Angels were traded away.

And with these 15 cards from Pro Debut, half the cards went elsewhere. Yay!

Part 3 will go up tonight, and we'll see a pair of numbered cards make an appearance, including the nifty mascot manu-patch. It will go to one of the chosen teams. Find out if it is yours!
Posted by buckstorecards at 07:50