If you saw the post, you'll know the Chrome box was a hot box. That means that there were no base cards in the box. Only refractors. In fact, the only non-refractors were the two autographed cards. It was strange going through the box looking for a different looking card, only to realize that they was no base.

The only bad news is that the bonus packs were of the hockey variety, and with no way to distribute those, they aren't part of the break. Although I think a certain Wolverines alumni collector would like the glossy Mike Cammalleri.

I included the opening of the box to show what the bonus was. From there, it was 4 packs at a time, in order to make scanning manageable. 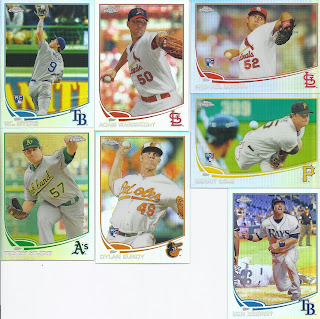 I'm only going to scan the hits, the parallels, the numbered cards and the inserts. Unfortunately, in terms of volume, we didn't get off to the best start. However, we did get some solid rookie refractors with Bundy, Myers and Cole. That's a beautiful photo on the Cole. 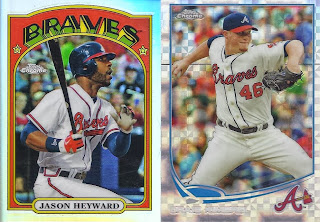 A pair of Braves among the inserts. I did offer the Braves as trade for the Giles auto, so I didn't feel to guilty about ending up with these two. These, along with most of the cards that didn't go out in the break, will be up for trade.

8 packs down - and no hits. 5 more uploads to go, and as a spoiuler the rest of the way home - this will be the only 8 pack without at least a numbered card.

Posted by buckstorecards at 15:34