I could have titled this under $15.00 at a card show, but then I spotted someone selling boxes of 2003 Pacific CFL at $15.00 for a hobby box, and I couldn't resist busting a box. I'll probably get to the great cards from the 3-down game later.

If it is a show in Canada, it is going to be hockey instensive, and that's what this was. I did end up with a grand total of two baseball items, though. 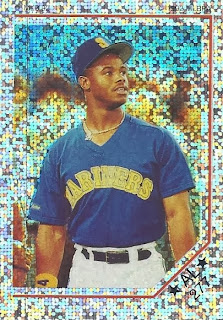 Yowch! It isn't as bright in person, but is still pretty loud. It is from the 1992 Panini sticker set, and I just picked it up because I thought a certain Junkie might be interested in getting a PWE with this this sticker within. 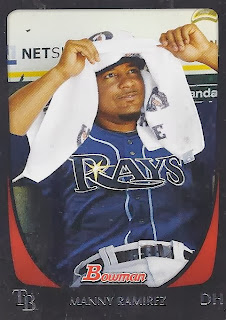 I just grabbed this because I figured there couldn't be that many cards of Manny in Rays colours. 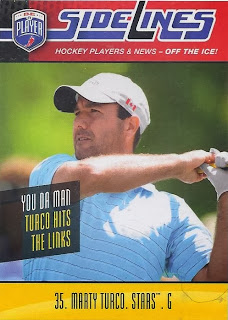 And to wrap up the non-hit portion of these cards, here's a definite oddball of Marty Turco. This one is bound for a Wolverines collector at some point. 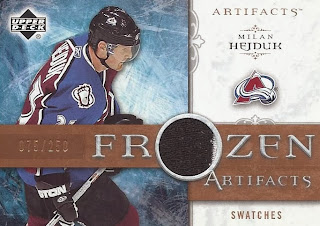 Bringing on the relics, I can't have enough in my 2.14 binder. So, here's the only new one of the day, a barely two-colour relic of Milan Hejduk. Cmon! Somebody sign him so I get cards of his on a team other than Colorado. 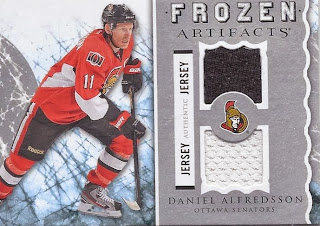 He might be a Red Wing now, but I'll still never pass on a relic of Alfie. 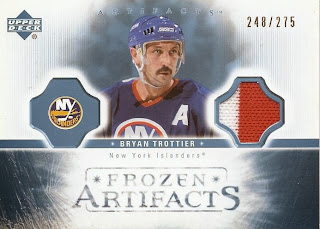 And finally, two bucks for a two colour relic of a first ballot Hall of Famer? And it is even a game worn as opposed to event worn? Take my toonie! Take it!

This covers about half of the non-CFL $15.00 I spent. Tomorrow, I'll get to a trio of autographs, and some masks.

Posted by buckstorecards at 10:27