I think this was the best 8-pack of the break. The Puig is nice, but it is only a base card. Myers is /75, and the Dunston is a parallel /50. The card shows him with the Boise Hawks, and it goes to the unclaimed Cubs slot. We've seen 3 of the 4 autos so far, and 2 of them were Cubbies. I thought it might have been a Jays card, but I confused him with Dwight Smith Jr. 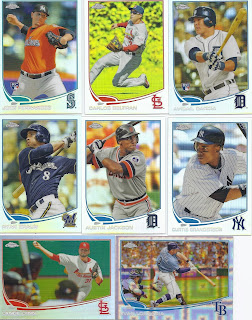 The Florida teams really did well in this portion, getting the Jose Fernandez refractor, and the Xfractor of Longoria. The Beltran, with the ivy backdrop, looks great in refractor form. 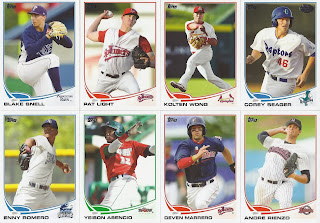 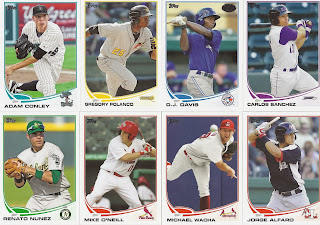 And here's the Debut. A few of these players have already made appearances in the bigs. Wong. Romero. Rienzo. Wacha. I'm probably missing somebody.

Posted by buckstorecards at 09:41