You Take it on Faith

Since there is no chance that I'll be busting an Update Jumbo box until Tuesday at the latest, I'll spend some time with a repack. I've busted the baseball and basketball "10 pack repacks" in the past. How about football this time?

The repack contained these 10 packs:

An interesting mix. I'll spread this over two days. If there are more card than fit on the scanner, I'll only hit the highlights of the pack. If they all fit, I'll show all of them. Easy to understand, right? 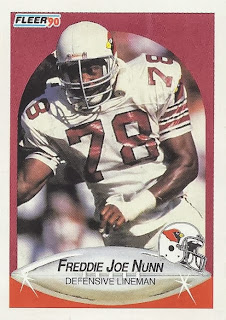 Hey! One of my favourite names in football of the late 80s and early 90s. What has he been up to since then? High school coach? Maybe college?

As I've said before. I miss seeing kickers getting cards. 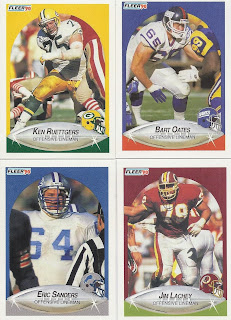 And I miss seeing offensive linemen getting cards. This pack really delivered them in spades. On another note, this design might have been one of my favourites from the junk wax era, for its working of the team colours into the border. 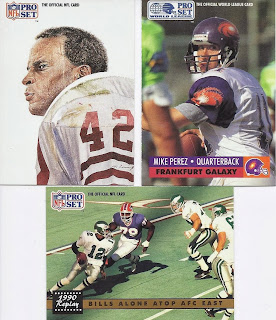 Staying with the era, here's the highlights of the Pro Set pack. I guess seeing Bruce Smith honing in a Cunningham is the photographic highlight here. I've also got a sketch card of Ronnie Lott and an obscure team card. 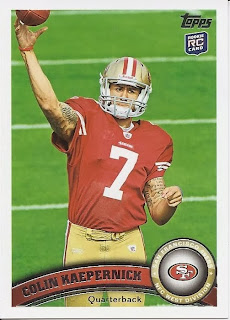 The Topps pack gave me probably the best card of the break in this rookie of Colin Kaepernick. Or Colin Pumpernickel, as per my spellcheck. Even though I did end up with a relic card in one of the packs, I could have purchased 3 of those for the cost one of these at COMC. 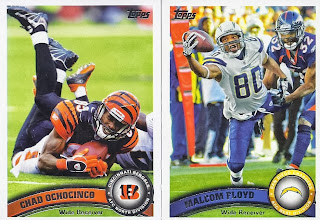 As well as a pair of great photos, especially the Floyd.

That's enough of ones where I have to choose which cards to highlight. Here's one where I can show all the cards, such as they are. I really don't know, nor really care what Press Pass' licensing allows for, but you'd think they would at least try to work the team name in somehow to the design. The 'state' doesn't even refer to where they went to school, but their home state. Which explains why it says 'TN' on Cobb's card, but he isn't wearing orange. 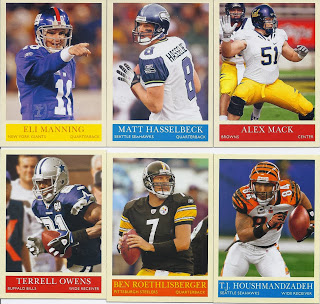 Well, at least I pulled a bill from the pack of Philadelphia. Or at least someone listed as a Bill. It really doesn't compare to the photo of Alex Mack doing a really impressive 'trapped in a glass box' piece of miming.

It is a decent enough start to this.
Posted by buckstorecards at 12:53