More from the new repack!

These cubes are a lot of fun. I couldn't resist grabbing a second one. I was even happier with the contents of this one. The misc packs apparently aren't searched, as I pulled a relic card from one of them. There was also a canvas card among the loose cards, and the Vanbiesbrouckest hot pack I'd ever seen.

I'll probably got to that repack cube over the next couple of days. But now I'll stick with the goodies from the first cube. 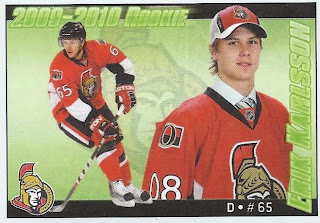 While a rookie sticker isn't the most spectacular, this is still a nice one. As someone who remembers all of the draft pick cards from back when, it is nice to see them still used on the design for this. There's a large rookie portion of this album, not SP'd apparently, and I did pull a nice variety, from stars like John Tavares to cup of coffee players like Kris Chucko, who had to retire after only 2 NHL games and several concussions. 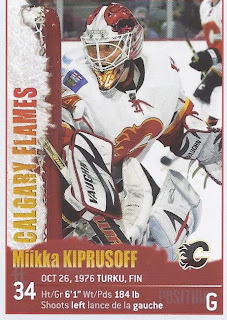 Back-to-back stickers! A mask binder item. Maybe due to the fact that sticker sets tend to trend younger, the goaltender cards that I've found include "cool" mask shots. That's as good a hypothesis as any. Don't look gift binder material in the mouth. 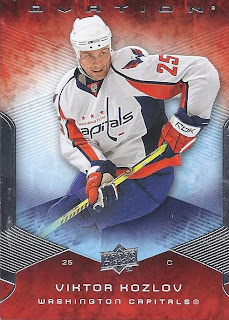 WOO-HOO! A new Kozlov for the 2/14 binder! I'm sure at least one person is going to think I'm crazy at the show when I present a dime bin pile filled with cards of Kozlov, Gaborik and Hejduk. I've still got to pass the "I know someone who collects Gary Redus cards" expression from earlier this year. 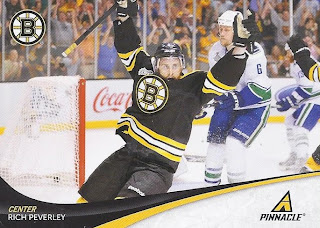 Another great shot from the Pinnacle set. It's a dupe for me, but it's still a photograph worth showing again and again. 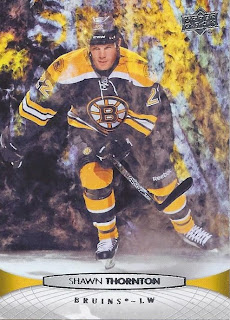 The Bruins sure had a nice collection of outstanding photographs in this cube, wouldn't you say? That's the third one in my top 20. 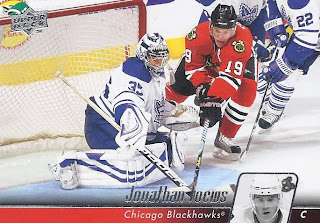 My only complaint about this card is that it could have been framed just a little better so as to make the puck easier to see. It is obscured by Toews' name. However, looking back at the boxscore of the only Chicago/Toronto game during the 09-10 season shows that Toews didn't pick up a point. So, it's mooter than it appears on the card. 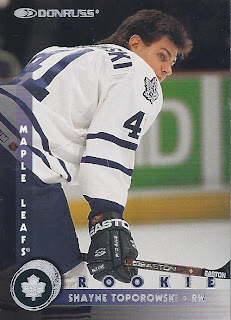 I always love coming across cards of players who really didn't have too many cards during their careers. This Donruss issue and its parallels are one of only 2 NHL issues he had. 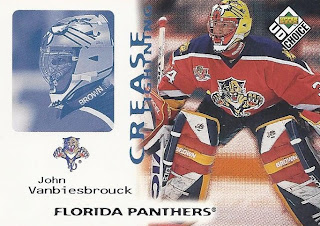 Only one Beezer card in the pack? Bah! My one pack of Donruss Priority in my most recent cube tripled that. Mask binder card #2 from today's post. 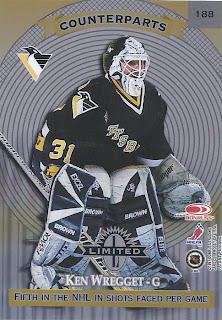 This was one of the visible cards in the repack cube. You knew they were stretching for leaders for the cards when Top 5 in shots faced per game is a category worthy of inclusion. Congrats! You had a really sketchy defense playing in front of you! The other side of the card is Mike Vernon, who lead the Western Conference in Playoff GAA on his way to a Stanley Cup and a Conn Smythe Trophy. You'd think counterparts would include players more closely associated.

That's my Top 20 alphabetically from the first cube.

Posted by buckstorecards at 13:39