Trying on some Black Diamonds

A trip to Wally World was on the agenda for yesterday. I can't make a trip there without making a trip through the card aisle. Many temptations awaited, but I limited myself to a hanger pack that contained 3 packs of 2012-13 Upper Deck Black Diamonds.

3 packs with 5 cards each (or 6 in one of them). I don't want to scan all of them, so I'll simply show my favourite card in each. 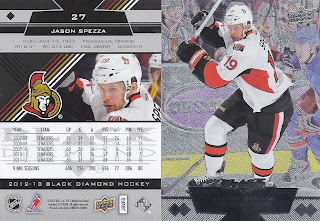 The third pack didn't contain any sort of hit or multiple diamond, so I'll just post my favourite base card from the 5. While it did also contain a Mike Smith card with his incredibly great Wile E. Coyote mask, I can't vote against a Spezza card. In terms of the more hit-based Upper Deck product, I'll easily prefer these to the Artifacts since they don't completely obliterate the background of the picture, but still let the player stand out against it. I wish they didn't recycle photos to the back, but the design is also very nice and clear. 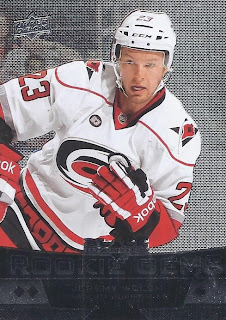 The only multiple-diamond card I pulled was in the second pack. Jeremy Welsh spent more time with the Charlotte Checkers as opposed to the Hurricanes, but it is still a nice card. The name is a lot easier to read with the card in hand as opposed to on a scan.

I kinda hinted at it when I mentioned one of the packs contained 6 cards instead of the supposed 5, but the first pack I opened saw this nice relic appear. 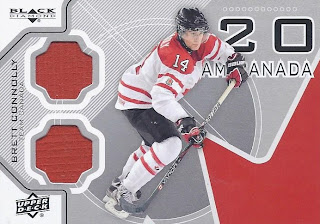 It's supposedly from the 2011 World Juniors tourney. It would have been nicer and definitely more patriotic with both a red and white swatch on the card, but that's a nitpicking thing. There is a hint of stitching near the bottom of the lower one. Brett's in the Tampa system, but he spent more time this past season with Syracuse in the AHL.
Posted by buckstorecards at 09:27