As I continue to work my way down to the zero in my Ottawa Senators Frankenset, the Expo helped as the cards needed were reduced to 20.

The real problem with this set is that zistle doesn't always have the team attached to the player, so there are some folks who suited up for Ottawa that don't appear to have cards. Once such person was on the first card. 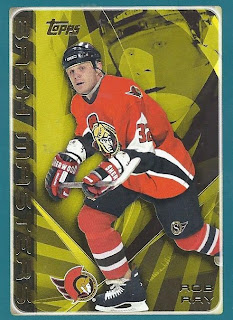 One of hockey's more infamous lunatics, is probably best known for his time with Buffalo. Specifically, I'll assume he is best known for pummeling a fan that decided through what one would assume was an inhuman amount of drinking, to go after the Buffalo bench.
Total time with Ottawa - 11 Games. The card was only one of two from his time there. 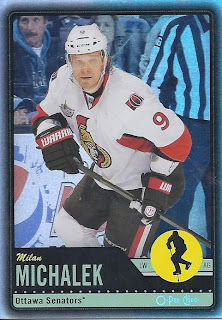 I didn't really have any plans to upgrade any of the cards. I really just used the first card I found of the respective player in my binders/boxes. But, since the original Michalek was the base card, I figured upgrading to the parallel wouldn't hurt. 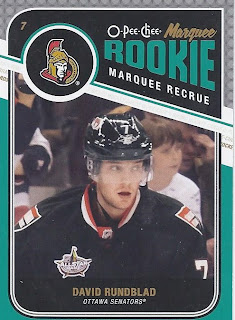 I really don't want to use hits as cards in this set. So, I was looking a replacement for the David Rundblad "All The Kings Men" relic This did it. David's career in Ottawa was short-lived, as he was shipped out to the desert for Kyle Turris. 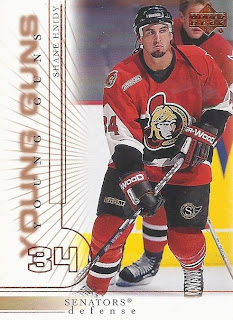 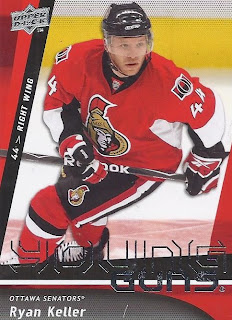 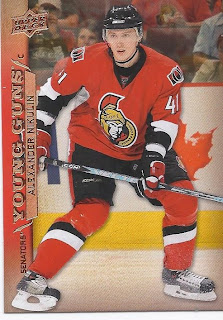 Here's a trio of Young Guns cards. Hnidy was another one of the cards from the 13 for $5 bin. The other two were a dollar each. Hnidy was the most prolific of the lot, having 550 games to his credit, and even picking up a Stanley Cup ring for his last season in Boston (after playing 3 regular season games that season). Despite a decent career, he only had a handful of cards to his credit, with only a couple coming from after his rookie season. Keller only played in 6 total NHL games, and this was his only big league card. But that it is twice as many games as Nikulin played. 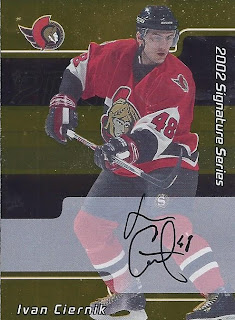 And to wrap it up, a hit for $2.00. It will function as a placeholder until I can get a base card of Ivan. 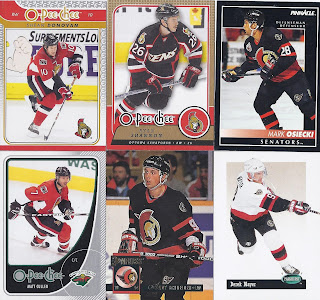 And here's 6 more that I added. Osiecki and Schneider were two others that were similar to Rob Ray in that I couldn't find zistle evidence of the Sens card until one was before my eyes. While Cullen is technically a Minnesota Wild in the card, he's in an Ottawa uniform and that's enough for me. I'll have to do the same with Cory Stillman, as he's in a similar situation, albeit with being listed as a Panther.

Posted by buckstorecards at 17:14