Another day, another trip into the goodies. Warning: This post will be very, very yellow. Let this box image serve as a warning before you scroll down. 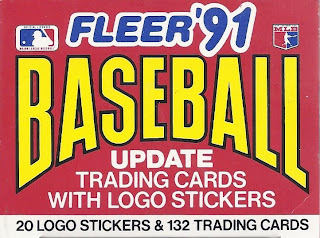 2 bucks for a set of cards? Sure thing! It might not be one of the more loved designs, but at less than 2 cents a card, I can overlook that.

There was only one problem that appeared when I was collating the set. I got 132 cards, but two of them were dupes, and I was missing 2 cards. It was still sealed, so I'm guessing I can write to Fleer and get this little problem sorted out. I mean, they must have plenty of Dave Righetti and Willie McGee cards sitting around a warehouse somewhere. Right? Right?

Actually, one's on the way through zistle. The other I'm sure I'll add on to a sportlots order someday. 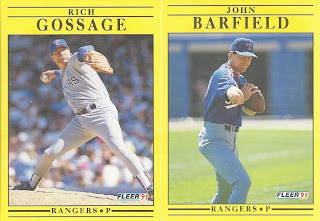 These were the two extras. I'm more upset I waited until after I sent out a package to Nick @ Dime Boxes before I checked the set, as I'd assume he'd like the card of John Barfield with the football. Or perhaps somewhere, there's a person with two Righettis and McGees that would like trade for these two missing from their box.

You'd figure if something nefarious was happening with the set, one of these three players that made their Fleer debut in this set would be missing. 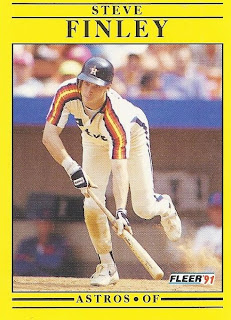 For all the talk about the yellowness of this set, there's actually some interesting photographs in this. The shot of Steve Finley almost wiping out after what looks like a bunt attempt. Perfect framing with the visible dust cloud and everything. 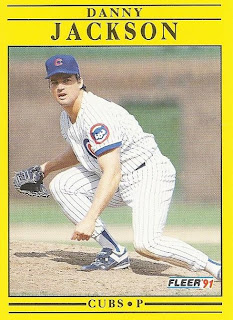 Here's another nicely framed shot. Danny Jackson ready to field a ball, combined with the early spring bare outfield walls of Wrigley in the back. 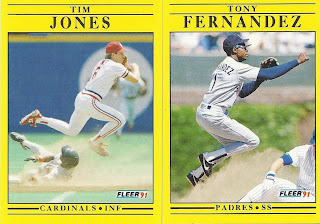 There were even a couple nice double play photos. Tony's card features a later season return to Wrigley. 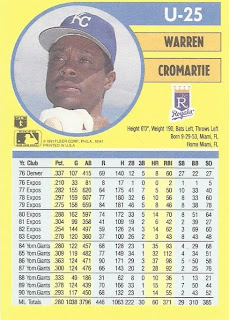 The backs were, well, 1991 Fleer backs. If I had to pick one, I'd pick this card of Warren Cromartie because it had statistics from his time with the Yomiuri Giants.
Posted by buckstorecards at 16:26

Email ThisBlogThis!Share to TwitterShare to FacebookShare to Pinterest
Labels: shows