Another adventure with one of those $12.95 cubes of cards from Walmart. They contained 5 packs of cards, which consisted of:

10 packs of Panini stickers, 1 from 08-09 and the rest from 09-10. In addition, 55 loose cards. My first one surprised me by having a lot of recent stuff among the 55, with only 2 junk wax era cards. One good repack deserves another purchase. So, let's dig in!

The biggest surprise came from the 2010-11 UD pack. I'd assumed the packs were searched thoroughly before getting placed in the cubes. I expected nothing better than a Young Gun card. But this pack seemed heavy. Must be a decoy card. 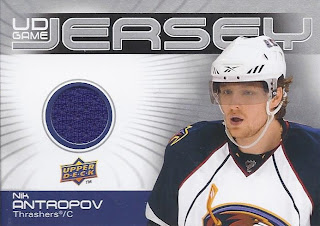 That was a surprise. Sure. It is only a Nik Andropov relic. But it is still a hit, and I certainly wasn't expecting to find one in the repack.

The other big surprise came among the 55 loose cards. 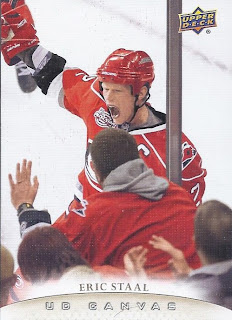 A Canvas insert. Again, it isn't an overly valuable insert. But seeing it just pop out while thumbing through the random cards was a shocker. 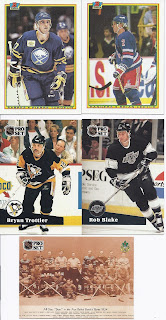 There were 3 more junk wax cards than the previous cube. But at least they all feature some pretty good players. The Pro Sets are French, so they are just slightly overproduced as opposed to massively overproduced.

I can think of a Michigan collector that will be really interested in these three cards. Yes, they are already put to the side. 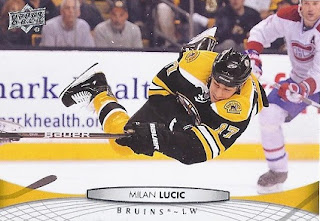 This was probably the best photograph of the bunch. Back-to-back wins for the Bruins in this department. Thornton won it last time for the Bs. 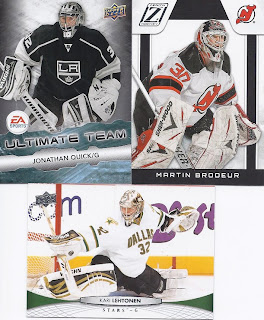 And a trio of mask cards for the binder among the group of 55. The Quick is another insert card from the UD set. 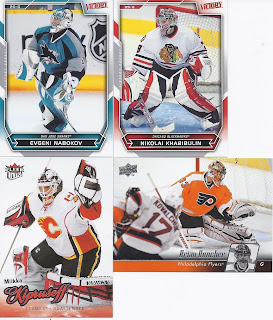 And there were some mask binder certainties among the packs. 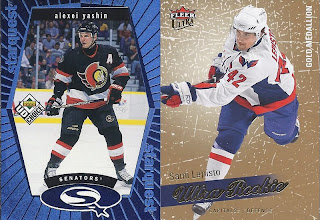 There wasn't much to write home about among the other packs, though. A Sami Lepisto gold parallel doesn't really have the same oomph as a Derick Brassard.

But there was one more pack. The Donruss Priority. 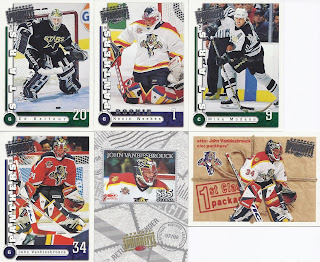 Pretty much the definition of a hot pack. If John Vanbiesbrouck was your favourite player, you would have loved this pack. And you even got a bonus Panthers goalie card to make it team and position hot pack as well. 5 out of 6 cards on their way to a specific binder. That's a pretty good ratio!

And to wrap it up, here was the best sticker of the 10 pack. 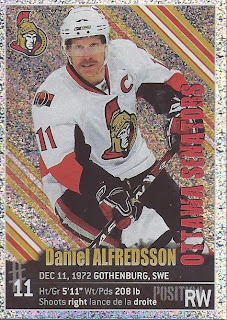 Posted by buckstorecards at 14:40