I've already showcased some of the cards that made their way into my Ottawa Senators Frankenset. Today, some cards from the third set I'm working on. Players who made an early stop in their hockey careers playing my hometown Kitchener Rangers. It's a varied crew, and I have acquired most of the cards from guys, but am still 10 out as of this writing. Mainly from guys from before my time as a collector, and guys who only had cards in their rookie years.

But, I'm not going to dwell to much on the Garrett Burnetts and Claire Alexanders of the collecting world today, and will instead focus on the ones that dropped off my list at the Expo. Most of them come from before my time, so its really going to be more along the lines of posting cards as opposed to memories of the players. 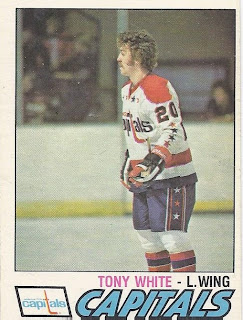 Pure 70s. In the sense that we really need more cards where the featured player looks a little like a homeless Robert Reed. 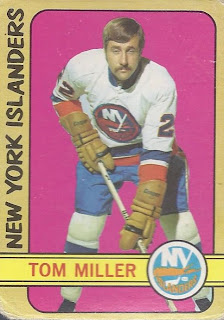 But, he does look more coherent than Tom Miller. Tom seriously looks like he had the drinkingest night ever the previous night, forgetting that the next day was 'hockey card photo shoot day'. I don't think a photo of someone that messed up had ever been preserved for posterity until Nick Nolte's mug shot surfaced. 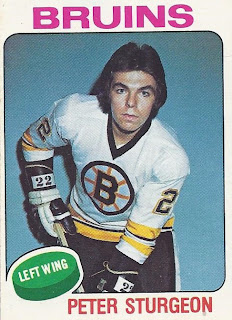 Peter only played in 6 NHL games, but I'm still proud to welcome him into the set. If for no other reason than the cartoon on the back of his card: 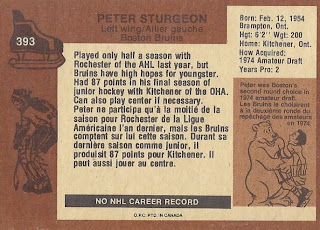 It also would qualify as a Zero Year card for Nick @ Dime Boxes, as those 6 games he played were exclusively for Colorado. 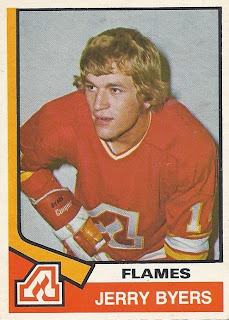 As best as google can tell me, Jerry is the only player in my collection that has passed on, having lost a battle with cancer in 2006. He spent a few years bouncing between the North Stars, Flames and the NY Rangers before retiring and becoming a golf pro in the Maritimes. 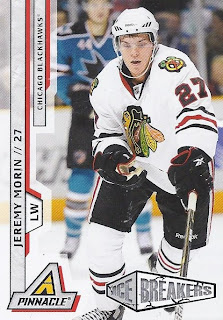 Finally, someone I remember! He only spent one year in OHL before being drafted by the Thrashers, and getting shipped off to the Hawks before even playing a game there. He's spent most of his time in the minors since then, but has tasted the bigs for about a dozen games. 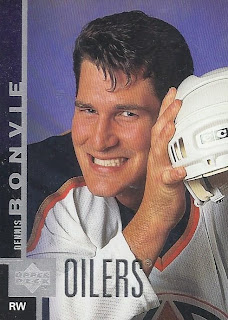 Dennis only played 6 games with the Rangers in his career, but he still counts for this project. Technically, this is actually a card I got through sportlots, but it is really to unique not to showcase.

Posted by buckstorecards at 16:18