An envelope jammed with cards from the March Group Break (04 Diamond Kings and 05 Cracker Jack) and April (a case of 2013 GQ) rolled in. I elected to have both shipped together to save on the shipping costs for Samuel.

I'll just focus on the hits from the latter now. I toiled with picking either the Blue Jays or the Mets for it. I thought the Jays appeared to have a stronger hit ratio, so I went with them. As the break drew closer, and a few teams were still available, I also took a small risk and grabbed up the Rockies. I elected to share my extra base and insert cards, so I ended up with about 70 of those combined once all was said and done. But, tonight I will focus on the hits from the breaks. 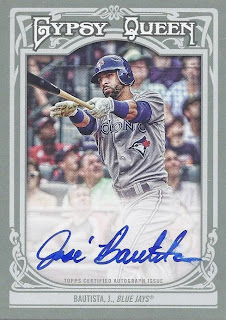 Outside of something with an inanely low number, this was probably the card I was really hoping to see come out of the boxes. A sweet autograph of Joey Bats, smudge notwithstanding. I'm a sucker for cards with really clear signature, and to get one of a marquee player is even better. 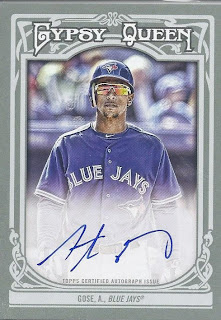 That wasn't the only autograph I ended up with. Anthony is currently playing AAA ball in Buffalo, where he's averaging about a strike out per game. Not good, but I can always savour this video where he stole home earlier this month. 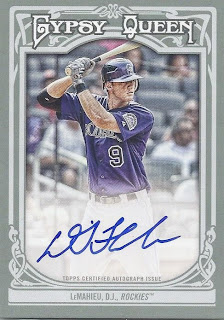 Two autographs deserve a third, so here it is, courtesy of the Rockies. Unlike Gose, at least he's had one at bat in the bigs so far this year. It's clearer than Anthony's as well, as I can kinda parse the first few letters of it. 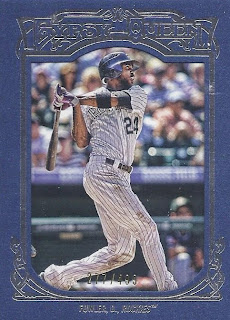 While I did well for autographs, I didn't do so well with the numbered parallels. This one of Fowler /499 was the only one. The card does seem to be one of the better ones for showing how perfectly the frame and the border works with centering on the picture. 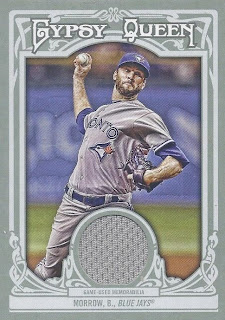 I also did bring home a relic hit of Brandon Morrow as well.

The short prints were the another place where I didn't do so well. There were a few that I could have pulled, but all I got was: 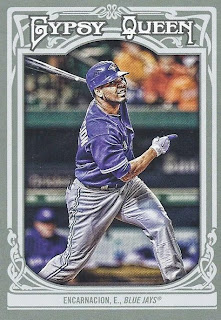 A pair of E5s. No sign of RA Dickey or Tulo except among the minis.

Finally, a move over to the March break. I didn't grab any hits, but still pulled a pretty nice parallel from my randomly assigned team with the Royals. 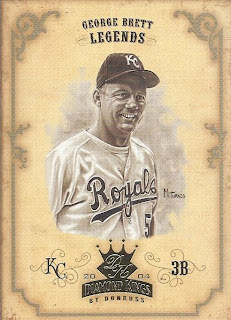 I'm already a sucker for Diamond Kings and their ilk, so ending up with this sepia of George Brett was really nice.

Thanks for the great breaks, and I'll start digging through the rest of them tomorrow.
Posted by buckstorecards at 19:26