Off and running again with more goodies from the raiding of golatender boxes at the show. 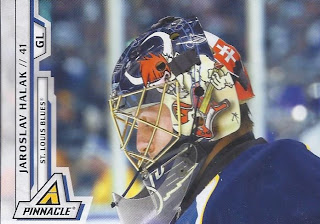 As soon as I set my eyes on an image of this card, it went on the wantlist. The great thing about the Pinnacle sets as of late is that they give a story about the image featured on the card. In this case, it is about the mask design. However, it mentions a character from a cartoon known as "Lucky Luke. Unfortunately, that's on the other side of the mask. Oops. This is just a music playing bull. He's often used the bull motif on his masks, and the guitar is simply there for the Blues team. 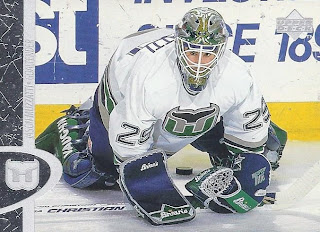 Way back in Week #2 of Masked Mondays, I posted a side shot of this mask. I wanted to add some more photos of this one. Here's a nice front view, and one that shows how nicely parallel this mask was. 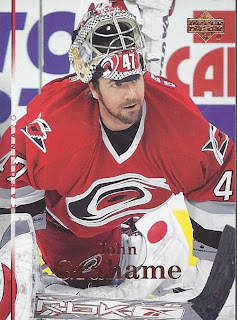 Saluting another sport on your mask is, for me, a definite no-no. It isn't really a good idea to remind people of what they could be watching instead of your game. Just like a member of some local yokel band wearing a Beatles/Rolling Stones/any established band t-shirt. 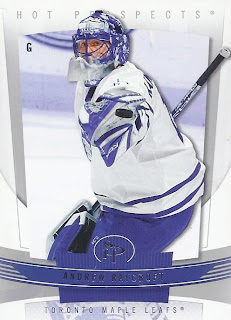 And to leave one that I'm not too crazy about, for one that I really like, in spite of being a Leaf mask. It's hard for a Leaf goalie to resist putting a callback to the history of the franchise on their mask. The Carlton St. Cashbox is front and center, and the big "M" on the side, along with many other Leafs legends.
Posted by buckstorecards at 18:48