Most of my purchases were stuff for my Frankensets, trade bait, and simply stuff I found interesting. My player collections really didn't get a lot of additions to them. In fact, in terms of single cards, not a single player had more than 3 cards in the box.

But, it was a seven way tie for first place, so I'll make a 21 card dent in the box.

Grabbing a trio of cards for my Delgado and Guerrero binders shouldn't be much a surprise.

Even 3 cards of Rusty Staub fit nicely into my collection. I love the old school blue uniform on Rusty.

Now we're getting into the realm of cards that really didn't seem to fit my personal collection. 3 Jack Morris cards? I'm guessing with 2 of them being painted cards, it makes sense in retrospect. Although I'm not sure how that Twins card fit into the mix.

I guess with his recent passing, Earl Weaver was fresh in my mind. Seeing these cards, I'm can just picture Earl giving Alice Sweet advice on putting in tomato plants, among other things.

3 Ichiros? The Perez card fits in. The double bat studio card is suitably goofy. But much like the Morris Twins card, the Heritage is a puzzler as to why it was in the box. 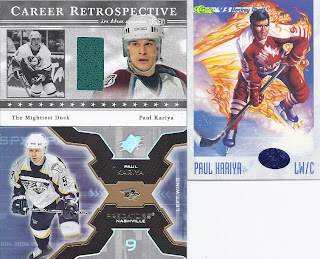 And finally, some hockey. Quite a variety of uniforms for Kariya. My hits collection really lacked that shade of green from the Mighty Ducks era, so I shelled out a toonie for that one. Not bad for someone that should have an outside chance of bieng in the HOF. The Kariya Classic card was part of a sleeve that contained it, and the Predators card. I only wanted the former, so I could complete the 4 card comic subset from the 1993 set. I'd picked up the Manon Rheaume card from COMC on Black Friday. The other two, the Daigle and the O'Neill, were also grabbed at the Expo, so they'll make an appearance here over the next couple weeks.

Posted by buckstorecards at 15:00