Continuing to dig into the box from the Expo. Today, meet the newest members of the 2/14 binder. 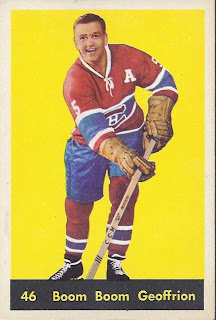 This one was the costliest addition to my 2/14 binder, clocking in at a whopping $2.50. Although I did also grab an Eric Nystrom relic, that one was destined for Dennis @ Too Many Wolverines. Back to this, at the cost, it obviously had to be a reprint from the 1960 Parkhurst set, although I can't find an image where the back presented matches the one I've got. 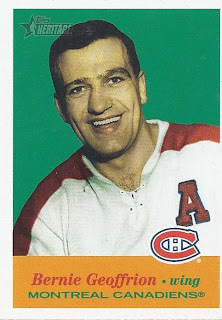 This one came out of the 13 for $5 bin I mentioned yesterday. It's from the 2001 Heritage set. Considering it goes for about $4 at online sources, it was another easy decision to purchase.

And a hat trick of cards from 1992 Ultimate. But these are the ones that highlighted the problem with Bernie's cards.

The Parkhurst (showing some evidence of scotch tape on the back, like I care) and Heritage list his birthday as 2/14. The Ultimate lists it as 2/16. That matches up with the conflict I came across from various sources. I'll probably keep the 2/14 ones and put the others to the side for now, or at least until I find myself a card or two short of a nine pocket page. 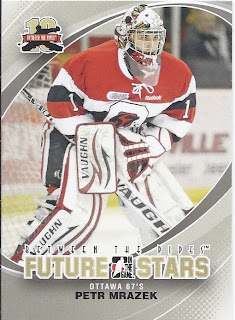 Here's another guy making his debut in the binder. Once he made his NHL debut with the Red Wings this past season, he earned a position on the birthday lists at hockey-reference. He's my second minor league hockey card in the binder.

As for folks who are already in, I'm rather proud of myself for resisting the urge to add a pile of Marion Gaborik and Milan Hejduk relics to the binder. These 3 Gaboriks will have to do, in spite of their creepiness. 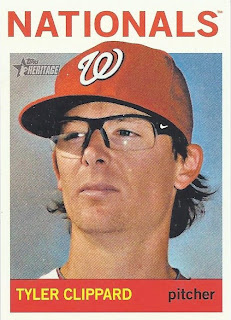 And the only baseball card to join the binder. He and Derek Norris are the only two folks with cards in the 2013 base sets so far.

Posted by buckstorecards at 05:38