The only true pack of cards I bought at the Expo was a single pack of my beloved Between The Pipes. Perhaps I'd grab a hit out of this before grabbing the base set. I didn't have any luck finding one at the show, but it was a new set. Now, I did just grab the base set on ebay for a little over $22 when shipping was figured in. So, about a penny more than a dime box raid to finish the set. Sounds good to me! Then I can hunt down singles of the hits or inserts I'm interested in once they show up on the secondary market. 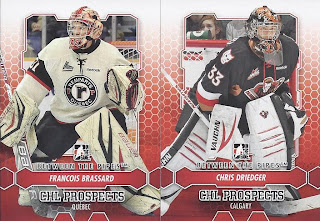 A good way to start a pack - a pair of Senators draft picks from the 2012 draft. 6th and 3rd rounders respectively. 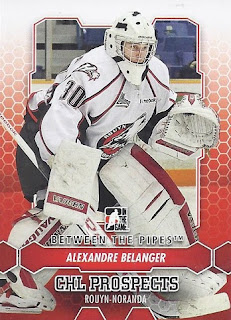 He's just 17, so he wasn't eligible for the draft this past season. GAA in the 3s and a save percentage in the high .800s for the past season in the Q. 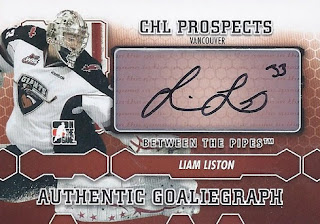 Hey! An autographed card! ITG really does a great job with sticker autographs. I don't follow the goings on in juniors outside of the OHL, so I had no idea who Liston was. This was from the second result after a google search.

Liston, 19, lasted just three months with the Giants. He was acquired June 27 for two picks in the 2013 WHL bantam draft, a third and a sixth, and it was hoped he could fill the role as the No. 1 netminder. However, he started poorly, missed a month due to injury and never hit any kind of stride.

He plans to enrol in the University of Alberta, take political science courses and then apply to law school. He insisted Thursday he is done with hockey.

Well, on the bright side, there won't be a whole lot of Liam Liston autographed cards out there. 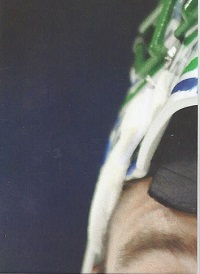 Decoy puzzle piece card. Looking at the checklist, it appears to be 1/9th of Roberto Luongo. 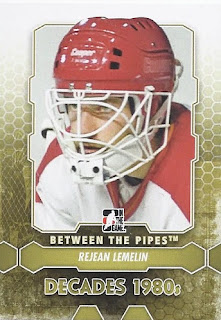 Off to the decades portion of the pack for a Flames era card of Reggie Lemelin. 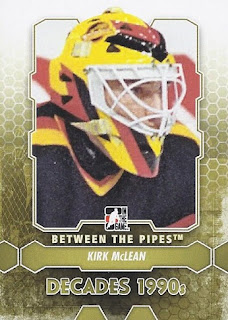 A sweet close up of Kirk McLean's mask. To the binder with you! 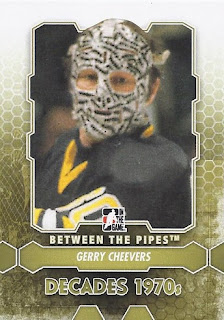 WOO-HOO! A new Gerry Cheevers photo! The proliferation of scars pained on the mask would indicate that this one was pretty late in whichever season this picture was taken during. 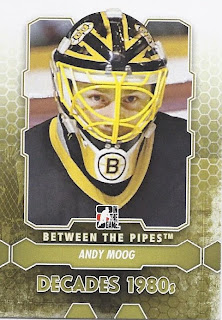 Posted by buckstorecards at 16:08