A box full of goalie cards was probably my most thoroughly searched box of the day. Let's look at another small selection of cards that I pulled out of that. 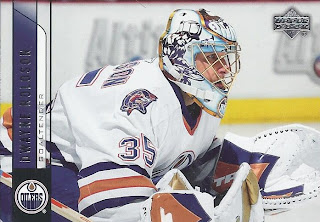 Opening up with a great shot of the mask of "Roli The Goalie", Dwayne Roloson. Not to be confused with Rollie the Goalie, Roland Melanson. A very simple, but visible design. There aren't too many ways one can incorporate the Oilers name into a mask. An oil derrick is one option, but Dwayne used an oil worker instead.  Also of note is the chin of the mask. You can see a bit of it on the front, but it is completely visible on the back. 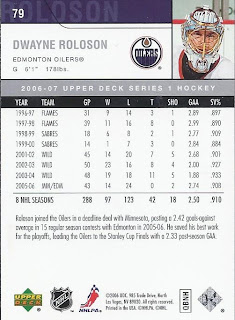 A melding of his nickname and the Oilers logo. Great idea! 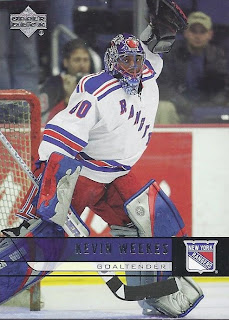 Staying with 06-07 Upper Deck, here's the card of Kevin Weekes. I might have passed on this card, but then I took a closer look. I thought the red on the mask was just a way to incorporate one of the Rangers' colours into the design. Instead, it is an apple. Given the positioning, it really makes one think of the William Tell legend. It had been added or removed at some point, since it is absent from the back of the card. 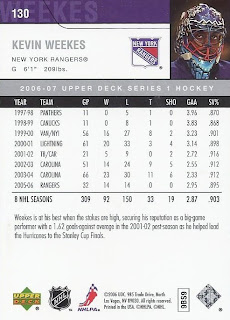 So, which came first? 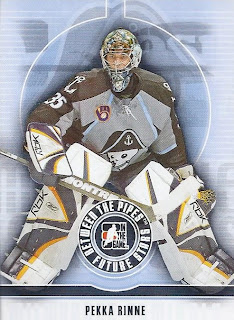 Up third is this ITG:BTP Pipes card. Great logo. Great mask with a rather disturbing sea captain front and center. And a bonus appearance of the Brewers logo as a patch. There couldn't have been too many phoots of Rinne in his Admirals gear, since this photo was re-used for a Heroes/Prospects set a couple years later. 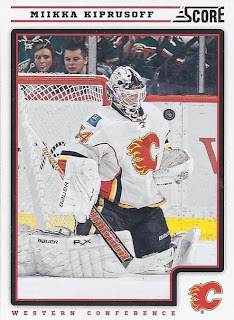 And to wrap it up, here's Miikka. I didn't grab this one for the mask, but for finally having the opportunity to slide the final card into my 2012-13 Score set. WOO-HOO! That's all 548 of 'em!
Posted by buckstorecards at 13:49