Time to start digging into the Expo boxes. Mondays for the masks. The rest of the week for other stuff, save for when the mailbag comes in with something interesting. 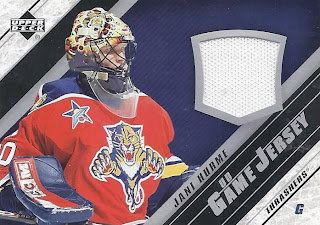 Goaltending Gallimaufry (tm. Card Boarded) to open up this post. He's in a Panthers uniform, but still sporting his mask from his days as a Senator. In fact, this might be the first three team Goaltending Gallimaufry card, as he's listed as a member of the Atlanta Thrashers. The relic is apparently a Sens one.  Although he never made an appearance with the Thrashers, due to what wikipedia defines as "Suffering from the crippling effects of hospital infections, Hurme needed over two years to recuperate." That would definitely do it. A neat card for the mask binder nonetheless. 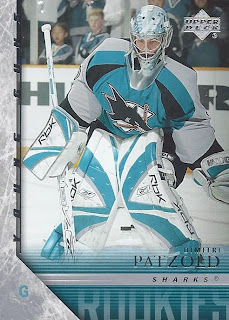 One of the tables I raided was a box labeled with $5 for 13 and a $5 for 30. This is a Young Gun, so I pulled it out of the former box as part of the booth I probably spent the most time at. A relic for what amounted to approximately 40 cents? Sure! Patzold only played 3 NHL games,  but since I didn't think I had any YG cards in the mask binder, I grabbed it. Turns out this will be the first YG card in there. 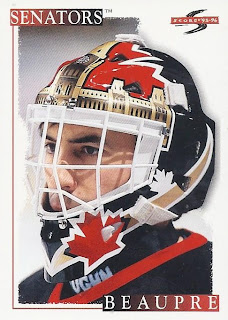 And the third pickup for the mask binder I'll show is patriotic beauty from Don Beaupre. The Don I've got in my Sens Frankenset is pretty bland, so this will probably end up replacing it.