Blackberries. Steak & Kidney pie. Peanut butter chocolate fudge. And the $5 repacks. Something a little different this time. Instead of $5 for a pack with 50ish cards and a hit, this one had two. I don't know if this was intentional or not.

And since this will be my last of these for the year, I'm scanning all the cards in them. A good thing it worked out evenly to 6 scans. 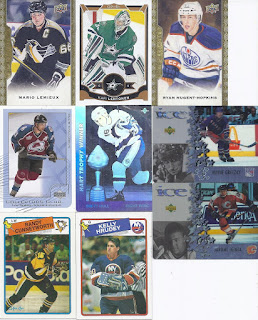 This was one of the more interesting packs. There was a lot of '15 OPC in it, but a lot of variety. The Mario was visible, and I grabbed it for that, thinking it was a high-number SP from Masterpieces. I was right! It took me a bit to work out where that Forsberg was from. It was from a 2002 Upper Deck release called Collectors Club Exclusive. They had cards for baseball and basketball as well under this design. I love the push pin design on those OPC releases, and this group of 9 wraps up with a pair of McDonalds' Ice cards from 1997. 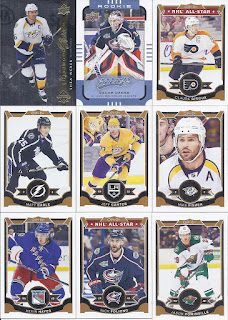 The Dansk is also a short print, and is from this year's MVP set. The Weber is an insert from last year's set. You get the first big group of OPC cards from this year, nicely highlighted by a yellow jersey on the Jeff Carter. Throwback! 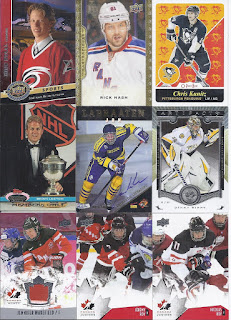 All over the place to start this group. Retro Parallels! Anniversary sets! Members Only! And the hits! Interesting, both hits are of folks that never played a game in the NHL. Jan was a 4th round pick of Calgary, but on this side of the Atlantic he never made it past the ECHL. I really like those Team Canada relics, especially ones with both red and white on the swatch. 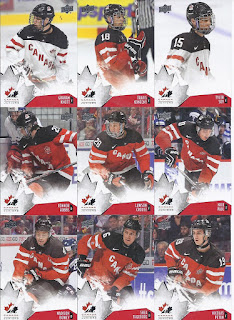 The next grouping might be my most patriotic one ever. 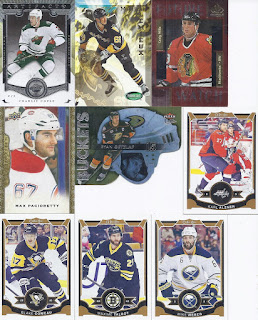 Back to some variety as I start the next page. Because of repacks, I have a lot of emerald parallels from '95 Parkhurst International, but only a handful of regular base cards. I can't complain when one of them is a Mario. I don't know why Craig Mills is in this, but it is charming in its position in this. The Getzlaf is an insert from '15 Ultra. It looks like Full Force has replaced Ultra this season in terms of being a non-hit based but still insert-heavy set. 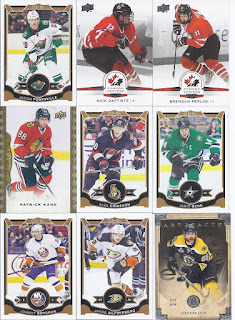 And here's the end. My only Senators card from this repack. Getting Jagr's interesting facial hair as the other visible card was a bonus, even with the SP visible at the other side.
Posted by buckstorecards at 14:53