Another repack from the Dollarama that didn't contain a pack with a Mike Bossy autograph. Oh well, at least I got $2 worth of entertainment from it. 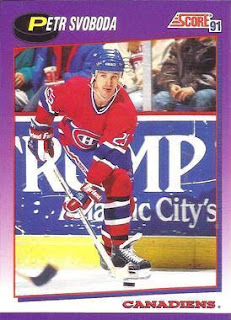 I wasn't even going to open up the pack of 1991 Score, but I'm glad I did. I was certain I already had this card in my 2/14 collection. It was very junk waxy, after all. But, my zistle hockey list told me otherwise, and into the binder it went. 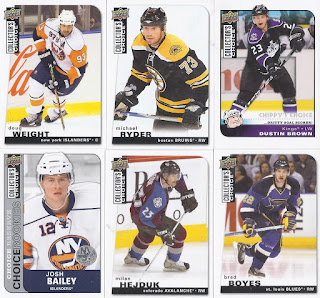 Continuing the theme of "I'm certain I had that card, but really didn't" when it comes to the 2/14 collection was this Milan Hejduk. I'd busted enough of the stuff (in repacks, naturally), but that was a need. Nice! This moves Milan to 101 cards total, and Svoboda to 19. 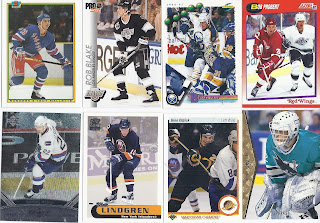 The 8 card miscellaneous pack was in there as well. I always expect them to be 8 cards from the early 90s, so it is always a suprise when some of them aren't. But I do have to go with a 90s card as my favourite in this group, with a great photo of a scramble in the crease on Brad May's. That's also my least favourite card design in this grouping though. 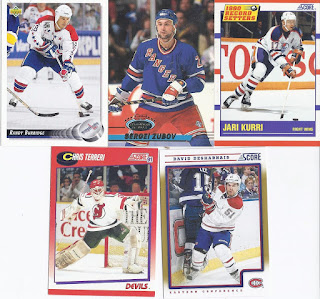 But the Hall of Fame pack was what pretty much I expected. The HOFer card is from that era with the Kurri, and more random cards. At least one was a gold parallel!

And there's another repack posted.
Posted by buckstorecards at 08:59