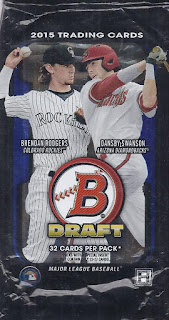 Time to bust a pack featuring recent draft picks and horrible photo shop jobs. And while I could bust a regular pack, when I'm only doing one of them, it might as well be a jumbo.

And the first card is: 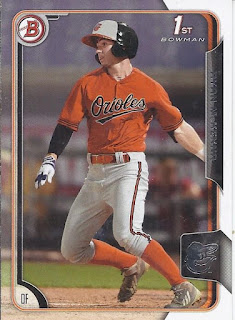 Ryan McKenna - And here it is! This is a good start to the pack. I'm not an Orioles fan, but there's a big reason I like this card... 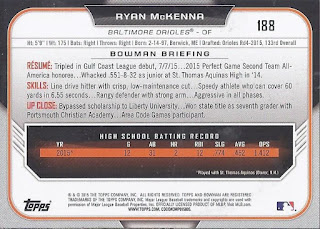 A new 2/14 guy! He also knocks 2-14-96 babies Nikolaj Ehlers and Ryan MacInnis as the youngest person in the binder, having been born in 1997. Also, there's something called the Area Code Games.
Jeff Hendrix
Triston McKenzie
Christian Stewart
Taylor Ward 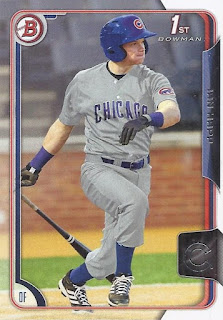 Ian Happ - Probably the worst of the Photoshops in this pack. But at least the brick background creates an illusion of Wrigleyness. 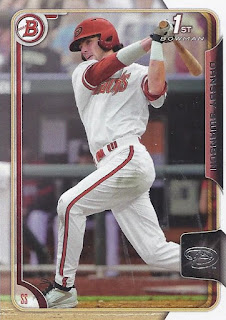 Dansby Swanson - I guess this is the base card you want.
Brett Lilek 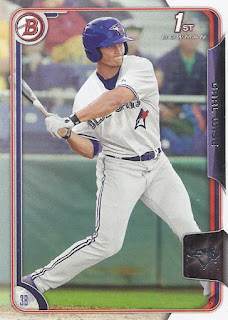 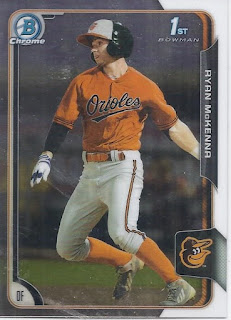 Chrome - Ryan McKenna - WOO-HOO! A base and a parallel of the new 2/14 guy on the same pack. Sadly, he doesn't have autos in this so I can't chase hits of his.
Chrome - Jeff Hendrix 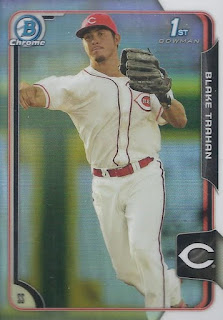 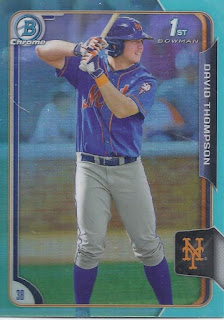 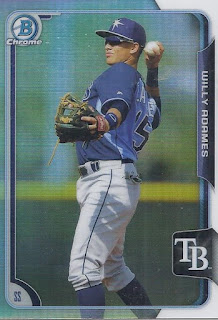 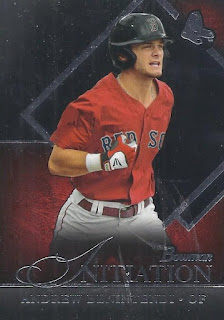 Initiation - Andrew Benintendi - While I didn't end up with an autograph in this pack, I did land a pretty tough pull. These fall at a rate of about 1 per case and are thick inserts with a nice high-end feel to them. Unfortunately, this does mean that the "packs with a special insert contain fewer cards" comes into play as this was only a 27 card pack.
Chrome - Jose DeLeon
Chrome - Alex Jackson
Chrome - Braxton Davidson 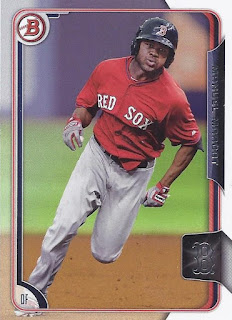 Manuel Margot - And paper cards to wrap it up. Interestingly, the first group of base cards before the Chromes were all 2015 draft picks, but nobody from the second grouping was.
Blake Snell
Josh Bell 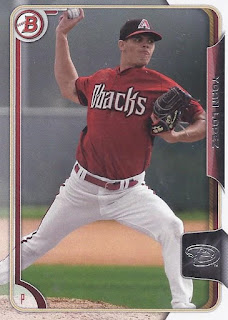 Yoan Lopez - Although he was a 2015 free agent signing out of Cuba, everybody else is from previous years.
Grant Holmes
Albert Almora
Raul Mondesi 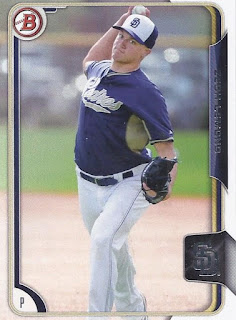 Zech Lemond - And that's the pack.

No autograph in the pack, but when you land a 1-per-case card, 2 new guys for your team PCs as well a new guy for my 2/14 collection debuting with a pair of cards, I'm very happy with the results of what might be my only pack of '15 Draft.
Posted by buckstorecards at 11:52