It is time again to show off my most recent acquisitions through the Panini Rewards program. As always, my redeeming of the points is closely followed by a break in which I get some more points. Since I pay for shipping on the cards, that's a bit annoying timing-wise. 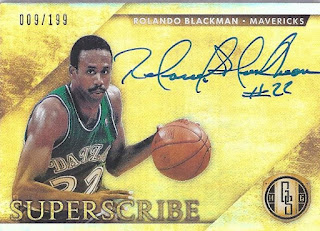 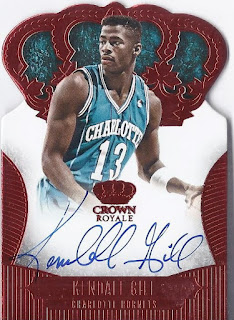 First up, not one, but two additions to my penmanship collection. Both are really nice, but I will give the slight nod to Gill. Lots of beautiful loops on both, and Blackman including his number is a plus. But, Kendall has an advantage of a shorter name that works better with the space provided. The initials are really nice as well, especially the 'G'. 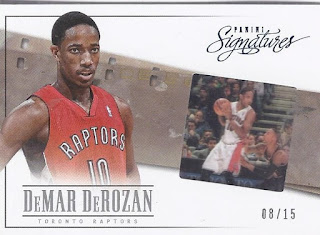 This isn't a hit, but it does feature a film cel and is numbered to 15, and it is the first of three cards to round this out that go in the Raptors binder. This also becomes my lowest numbered DeRozan card in that collection. 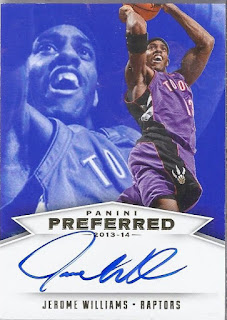 This is my third autograph of the Raptors version of the Junk Yard Dog. When I had 150 points left to spend, it was time to add another of his autos. This one is /49, and, like the Gill, comes from 13-14 Preferred. Classic Raptors purple unis are also a plus. 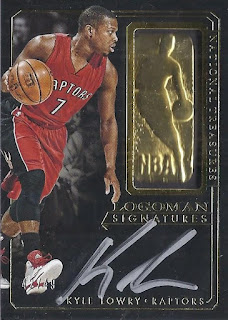 And lets wrap it up with the Raptors' all-star. Lowry may not win any penmanship awards, but it is a nice on-card silver signature. With the manufactured logo, this one card is almost as thick as the other 4 put together. I say this is for my Raptors binder, but it doesn't fit nicely into the pages. So it is now in my Raptors collection instead.

The Lowry was 250 points, all the other cards were 150. Yay for odd collecting habits.

Posted by buckstorecards at 09:27