I got into a Black Friday break at mojobreak case of 2014-15 Totally Certified Basketball. 3 Black Friday packs to go with the random slot. I grabbed a trio of slots, meaning three teams and 9 packs. The randomizer gave me Golden State, Oklahoma City and Portland. I'm going to go through these in order of how the basketball cards went from worst to first.

The Portland slot was the worst for me, and that's what I'm going to lead with. But, on the plus side, some more guilt-free cards for Kerry @ Cards on Cards.

But, before I get to Portland, here are the Black Friday cards. 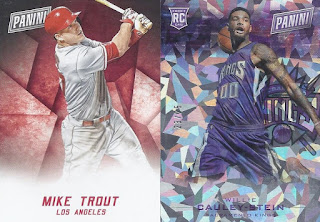 The first pack actually gave me lowest print run of the break, with the /25 cracked ice parallel of Willie Cauley-Stein. The pointy Kings logo and the colours actually mesh nicely with the cracked ice look. 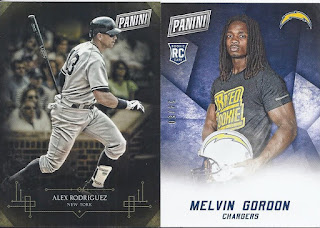 The thick parallel cards return this year. This is despite the fact that dummy cards were included in the packs, including packs with a thick card. So, that meant that a thick pack meant that you would get either a relic, or a base parallel /50, which is what these parallels were this year. 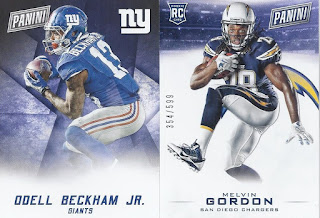 And there's still more Melvin Gordon to come with the a later post. That said, I do like the logo in the background of the cards.

And now, time for the Portland cards. 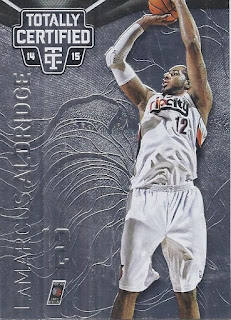 I only got one base card, but I ended up with 3 of them. 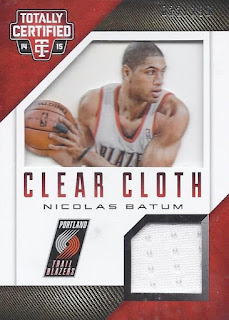 This Clear Cloth features the photo portion of the card being acetate. The red parallel is the highest numbered card in this subset, but it is nice that for this, it actually matches up with the team colours. 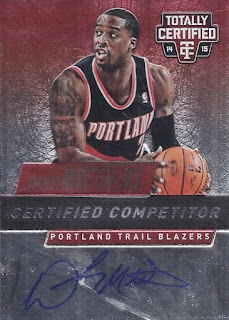 And the only other card Portland brought home for me was this on-card autograph of Wesley Matthews /99.

I didn't do that well with this slot, but I did get some trade bait bound for Portland sometime in the new year.And the WCS is a beautiful card from the BFri Packs.

And if you follow Portland, you'll notice that of the three guys I got cards of, not one remains on the team one year later, having moved on to San Antonio, Charlotte and Dallas.

Next up, Golden State!
Posted by buckstorecards at 08:53