Time to wrap this wax busting fest from blowout up. 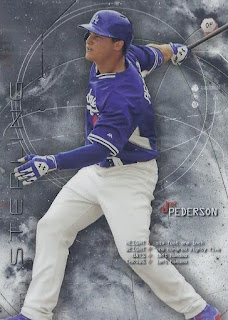 This was easily the best of the 6 packs. It opened up with a base rookie card of Joc Pederson.

And the autos. Two on-card and a Carlos Correa. No complaints about these. Flaherty was a first round draft pick of the Cardinals in 2014. He was at A ball last year, going 9-3 with an ERA of 2.84. I'm actually lucky to have landed an on-card here, as many of the autos at COMC were stickergraphs. More accurately, only 2 of the 22 base autos there were on-card. Kyle Freeland's numbers at A weren't on par with Flaherty's, but an on-card auto is always nice of someone slowly advancing through the minors. And Carlos Correa speaks for itself. 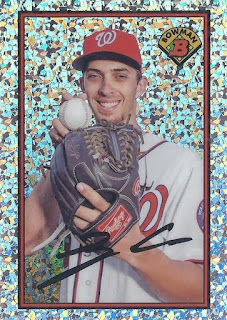 I was due one of these Bowman is Back cards in the box, and it waited until the final pack until A.J. Cole appeared.

And there you have my foray into a relatively expensive product by my standards. With a Correa and a Conforto, I'm pleased with the results, despite the lack of any colour among the autos.

Tomorrow, the mailbag catch up begins!
Posted by buckstorecards at 17:23