With those boxes finally busted and posted, it is time to finally start posting the goodies from some envelopes that have arrived at my place over the past couple weeks. I'll work through these on order of arrival, but will limit them to one scanner bed worth of cards for each of the envelopes.

The first of these, from Jeff @ 2*3 Heroes has been sitting around for about a month awaiting my posting. Call it a mix of laziness and disogranization. 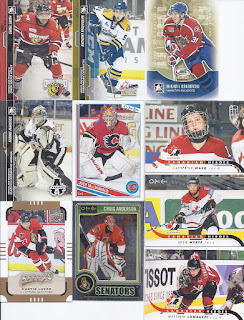 I've developed a love for AHL/CHL jerseys over the past little while, and this package had a good number of them. My favourites here are the Owen Sound Attack and the sorta departed Hamilton Bulldogs. Masks make an appearance here, along with some Senators content. The Lazar features yet another appearance of Popeye on a 2015-16 hockey release. And more Canadian Heroes content! A great little envelope! 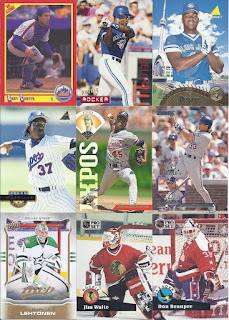 The second of three envelopes was from Adam @ Cardboard Clubhouse. Prior to the Expo, he contacted me wanting some WHA cards of the Cincinnati Stingers. I found some, and sent them out. A return package arrived not that long afterwards. I always love adding fresh Carlos Delgado cards to his binder, even though Rookie Rocker doesn't really have the same RR power as Rated Rookie. There were a pile of Expos in there as well, all but one of which was a need for the binder. It wrapped up with a bunch more mask binder cards in there as well, with additions to both my pre- and post- 2005 binders. 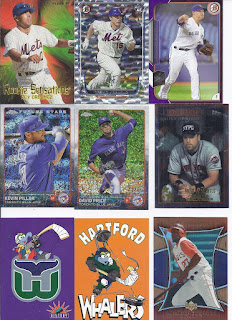 And finally, a PWE from Shoebox Legends arrived on Monday. Since David Price won't have too many Blue Jays cards available, this one is my favourite here in a group with lots of to love. Other greatness is the appearance of Gonzo, a hero hat and a very derpy Aaron Sanchez.

So, thank yous all around for these great mailings, and I hope that your next ones don't take as long to get written up!
Posted by buckstorecards at 13:21