For those that didn't think Hoops was low end enough for a basketball release, Panini issued Complete. The configuration is very much like Upper Deck MVP hockey, minus the SPs. 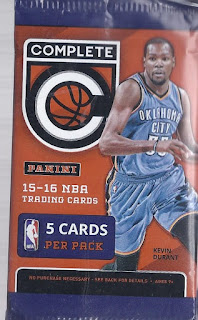 5 cards in a pack. 4 base. 1 silver parallel. Gold parallels fall one to a box, as do inserts. There are hits, but the autographs fall at a rate of one per case. I grabbed two packs of this. 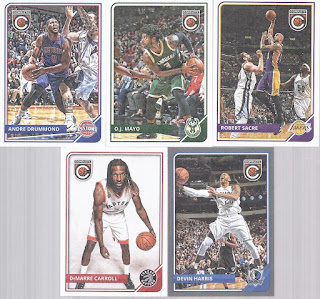 Here's the first pack. Out of 5 cards, landing my first one of DeMarre Carroll in a Raptors uniform, and some CanCon in Robert Sacre is a good way to start. It is also nice to see they didn't scrimp on quality photos, as the Ebanks is a pretty nice shot . 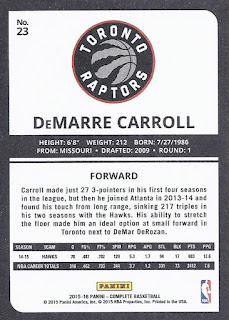 Card backs are actually a little colourful with the team logos. In retrospect, maybe I should have scanned one with more than just a hint of red on the team logo. 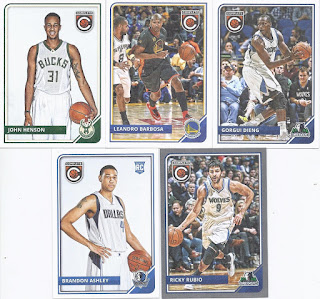 Pack 2 isn't quite as interesting for me, but I do like adding the rookie card of Brandon Ashley. He didn't make the team with the Mavericks out of the pre-season and was waived. He's in the D-League now, so this might end up as his only card in any sort of NBA uniform.

My only complaint about this is that the stock used is really thin. 1988 Donruss level thin. But for a set like this and at a low price point, that's a minor beef when one gets a fun, inexpensive break.
Posted by buckstorecards at 01:10