Since Target shut down in Canada, I really haven't done the blaster thing much. Just one baseball one earlier this year and that's it. But, at the local show this past weekend, there were a few $10 blasters around. I opted for this: 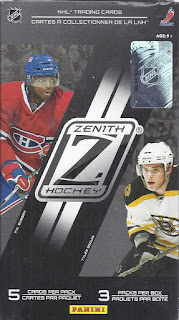 Not sure why. I think it is just that I didn't want a lot of base cards from a set I don't plan to build. But, you get one hit per blaster, so let's see what it yields! There was a thick pack that I assumed would have the relic, so 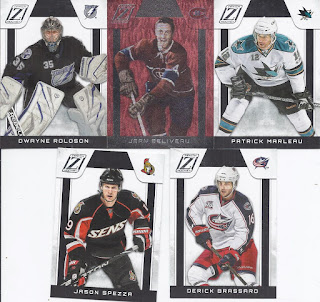 A nice start, landing a new Jason Spezza for my Senators collection. The Beliveau is a Red Hot Parallel. Nice to get a parallel where its colours match the team colours. 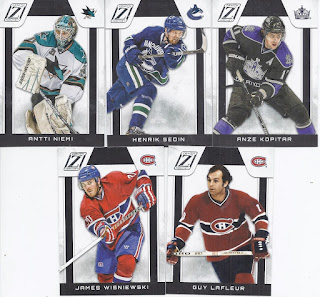 Just base here, but I did land a card from the legend portion of the set. There are interesting picks for this 25 card portion of the set. Nick Fotiu has a card. Cam Neely is there, but on the Canucks. Derek Sanderson is with the Blues. Trevor Linden is a Hab. I don't think anybody would think of those guys on those teams primarily. 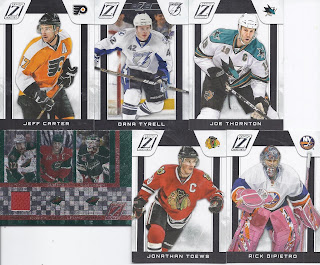 And there's the hit! Only a single swatch, but if I had to choose between Clutterbuck, Koivu and Backstrom for it, the provided Cal Clutterbuck red swatch would be my choice. This pack also contained a /999 rookie card of Tyrell. As well as that DiPietro card where he's rocking the alternate pink pads. They also make an appearance on his Upper Deck base card in 2010. Just a base card, but an oddball for the photo choice as well.

And that's the blaster!
Posted by buckstorecards at 13:52