I hunted down some Tampa Bay Lightning goodies at the Fall Expo, and the return package came my way this past week. This will leave two mailings to go through once this is posted. 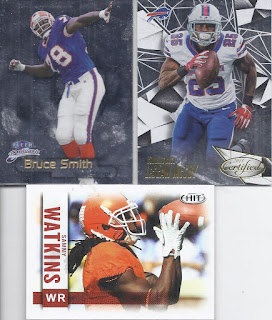 As I type this up, the Bills are sleepwalking their way through a game against Washington, losing 21 points. Still, I lead with the Bills cards. And yes, the Watkins is a Biills card. Sure, he hadn't even been drafted by Buffalo when the card was released. Still. It is a Bills binder card. The Bruce Smith is a reminder that I will be cleaning my scanner eventually. Perhaps my New Year's resolution.

Alshon moves only 1 card behind Steve McNair for second place in the 2/14 collection with these cards, placing him with 34 appearances. 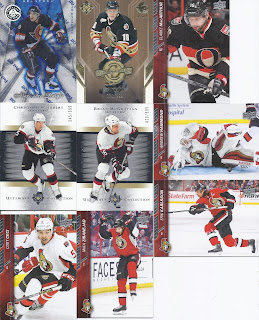 Time for some cards from Tampa's expansion year brethren, and my favourite team, the Ottawa Senators. This does give me the entire Ottawa Senators non-YG base set from UD's flagship set, and a quartet of numbered Senators cards. I completely blanked that Daigle was still with the team when 1997 rolled around. 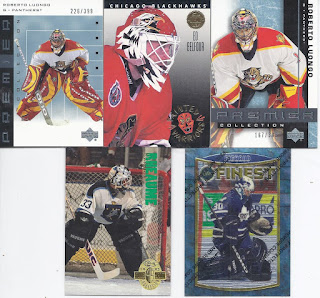 Mask binder randomness! The best thing is that all these will move into my pre-2005 binder, which is by far the sparser of the two. 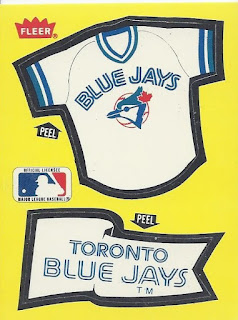 What a perfect card (OK...sticker) to segue into the Blue Jays cards in this trade. 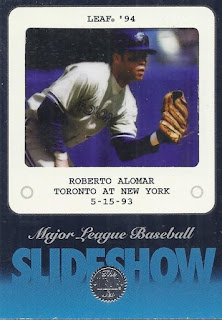 Not only is this a great looking card with the film cell, the photo is dated as well. Really cool! 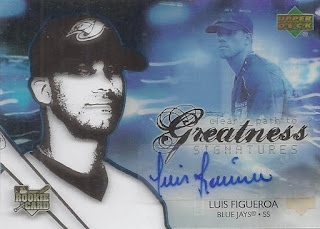 Luis only played 6 games for the Jays, but at least he has decent penmanship.

And the big one: 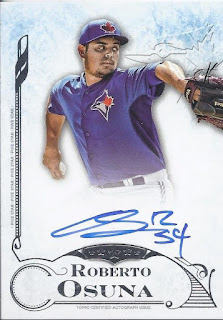 And I mean it literally. This super premium high end card is THICK. As thick as about 8 regular base cards combined. But this is my first auto from their rookie 2015 closer, and I'll gladly find a way to squeeze it into my Jays binder.

And there you have it! Thanks for the goodies, and I hope my PWE has arrived in Florida!

Posted by buckstorecards at 11:39